Traction is so overrated.

A motorcycle is not meant to slide. It’s unnatural. You have to make it happen. And whether it happens by mistake or by skill, it’s one of the single most exhilarating sensations a human body can experience. You are on the edge of traction – crashing, but not crashing. This is flat track racing. 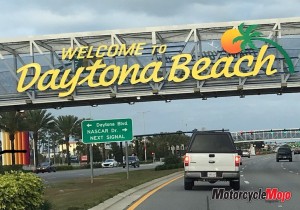 I grew up racing motorcycles in Eastern Canada in the late ’70s and ’80s during a period when the American Grand National Championship flat-track racing was in its glory days. Roberts, Springsteen, Shobert and my favourite racer of all time, Ricky Graham, were legends in their prime. Although I’ve spent more than 40 years racing motocross, road racing, supermoto, ice racing, desert rally and off-road, the addictive sliding sensation of American flat track is what appeals to me most.

So in early March, I buy a little van, throw my old Honda dirt tracker and a bunch of stuff in the back and drive the 3,000 km from snow-covered Moncton, N.B., to be a part of the 78th Daytona Bike Week.

On March 14, the Daytona TT kicks off the American Flat Track (AFT) Championship series. The track has been moved to centre stage within the Daytona International Speedway in the same location that the Supercross track was a week before. Leading up to the TT, Florida becomes a hotbed for training, support racing, promotions and everything flat track. New race teams are gearing up to tackle the summer-long race series all over the U.S.A.

Resurgence of the Sport 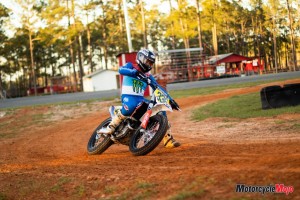 Flat-track racing is enjoying a rebirth. AFT has reconfigured the classes to Pro Twins and Singles, added better and more venues and attracted an audience with online technology. You can watch every race live and for free on fanschoice.tv. With that renewed interest, sponsorship continues to grow. More motorcycle brands are involved than ever before. The fields are deep and racing is always bar-to-bar and thrilling. With all that, the series hasn’t lost its grassroots feel of Saturday night at the county fair.

After three days of driving down the eastern seaboard, I am rolling through the picturesque rural landscape of central Florida. The endless fruit production and pasturelands hide the fact this is a significant dirt-bike neighbourhood. First, I roll past the gates to Bakers’ Factory, where KTM’s professional Supercross racers train. Close by, there is El Chupacabra Ranch, the private training facility of pro racer Blake Baggett. I follow my instructions and let myself in at the private gate a little farther down the road.

This is home to Johnny Lewis and Moto Anatomy. You quickly see this isn’t farmland. Race rigs and trailers, dirt ovals of various sizes, motocross tracks and motorcycles of all breeds litter the compound. Racers from all over are here for one purpose: to get faster on a race bike under the tutelage of Lewis. Jeffrey Carver Jr., an AFT Pro Twins Championship hopeful, is pounding laps on a motocross bike. MotoAmerica road racing champion Alex Dumas, from Quebec City, is integrating dirt-track training into his program as he prepares for the Twins Cup Championship series. Pro Supersport road-racing champion Cory Alexander, from New York, is spending his days on motocross and dirt-track trainer bikes and putting the final touches on his new Kawasaki 450 AFT Singles bike for the Daytona TT. And me? Well, I’m just happy to be here, visiting the Lewis family again and going around in circles on my Honda. 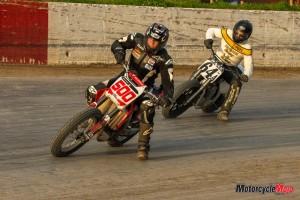 I was led to Lewis a few years ago as I was preparing to race the Pikes Peak International Hill Climb. I spent four days in a one-on-one dirt-track training program designed to improve my skills on a 200-hp mountain road racer. Lewis uncovered 40 years of bad body position habits on the first day back then that I’m still working on. And I never knew you could accomplish so much with a rear brake.

A transplant from a hotbed of dirt-track racing in Pennsylvania, Lewis moved his family to Florida in 2014 with the vision of offering professional racer training. Turning 30 years old this year, he is still a threat anywhere he laces on a steel shoe, as his recent podium at the Texas Half-Mile demonstrated. But his heart is more focused on sharing his riding and racer prep knowledge and helping to develop the sport.

We head to Orlando for the day for a special project. Motorcycle racing legend Jeff Ward, at 57 years old, has decided to race all of the TT-style races on this year’s AFT series, beginning with the Daytona TT – an idea spawned during an impromptu outing at a Moto Anatomy school in Southern California last year. We arrive early at Standard Motorcycle Co., about the hippest little shop on the planet, to ready Ward’s Daytona TT bike. Boxes and boxes of flat-track specialty parts are installed on a Moto Anatomy trainer bike until it is AFT Singles-legal and ready.

The next day, we land at Cross Roads Speedway in Jasper, Fla., for a day of testing at one of the state’s most favoured short tracks. Lewis organized the day and invited a list of racers preparing for the Daytona TT. I am happy to be invited to get some seat time and mix with AFT stars Jeffrey Carver Jr., Brandon Robinson, Brandon Price and Jeff Ward. Besides a rained out event last year in Quebec, my last-dirt track race was in California in 1999. I have to admit I was giggling in my helmet as I chased Hall of Famer Ward around the clay oval.

“You’re never going to turn that bike if you don’t get that leg out,” mutters Lewis as he walks past me in the pits. He doesn’t miss anything. He’s always in motion, maintaining the track and observing the riders, his cellphone either at his ear or pinging endlessly with incoming texts and emails. Get a tire to this guy; that guy needs a bike; these people need a place to stay; a new sponsor inquiry; new course signups; interviews; talk-show host offers; come teach in our country; etc.; etc. Being well connected in the sport of flat track comes at a price, but I’ve never heard him say no. With the season opener in his hood, he is in demand.

After the Daytona TT, Moto Anatomy hits the road for training schools that are selling out all across the U.S.A. and Canada. Last year, Lewis was invited to give a school in the U.K. for members of a start-up flat-track series there. He’s returning there this year and adding the Netherlands and Greece to his trip. He consults with a start-up series in Brazil. Saudi Arabia has called!

Flat-track racing is as American as apple pie, but was mostly misunderstood by the rest of the world until dirt-tracker Kenny Roberts showed up in Europe and won the World Grand Prix road-racing championship in 1978. Americans Eddie Lawson, Wayne Rainey, Kevin Schwantz, Kenny Roberts Jr. and Nicky Hayden all cut their teeth on dirt tracks and went on to win the world title. Today, most of the world’s elite motorcycle racers integrate dirt track into their training program. I think it’s a matter of finding and getting used to riding a motorcycle on its last breath of traction. As Lewis puts it, “You are basically almost crashing all of the time.”

Before the Daytona TT feature race, there are three days of racing in the AMA All Star National Flat Track series going on at the Volusia Speedway Park in central Florida. Two days are on the fast half-mile banked clay oval and one day on the short track. The grids are full, with more than 300 entries travelling from far and wide to enjoy Bike Week and the sunny south.

My stock-engine Honda doesn’t have the horsepower for the big track, claiming a fourth and a fifth in the main, but is well suited for the short track, on which I manage to win my heat race and the main event. I am happy enough just keeping myself off the ground for three days, as I just had the plates and screws removed from my shoulder from my last getoff, cartwheeling my rally bike off the side of a mountain in the 2017 Fundy Adventure Rally.

The next morning, I flash my media pass at the gate and proceed to drive under Turn 1 of the famed Daytona International Speedway, through the tunnel and into the pit area. It’s race day – the 2019 Daytona TT. I meander through the race garage pits like a true fan-boy, glad-handing and snapping pictures and selfies with any of the AFT stars who will tolerate it. The mood definitely is elevated and everyone has Race Face on.

The Moto Anatomy garage houses its two entries in the AFT Singles class: the No. 336 of Ward and the 122 of Dalton Gauthier. Gauthier, a 20-year-old from Pennsylvania, won this event in 2017. Both KTM school trainer bikes are well prepped, but have stock engines giving the bikes a pretty big disadvantage on the long, asphalt front straight of the new track format.

Qualifying to race the main event is no easy matter, with almost 70 entries and the final grid allows only 16 bikes. Ward is fast, running just outside the top 10 in qualifying lap times. Ward, usually a gifted hole-shot guy, unfortunately gets bumped, crowded and buried off the start of his heat. And with that, his day is done. There is no recovery from a bad start in flat track, with the top 20 bikes running within the same lap time’s second. Gauthier recovers from a poor qualifying time, puts himself in the main event and pulls off a second place after leading for a while. Very impressive for a thrown-together deal on a stocker, thanks to Lewis. Look for this kid in Victory Lane all season.

The Pro Twins main has some drama. With JD Beach and the No. 1 plate holder, Jerad Mees, crashing out early, No. 44 Brandon Bauman takes his Indian program to a new level and a victory.

Just because I don’t want my gypsy tour to end yet, I stop in at Senoia Raceway, just south of Atlanta, on the way home. They call this place the Baddest Bullring in the South, a fast, high-banked, black groove, clay flat track. Saturday night racing under the lights with full stands just can’t be beat. A front-row start and a second place in the main is just a bonus.

Three days later, with my van’s odometer having tracked a 7,900-km round trip, I roll to a stop in my driveway, which is lined with snowbanks more than a metre high. And thinking to myself: “That’s how you do Daytona Bike Week.”