There’s nothing like an advanced riding course to brush away the cobwebs and retrain your deteriorated muscle memory.

No matter what you’ve done in your life, you had to begin somewhere – and riding a motorcycle is no different. You may be a new rider or, if you’re like me, you’ve been riding for several decades. I received my motorcycle licence before motorcycle training was a thing, or at least before I ever heard of it in the small city I grew up in during my formative motorcycle-learning days.

Times have changed. Now there are hundreds of training centres around the country and most riders these days have taken some kind of basic motorcycle rider training. But there is still a lot to learn – that’s why it’s called “basic.”

To get the most out of your motorcycle riding experience, you may want to consider upgrading your skills. There is a saying that goes something like: “You don’t have 20 years’ experience; you have one year’s experience repeated 20 times.” Those 20 years could mean you’ve been riding on straight highways for that time – and that’s not gaining experience; that’s repetition and not pushing your skills to the next level. 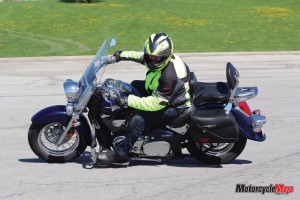 You should never stop learning, even if you have decades of riding under your belt. Everybody develops bad habits, and one way to rid yourself of those bad habits is to take an advanced training course periodically and be critiqued by a professional instructor and, therefore by design, upgrade your abilities.

One of the hardest things to master on a motorcycle is proper technique. Smoothness is important in every single action you perform on a motorcycle; this is especially true for braking, accelerating and cornering. But technique goes deeper than that because each of those actions can change the steering geometry of your bike if not done correctly, thus upsetting your bike’s natural handling characteristics that were designed into it. An advanced course shines the light onto just how much there is to learn after basic training.

Other than a marathon ride from Ontario to British Columbia and back last fall, I didn’t ride much in 2018 due to shoulder surgery that prohibited getting on a bike. After the downtime that winter brings, and then for almost a whole summer, I felt rusty – plain and simple. I felt nervous during my first rides before heading across the country and desperately felt I needed to upgrade my training or, at the very least, take a refresher course.

I’ve taken a variety of courses over the years, and I believe there is always something to be gleaned from proper instruction. Despite my rusty reflexes, I knew the muscle memory would return with proper training, so I decided on an advanced training course to clear the cobwebs from my head and build on my many years of experience. Total Control Advanced Riding Clinic is one such course: it takes you to the next level in your quest to be a more competent and safer street rider. 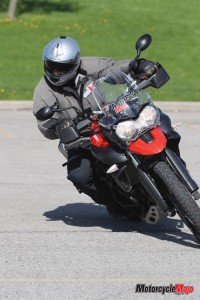 I took the course from Sharp Rider Motorcycle Training in Toronto. Donna Skinner, her husband, Randy McKnight, and Paul Rogers own Sharp Rider, a licensed Total Control training centre. Skinner and Rogers also own gtamotorcycle.com, a well-known motorcycle forum based in Ontario but with membership across the country. Skinner, a little discouraged from seeing so many posts on the “Fallen Riders/In Memory of’ section of the gtamotorcycle forum, realized there was a need for such a course because there wasn’t any advanced street rider training that bridged the gap between basic rider training and racetrack training. That was the impetus to start Sharp Rider in November 2011 and pursue licensing to use the Total Control curriculum in spring 2012.

The Total Control Advanced Riding Clinic is the brainchild of Lee Parks. Parks is no stranger to the world of motorcycles: he is a national race champion, instructor, motorcycle writer and editor, photographer – and the list goes on. Suffice to say he knows a thing or two about motorcycles and how they react to rider inputs, and how to train riders to implement those inputs properly.

The course operates with an instructor/student ratio of six students to one instructor so that proper attention is paid to each student. The class I enrolled in was the first of the season and was full with 12 students. Students bring their own bikes, so there was a wide variety of motorcycles styles, ranging from touring to sport-touring, adventure-touring to sport bikes – all street bikes are welcome.

While Sharp Rider is the only licensed Total Control school in Canada, Skinner says, it is totally mobile and can teach its intermediate and advanced courses anywhere provided there’s a parking lot. However, two of the students in my class, Greg and Isabel Tees, rode all the way from Nova Scotia for Level 1 on the Friday and stayed for Level 2 training on Sunday. 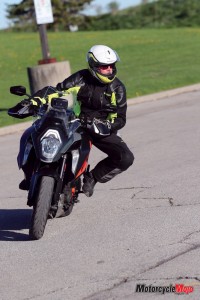 Total Control’s training mandate follows the principle of crawl before you walk and walk before you run. That starts in the classroom and then, after each segment, moves to the range where you put the classroom theory to work.

The stepping stones to becoming a better rider that are learned in the one-day Total Control Level 1 course are through a series of modules that include:

2. Concentration, so you can assume…