» Articles, August 2019, Features, Issues » Riding into the Next Century

Riding into the Next Century

Soon to be 100 years old, Mr. Betts isn’t going to let a little thing like age stop him from riding his Gold Wing.

On the family property near the hamlet of Wentworth in Cumberland County, Nova Scotia, “Bun” Betts and his older cousin tinkered with an old Indian V-twin motorcycle. They’d checked and cleaned the plugs, adjusted the timing, added fresh gasoline, set the spark advance and hoped for the best. Betts pushed the bike down the lane with his cousin at the controls, and the Indian barked to life.

“I was 12 or 13 years old then,” Betts says. “And that’s my earliest memory of a motorcycle. I never did ride it myself – I was always either pushing it to get it started or sitting on the back of it as we roared down the road.”

Born on August 15, 1919, Betts’ full name is Charles Wyman Betts. When he was just a toddler, he says, he got pneumonia and almost died.

“The doctor, he’d given up on me,” Betts says. “But it was the nurse who tried something that broke the pneumonia. After that she called me her little bunny – or Bun for short – and the nickname stuck. My mother called me Wyman, but nobody around here knew my real name. I was Bun to everyone.”

A Long Line of Hard Workers 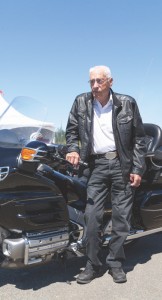 Betts comes from a family of hard-working people. He says his grandfather, Baynard, was a stowaway aboard a schooner.

“He was nine years old when he got on the boat somewhere overseas and hid among a bunch of molasses barrels,” Betts relates the story he was told. “They found him there and, of course, they couldn’t turn the boat around. When they landed in Halifax, he found his way around and, at some point in time, got an education because he went on to own and run a general store with his wife in the Wentworth Valley area and raised a family of six children, including my father, Arthur.”

Betts continues: “I had to start working myself when I was nine years old. My father was in the logging business, and we had a mill called A.T. Betts and Sons. I clearly remember that it was Arbor Day, and we were off school. I went to the mill that afternoon, and that was the day my father lost his hand in a workplace accident.”

While the two events weren’t connected, after that tragic incident, Betts began helping out at the mill. When he was through school, Betts says, his whole life became dedicated to the job. He’d work the saw, cutting the logs and milling the wood into dimensional lumber that was then sold to a wholesaler. When the pond at the mill would freeze over, Betts would go to work at the local ski hill, moving snow or tuning skis. He sold the mill when he was 70, but continued working there for several more years.

While he recalls his cousin’s Indian, it wasn’t until Betts was in his late 20s that he invested in a ride to call his own. It wasn’t a motorcycle, however. What Betts bought to travel the half-mile from the family home to the mill and back was a new 125 cc Vespa scooter with a pressed steel, step-through chassis and 10-inch wheels.

“I think that lasted about one summer,” Betts says of the diminutive form of powered two-wheeled transport. “The scooter didn’t work out as well as I thought it might have.”

Years later, Betts returned to motorcycles. But first, he had to get flying out of his system. When Betts was in his early 50s, he bought a Cessna 172. He learned to fly and would pilot the Cessna over Wentworth Valley and other parts of Nova Scotia, simply admiring the verdant landscape laced with rivers and dotted with ponds. 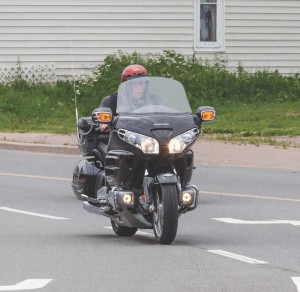 Then, he got a small Honda motorcycle. He can’t recall the exact model, but he kept it for only a couple of years before moving up in the early 1980s to a Honda GL650 Silver Wing Interstate. (That midsize touring bike was introduced in 1983 and was based on the GL500 Silver Wing, introduced in 1981, which in turn was based on the manufacturer’s earlier CX500 model; each of those bikes had a 80-degree, liquid-cooled transverse mounted V-twin engine, five-speed transmission and shaft final drive. In 1983, Honda dropped the GL650, the manufacturer’s remaining midsize touring motorcycle from its lineup.) Betts kept his Silver Wing for two or three years before moving up to a 1200 Gold Wing.

Evenings or weekends, when Betts wasn’t flying his Cessna or crafting impressive grandfather clocks made of oak and other hardwoods, he was riding – but only when the weather was warm and never when it was raining. “I’m not a wet-weather rider; I only like the summer sun,” he says with a laugh. “And I never ventured very far, because I couldn’t stay away from the mill for very long. And then winter would arrive, and you don’t ride in the snow.”

Gave Up Flying, But Not Riding

When Betts reached the age of 80, he sold his airplane, but, as he approaches his 100th birthday, he continues to ride. His current motorcycle is a 2003 Honda Gold Wing that he bought used with only 1,000 kilometres on the odometer. Betts rides in a well-used leather jacket adorned with a Defenders Motorcycle Club crest, an open-face helmet, good gloves and some heavy sneakers. He prefers to get aboard his Gold Wing from the high side, or from the right rather than the left. While the bike is heavy, he says, he has no problem getting it off its side stand and, with its 1,800 cc powerplant, Betts is impressed by the power.

“I’ll get the bike out on the driveway and when I get to the bottom, I’ll decide whether to turn left or right, then I go wherever the road takes me – and they’re all good roads around here,” he explains. Obviously, he likes to ride because his ’Wing’s odometer currently shows almost 69,000 kilometres. “I like the two-lane roads where I can go 70 to 80 km/h,” he says. “That’s where I’m comfortable, and you can just get out and watch the countryside roll by.”

However, on a Tuesday evening, one of his favourite places to head out to is Bike Night at Masstown Market in Masstown. He enjoys visiting with others and talking about motorcycles, and always buys a 50/50 ticket. The proceeds from tickets fund a summertime picnic – and he appreciates attending that too.

Of his age, Betts says, “One hundred is just a number. I feel fine, but I do get tired a bit more easily than I once did.”

He waxes philosophical when he talks about his approach to life: “I’ve never been one to make plans. Tomorrow’s another day, and I’ll always take it if it comes…”