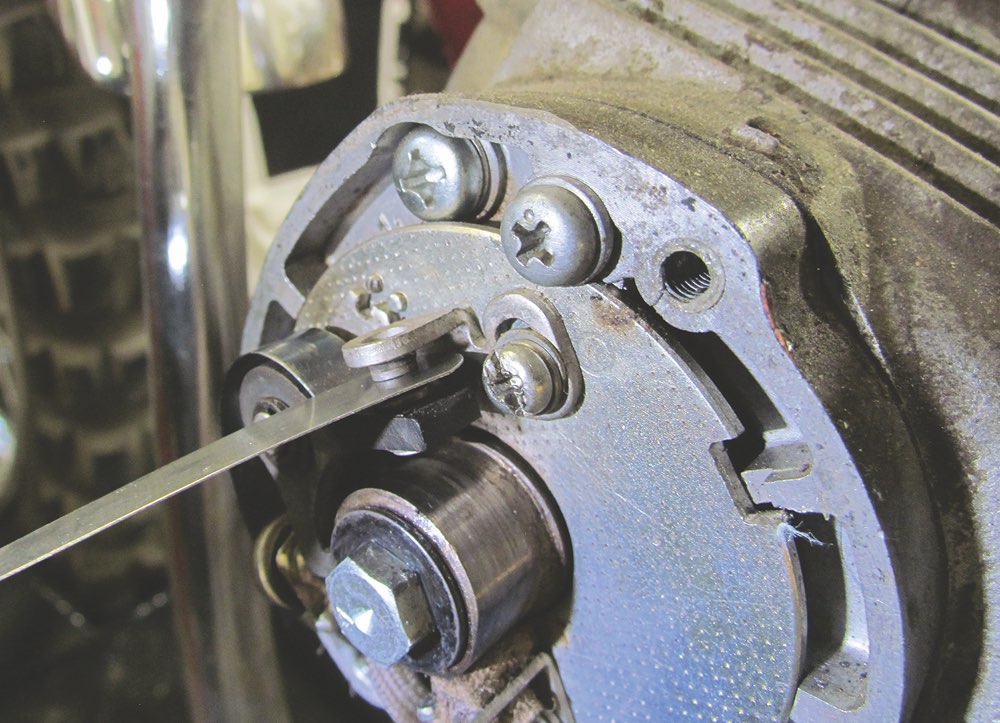 Accurately setting the points is critical for proper engine performance.

If you own a bike that’s more than four decades old, chances are it has ignition points. Electronic ignition systems replaced mechanical points in the early 1980s, and with that change came relief. Ignition points need constant servicing for trouble-free running. Neglecting points causes problems, from a hard-starting engine to an engine quitting in the rain. Servicing the points isn’t very complicated; taking a little time to do it once a year will prevent a roadside breakdown.

How does a points ignition system work? For simplicity, I’ll describe a single-cylinder system. The main components in a points ignition system are the spark plug, ignition coil, condenser and points. A coil is what generates the high-voltage electricity needed to jump the gap at the spark plug and ignite the fuel mixture in the cylinder. There are primary and secondary windings of wire within the coil that wrap around a metal core. When current passes through the outer, primary winding, that generates a magnetic field. To generate a spark, power must be cut off at this primary winding, thus causing the magnetic field to collapse toward the metal core. As the field collapses, it passes through the inner winding, which generates a brief high-voltage jolt of electricity, which then flows to the spark plug. 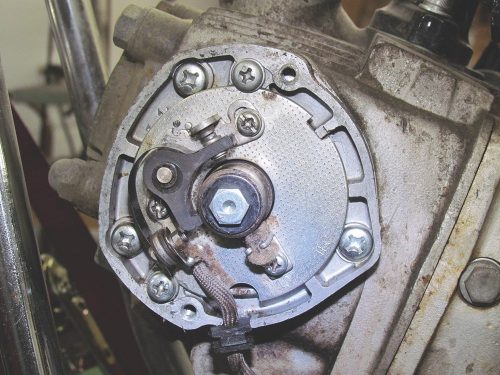 Timed properly, the lobe pushes the points open as soon as the timing mark on the crankshaft aligns with its mating mark on the crankcase. These marks usually are identified by a T (for top dead centre [TDC], which is when the piston is at the top of its stroke) and by an F (for fire, which signifies the time the spark should take place in the cylinder). The F mark will always precede the T mark by several degrees, since combustion must begin before the piston is at TDC.

The first step in servicing the points is to inspect the contact surfaces for pitting and to see if they are burnt; in either case, they must be replaced. Also replace the condenser, because its job is to protect the points from surges in voltage when they open; otherwise, they burn. Points having a grey, dull finish is normal, and it can be cleaned off with a very small, fine file or with 400-grit sandpaper, although the points must then be cleaned thoroughly. 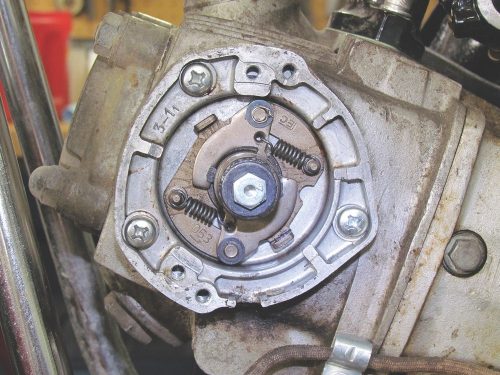 Whether new or freshly resurfaced, the next step is to set the gap when the points are open. To do this, you must turn the engine slowly by hand (using a wrench on the end of the crankshaft) until they are fully open. These specs are found in the service manual; on the ST90 the gap is .012 to .016 inch. Setting the gap requires loosening the points’ mounting screws and tweaking the points using a small, flat screwdriver on nubs and notches dedicated to this purpose. Once the gap is set, you can adjust the timing.

To do that, you must line up the F timing mark with the cylinder on its compression stroke by placing your finger over the spark plug hole and feeling for escaping air as you turn the crankshaft and align the timing mark. 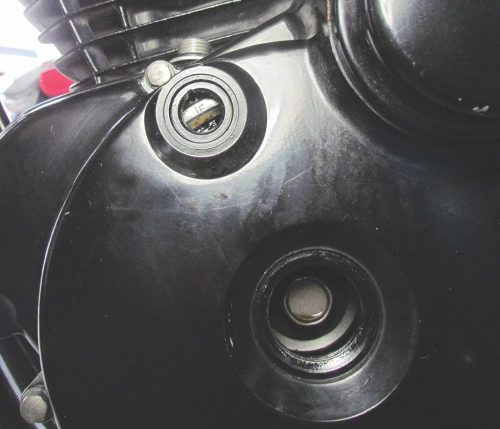 The easiest way to time the points accurately is to disconnect the wire coming off the points that eventually leads to the primary side of the coil, then use an ohmmeter to test for continuity by connecting one lead of the ohmmeter to the end of the wire and the other lead to ground. I use an ohmmeter that beeps when there is continuity so I don’t have to look at it while I set the points. Set the timing by pivoting the entire points-mounting plate – again, use a flat screwdriver. I’ve hit my mark as soon as I hear the beeping of my ohmmeter stop, indicating the points have just opened. After tightening the mounting screws, the timing is set. On multicylinder bikes with more than one set of points, this entire process must be done for each set of points.

While you’re in there, remove the entire mounting plate before adjusting the points and inspect and clean the advance mechanism. Replacing the points cover gasket also is a good practice.