In May, BMW showed off a unique concept bike at the Concorso D’Eleganza Villa d’Este, on the shores of the Italy’s Lake Como. The show, which features mostly historic vehicles, has been held since 2011. 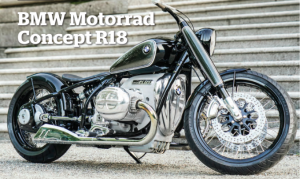 The Concept R18 is a long, low-slung custom bike with styling that harks back to the BMW R5 of 1936. All of the historic stylings are there: the twin downtube cradle frame, the exposed drive shaft, the rigid-look rear frame, the solo saddle. The spoked wheels measure 18 and 21 inches. The air-cooled boxer continues the historic theme, breathing through a pair of Solex carburetors. However, the 1,800 cc engine is an entirely new design, although it won’t likely reach production in it’s current form, given that emissions standards put to rest the carburetor a long time ago.

“For me, motorcycles like the BMW Motorrad Concept R18 are a response to a growing need among the motorcycling community,” says Edgar Heinrich, head of BMW Motorrad Design. “Instead of technology, the focus here is on simplification, authenticity and transparency. I observe an almost romantic yearning for real mechanical engineering.”