After being neglected and covered in dust, this little Italian Scrambler gets a new lease on life

Almost 25 years ago while on holiday in the town of Sidney, B.C., Steve Tayler was walking down a street when he noticed an old motorcycle at rest behind a dusty, unwashed window in a small commercial building.

Tayler opened the door and stepped inside what appeared to be a custom paint shop. He spoke to the proprietor about the bike, which turned out to be a 250 cc 1966 Ducati Scrambler that definitely looked the worse for wear. While Tayler wasn’t specifically looking for an old Ducati, the motorcycle was for sale.

“I was aware of what a Ducati single is, thanks to having been a reader of vintage motorcycle magazines,” Tayler explains. “While this one was together, it wasn’t running and it was in really rough condition.

Bought on a Whim 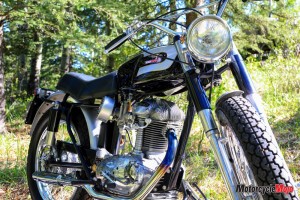 But that didn’t stop Tayler – who lives on a rural property west of Calgary – from buying the Ducati. He bought it on the spot, shipped the bike home and promptly dismantled it. That’s when the research began – and keep in mind these were the days before the Internet. Phone calls and letters led Tayler to a supplier in Seattle, from which he managed to purchase an original parts book.

“I was very impressed by the high-quality diagrams that really allowed me to zero in on what was missing on this Ducati,” Tayler says. “The headlight was wrong [and] it was missing the taillight and the air cleaner and so many other small parts and pieces.”

Tayler is no stranger to motorcycles and restoration projects. That’s thanks to his dad, Ted, who was trained as a mechanic in England before the family immigrated to Canada. Tayler was seven when they arrived in Calgary in the late 1950s, and Ted got a job as a mechanic at Bert & Jack’s Garage, then a well-known service and repair shop that focused on British automobiles.

That Tayler’s first motorcycle was of British manufacture should come as no surprise. He and his dad put an early-1950s BSA Bantam back together, and the small 125 cc two-stroke, single-
cylinder bike was Tayler’s first real ride. A brand-new Honda 90 followed, but Tayler’s attention soon turned to British sports cars – specifically, a 1972 MGB GT.
He’s restored this MGB twice and still owns it and several other British cars that he’s reconditioned from the ground up.

In the early 1990s, when the opportunity to buy a 1968 Triumph Bonneville presented itself, Tayler bought that bike. Then he purchased and restored a 1969 Norton Commando. It was only a short time after completing the Norton restoration that Tayler discovered the languishing Ducati.

The Way the Factory Designed It 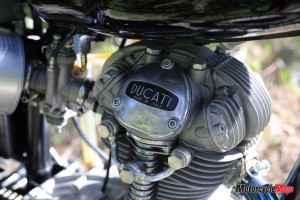 In 1966, the 250 cc four-stroke, single-cylinder Ducati line consisted of the Monza road touring bike, the off-road Scrambler and the Mach 1 competition models. These singles feature a bevel gear-driven overhead camshaft, and compression ratios varied across the 250 cc range: 8:1 in the Monza, 9.2:1 in the Scrambler and 10:1 in the Mach 1. All three models featured a similar single downtube steel chassis, but the competition-oriented Mach 1 offered the cleanest lines, complete with its clip-on bars and racing-style saddle.

As purchased, Tayler says, the only really nice part of his Ducati Scrambler project was an existing orange, metal-flake paint job on the gas tank that obviously wasn’t stock. While he’s something of a purist when it comes to putting something back together as close as possible to the way it left the factory, Tayler isn’t averse to changing a paint colour – but the orange didn’t work for him. He also likes to polish most aluminum pieces until they gleam.

With the Ducati apart, Tayler discovered the frame was bent slightly. So, he delivered the chassis to Greg Miguez at Greg’s Cycle Ltd. to have the tubes straightened. That motorcycle shop is one of Calgary’s longest-lived independents. Miguez began in 1970 by selling CZ, Jawa and Moto Guzzi motorcycles while servicing other brands. Now, he focuses on the off-road market, but continues to offer his repair and welding services to the local motorcycle community. 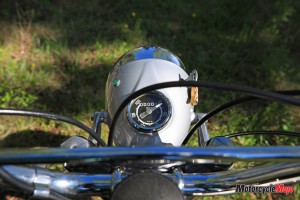 During Tayler’s search for parts, he found Henry Hogben of Ducati Singles Restorations in LaSallette, Ont., who is an expert on Ducati singles.

“I sent a very long list of parts I’d need to Henry,” Tayler says. “Henry was like a walking encyclopedia about the Ducati. He gave me a lot of info and sold me a lot of parts.”

Hogben was something of a legend among Ducati owners, having built and tuned several single-cylinder machines that have won races, including a 250 single that won an American Historic Racing Motorcycle Association championship in the hands of Jay Richardson. Hogben, something of a man of mystery,
lost his right arm earlier in life, but that didn’t stop him from becoming a wizard with a wrench. He also continued to ride and set up a Ducati 450 with its clutch and front brake levers on the left handlebar together with a thumb throttle from a snowmobile. (Hogben died late in September in 2010.)

When Tayler took the wheels of his Ducati apart, he discovered the rear hub was abused to the limit. A replacement came from Hogben, and Tayler set about polishing the front and rear hubs, replaced the bearings and ordered new spokes. The original Ducati rims were tweaked back into shape and rechromed before being laced to the freshly serviced hubs. Dunlop Gold Seal tires were levered onto the rims to complete the rolling…