Memories of a Newbie Spectator (sort of)

Many years after this writer raced on this hallowed track, he decides to watch the action from the other side of the fence

Story and Photos by: Pat Boyd

My buddy Alan Burns asked me in December 2017 about going to the 2018 Canadian Superbike Championships series racing (CSBK) event at Canadian Tire Motorsport Park (CTMP; formerly Mosport) with him. He was trying to entice me to race again, but instead of declining, I told him I’d happily hold the umbrella for him. I was getting pretty excited about riding up to CTMP on my VFR with all my camping gear. I’d be back at the track just like in the good ol’ days, except I wouldn’t be racing. My road-racing days were a lot of fun for me and I have a lot of good memories of racing at Mosport, so I was pretty excited to see the place again. In the end, Alan was too broke to race, but I decided to go anyway.

I also have a threadbare Mosport T-shirt from 2001 that my wife bans me from wearing in public and has been relegated to garage duty. That year was my first of eight consecutive years racing at Mosport. 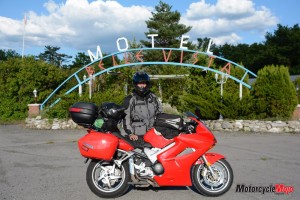 Mosport is a pretty big track with first-class facilities. When I began racing in 1999, I was going only to tracks such as Shannonville (east of Belleville, Ont.) and St-Eustache (near Montreal), where I could “club” race. There wasn’t any club racing at Mosport, but for one week a year, you could race with the Canadian Superbike series on a national level. Two years into my racing career, I went to Mosport and never looked back. It became an annual must-race event for me. It was where I learned that a fast, flowing track didn’t tire me out so quickly and also where I learned the importance of the draft. By tucking in behind a faster racer on the back straight, I could increase my speed 15 km/h to 25 km/h by drafting. Racing at Mosport was also the first time I began wringing the neck of my 1991 Honda CBR 600 F2. I never thought I’d want to go faster than 220 km/h, but at Mosport I couldn’t get enough of the speed. My rookie year at Mosport was my third year of racing that bike and I was growing very comfortable on it. On the back straight, I’d give it all it had and get drafted along at 240 km/h – and wanting more.

I arrive at CTMP’s main entrance around 6:30 p.m. Plenty of time to grab my Advanced Weekend Super Ticket and an Advanced General Camping chit. I saved only $10 by buying these tickets ahead of time, but the purchase represented a commitment to go.

New asphalt greets me at the main entrance. There has been money spent on this facility since I was here last, and that is immediately apparent. In 2011, race car driver Ron Fellows and real estate mogul Carlo Fidani purchased Mosport and shortly after partnered with Canadian Tire. This financial partnership allowed for quite a few expensive improvements, such as resurfacing sections of the track and enlarging the main entry tunnel to allow vehicles as large as tractor-trailers into the infield. Other improvements include paved runoffs in Turn 2A and Turn 8, as well as pavement in the upper and lower paddocks.

I putt away from the main entrance on my VFR with my ticket tucked away to find a campsite where I’d be planting myself for the weekend. By suppertime on Friday, the perimeter of the track is lined, mostly with hard-bodied motorhomes and nine metre-trailers. Tent trailers are rare and tents are even more rare. I find one of the last spots available. It is sloped, but it is on the back straight – just as I had hoped for. I am able to pitch my tent and angle it so I will have a nice view of the motorcycles on track in the morning. 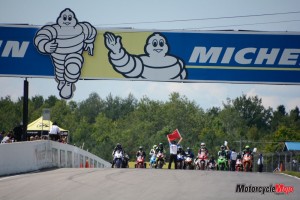 By 9 a.m. on Saturday, the practice sessions have begun, grouped by classes. The session lineup is a rotation of an Amateur class followed by a Pro class all day. The CSBK event at CTMP is a doubleheader weekend, so practices are held in the mornings and final races on both Saturday and Sunday afternoons.

Saturday is a beautiful 28 C sunny summer day, and I know I’m overdoing my sun exposure. The Pro 600 race is a barnburner, with Mitch Card, Tomas Casas, Sebastien Tremblay and Jacob Shaw-O’Leary fighting a four-way battle for the lead. It is nail-biting action right until halfway through the last lap, when O’Leary and Card crash three seconds apart leaving Casas to take the win. It is awesome racing!

After the Pro 600 race, I visit the paddock area, which is fully accessible to all spectators at a CSBK event. From a distance, I see a familiar face relaxing in Mitch Card’s pit area as a crew of three mechanics repaired Card’s bike. I used to race with Bill Card, Mitch’s dad, in the Amateur 600 class and I remember a lot of fun weekends at the track with him. Bill was very good: he almost won the National Amateur championship in 2003 and went on to an impressive Pro career. In 2004, Bill was promoted to the Pro ranks and raced for years in Pro 600 and Pro Superbike, as well as a few seasons in the Thunder class.

I ask Bill if he missed the racing. “No. I don’t think I could be as competitive as I would want to be,” he says. “The fastest I ever went here was a 1:24.7 [lap time] and I was in the lead pack battling Crevier. This morning, my son went out and did a 1:24.1.” Then, Bill laments the fact that he didn’t begin racing until he was 33 years old – Mitch began when half that age. Bill is still lean, and I suspect he would be very competitive today. The bikes and tires are so much better today than they were 15 years ago.

Battling with Steve Crevier? Now, I had to admit that was a better story than my brush with motorcycle fame. I decide not to tell Bill I once held open the St-Eustache washroom door for two-time CSBK champ Michael Taylor. 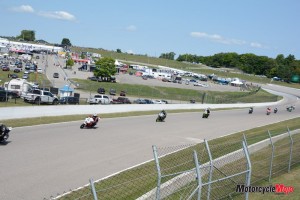 The Pro Superbike race also is a barnburner, with Jordan Szoke, Kenny Riedmann and Ben Young battling it…