A world-class racetrack in the heart of B.C.’s wine country.

Nestled in the centre of Okanagan wine country among spectacular rolling hillsides is a racetrack called Area 27. This stunning world-class members-only facility lies just five minutes east of Oliver, B.C., 30 minutes south of Penticton and roughly 4.5 hours from Vancouver. Visiting it has been on my bucket list for a few years now.

Construction of this unique facility began in February 2016 and the first laps were completed on Aug 30 of that year. Since then, all I’ve been hearing from people in the motorsports industry is: “You’ve gotta ride that track!”

I was finally able to find time last summer to ride it, and I was not disappointed. I loved it so much that since then, I’ve been hoping to get invited back. When a last-minute opportunity came up earlier this year, I jumped at it.

The first time I rode Area 27 was July 2018. I was given a guest pass to ride the track from Craig Fernandes, a friend of mine who has been a member since the facility opened. I borrowed a 2001 R6 from Mike Salary, another friend, and had help in the pits from Marbod Kern. I packed my car with bicycles, snacks, food, bathing suits and my two children – aged 7 and 9 at the time (promising them fun and adventure) – and began the pretty drive.

After winding past some stunning West Coast scenery and through the heart of wine and produce country, we came upon a tiny little sign: Area 27. If you didn’t know that it was a motorsport facility and racetrack, you might assume it was simply the name of one of the dozens of vineyards or wineries along the same route.

We turned up the road and fresh, dark pavement led up and through a barren but beautiful hillside. When we crested the rise, we got our first glimpse of the track. 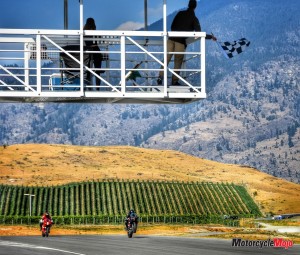 I’m not sure what I was expecting. Everyone had told me that Area 27 was huge and amazing, with a fast-flowing layout. However, after driving up the windy road and by grapevines and windmills, I didn’t expect to come upon such a sprawling, large and professional-looking racetrack seemingly in the middle of nowhere and surrounded by vineyards. I was in awe at the enormity of the facility.

Immediately. I was excited to get out and ride. The kids were excited too: off in the distance in a large parking/paddock area, we could see about a dozen luxury race cars – ones that my nine-year-old son Ashton knew all the names and stats of.

The track is an extremely technical one with some seriously blind corners, fun drops and challenging double-apex corners that require precision riding and driving skills to navigate quickly. The track is 12.2-metres wide, with the longest straightaway being 800 metres. The super-fun carousel turn sports 11 degrees of banking. The grip is fantastic and the layout is smooth and flowing, with decent run-off area, gravel traps, tire walls and signature blue-and-white… 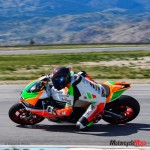