“There’s no law west of Dodge and no God west of the Pecos.” As I crossed the Pecos River just beyond Del Rio, Tex., the land certainly looked like the old western aphorism could be true. A thread of patched tarmac ran across an arid sheep and cattle range where the soil was little better than crumbled limestone. Aside from the scattered creosote bushes and smaller scrub brush, which somehow persisted despite the climate, I had an entire 160 km of highway to myself. More than once I had to swerve – or duck! – for vultures that were reluctant to leave their coveted roadkill breakfast.

As if to bring me back to the 21st century, a white pickup with green lettering stating “U.S. Border Patrol” appeared on the horizon, and traffic (I was the only one on the road) was being funnelled through a checkpoint on Highway 90. The guard, upon learning I was Canadian and after seeing the gear strapped on my Suzuki V-Strom 650, asked if I was heading to Big Bend, then wished me a safe trip. At Sanderson, the self-described Cactus Capital of Texas, a gas station attendant commented on the overcast morning. When I asked about the forecast, she said, “Ten per cent! Anytime they say 10 per cent, I get my hopes up.”

I turned south at Marathon – a lonely gas station and a few houses – to make the final 100 km to Big Bend National Park. Stopping to view a display of large dinosaur fossils, I was surprised to learn that Big Bend shale has preserved some of the most diverse fossil records in North America. Paleontologists have unearthed the remains of Tyrannosaurus Rex, Triceratops and Alamosaurus, one of the last and largest of the dinosaurs at up to 25 metres in length.

From Deserts to Mountains 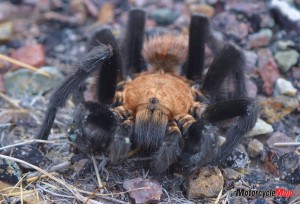 Big Bend, part of the massive Chihuahuan Desert that extends to Arizona and Mexico, receives less than 25 cm of rainfall annually. In summer, midday ground temperatures can reach above 80°C, and both plants and animals have been forced to adapt. I knew that hiding from view were large-eared jackrabbits, kangaroo rats, mule deer and bobcats. I kept my eyes peeled just in case.

Arriving around noon at the visitors’ centre, I asked a warden to recommend areas to explore. When she learned I was on a motorcycle, she advised against canyon exploration – “It’s already 46 C down there” – and suggested I head up to the Chisos Basin. The Chisos Mountains rise to 2,387 metres, more than 2,000 metres above the surrounding desert floor, and temperatures would be 10 C to 15 C cooler there. The basin is like an island for flora and fauna that cannot survive the desert heat, and there are species wholly unique to this basin. I found a campsite and, to escape the heat, which was still 33 C, stretched out on my bivy under a mesquite tree and listened to a mockingbird run through its repertoire of calls.

That evening, I joined several other people to marvel at a spectacular West Texas sunset through “the window,” the only gap in the mountains that surround the basin. Ever-richer golds and deepening blues infused the buttes below. The mercury dropped with the sun and I went digging in my pannier for warmer clothes.

Morning came abruptly at six a.m., when I was awakened by something crawling on my head. I exploded out of my bivy in order to send it scattering, so I never did see what it was. I kept telling myself it was one of those cute little lizards I had seen and not some trigger-happy scorpion. I’m certain the critter was not the tiny bat that swerved and darted around my site as I watched. I am not educated enough to tell if this was one of the specialized long-nosed bats that drink nectar from the park’s cacti, pollinating them in the process.

Mornings in West Texas were mercifully overcast until 10 or 11, when the desert sun burns the clouds away and the heat returned. On this morning, however, the desert welcomed a life-giving shower and almost immediately turned a vivid green. On my way to Rio Grande Village at the southern border of the park (and of the United States), I encountered two small roadrunners picking at roadkill. I pulled up to admire a large brown tarantula crossing the pavement; he was quite accommodating as I took his photo, getting as close as I dared.

Where the road ended at the Rio Grande River, a lone border guard explained that for US$5 locals will shuttle visitors in a rowboat across to Boquillas del Carmen, a tiny Mexican town that relies almost solely on U.S. tourism for its existence. For an extra US$3, you can ride a burrow from the river up into town.

I opted to remain stateside and proceeded to an overlook above the surprisingly diminutive river below. In amazement, I watched a young man wade across the border and back again. It was then that I noticed, at my feet, a collection of small trinkets set out on display alongside a plastic Coke bottle with a few dollar bills inside. On the bottle was a written invitation to buy these souvenirs “handmade in Boquillas.” Most poignant, perhaps, were the change purses with “NO WALL” stitched on them.

Retracing my route past the Chisos Basin, I continued for another 40 km to Terlingua, where the landscape became even drier (if that was possible). Terlingua, a defunct mining town, is now home to an eclectic assemblage of artists and hippies. I visited a well-stocked trading post, complete with a toothless old cowboy strumming his guitar on the porch. I also snapped a photo of “Passing Wind, the only submarine in West Texas,” as well as the Terlingua cemetery, where loved ones still are laid to rest beneath mounds of sand and rock, most with homemade tombstones or markers.

Finally, in the afternoon heat and knowing I needed to be wary of heat exhaustion, I refilled my Camelback and set off on Farm Road 170 toward Presidio. This was a fabulous ride hugging the Rio Grande: a striking corridor of deep green squeezed between barren mountains of rubble and sheer cliffs. Through the towns of Lajitas and Redford, the paved road surface was in excellent condition, twisting and turning, rising and falling rapidly and repeatedly. Indeed, the crests of hills were often so steep, they obscured what lay beyond, and encountering a tight turn at the last moment was common – all of which were a lot of fun but required my complete attention.

A Break From the Heat 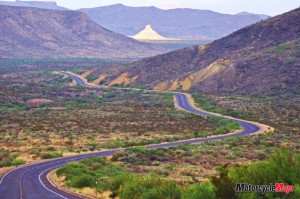 Temperatures were rising quickly under a fierce sun, and soon I felt like I was riding through a blast furnace. I made a point of sipping a lot of water and, counterintuitively, staying covered up. In Presidio, I stopped at an air-conditioned restaurant for a burrito and lots of ice water to bring down my body temperature. By late afternoon, I was ready to set out again.

North of town, the road wound through low hills, and I pulled over to watch a herd of aoudad sheep stampeding across the grasslands. I was even more amazed to see what looked like some type of African antelope grazing near an outbuilding. I later learned it was an oryx, and that indeed both these species had been imported from Africa for hunting. As is often the case, their growing populations have become a nuisance.

At Marfa, I returned to laser-straight Hwy. 90 West – 120 km of flat, dry plain with no services but with dust devils dancing on either side. Thirty kilometres on, I came across a massive white blimp tethered to the ground. This blimp, part of a radar system to combat drug smuggling along the Mexican border, can survey an area of up to 400 km in diameter. At Van Horn, I turned toward El Paso to meet up with Chris, a college friend with whom I had recently reconnected.

Chris, eager to welcome me, deliberately took me to an authentic Tex-Mex restaurant in a sketchy part of town. He assured me, however, that El Paso is one of the safest cities in the United States, which seemed odd, as Juarez, the city just over the border, is a dangerous centre for drug trafficking. The two facts are connected, Chris said, because the drug lords do business in Juarez, but live and raise their families incognito in El Paso. No one wants to run afoul of the cartels, so petty crime is almost non-existent. “An unfortunate reason,” he admitted, “but many of us feel comfortable never locking our doors.” 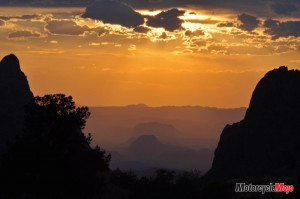 Chris modestly told me of his career in the U.S. military, recounting his time in Iraq, of flying as a paratrooper and troop commander, and having served in both the FBI and the Secret Service. He had special clearance to bring me into Fort Bliss, a 1.12 million-acre training facility with every weapon and vehicle available to the U.S. military. We watched soldiers practising their accuracy using machine guns, and we peered into a gutted training building that looked like something straight out of Call Of Duty.

Chris spoke of the soldiers he was training now as if they were his children: “Above all, when they head overseas, I want to know I did all I could to ensure they will be safe.” As I listened to his stories, I simultaneously felt my naive status as a civilian and my gratitude for the untold sacrifices our soldiers make for my freedom.

“Let’s go four-wheeling!” he said, changing the subject. “My Jeep Rubicon is new, and I love to get out in the desert and throw some dirt around.” So, off we roared into a scrubby desert region far outside the city limits. As dark fell, we crested a sandy knoll, our headlights illuminated a red pickup that was buried to the axles. Pulling alongside, Chris asked the driver if he needed help, switching to Spanish when it was clearly necessary. Turns out a four-wheel drive on the end of a tow strap was all our friend needed and, having thanked us repeatedly, he soon was on his way.

“Everything in this desert either wants to stick you, stab you, sting you or bite you,” Chris shouted as we bounced over the dunes. “It’s a good thing we came along, or he’d have spent a long, lonely night out here.”

The next morning, I said goodbye to the good officer as he headed off to the base and I struck out to the north. Highway 54 led me past tank ranges where dust flew high in the air as desert military vehicles – behemoths, really – thundered about. Again, I felt a surge of gratitude – this time for life, for renewed friendships and the chance to experience Far West Texas – maybe no longer lawless or godforsaken, but still rare and remote; a land of unbending beauty.