Still a Legend after 50 Years

Fifty years ago, Glenn Turple was riding his motorcycle in central Alberta when he stopped in the small town of Killam for lunch at a diner. Sitting on the counter was a black-and-white television set tuned to the news, and Turple learned that the Apollo 11 mission had successfully landed on the moon. For centuries, humans had dreamed of reaching the lunar surface, and Apollo 11’s accomplishment awed the world.

Just one week later, Turple was riding a brand-new 1969 Honda CB750 Four. The two events are forever linked in his mind – and, not to downplay the importance of landing a man on the moon – and to the motorcycle community, the CB750 was no less a groundbreaking achievement.

“The CB750 was an exciting motorcycle that started the four-cylinder revolution,” Turple explains. “Riding that Honda for the first time was an eye-opening experience.”

And Turple should know. His first motorcycle was a non-running 1926 Harley-Davidson bought in partnership with his late brother, Rex. Turple didn’t help get the Harley-Davidson running and have a turn behind the bars, though, as he left the family farm at Olds, Alta., to work an autumn harvest in Ontario.

“Rex got the bike running while I was away, and by the time I came back it was broken again,” Turple laughs. 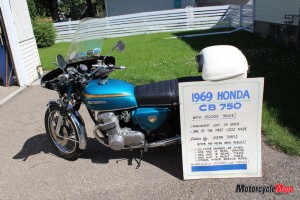 In late summer of 1946, the brothers ordered a new 350 cc Panther by mail from Nicholson Bros. Motorcycles of Saskatoon. By 1947, Turple had sold his share of the Panther to Rex and bought a 1939 600 cc Ariel, a machine Turple rode from Olds to Saskatoon, Moose Jaw and Rouleau, Sask., to visit family. For Turple, motorcycle touring became his most enjoyable activity, and although some of his early machines weren’t fitted with speedometers, he was soon recording his mileage.

In 1949, he bought a brand-new 500 cc Norton ES2 from English Motorcycle Sales in Calgary. He rode that single-cylinder motorcycle for 23,000 miles, including a journey to Los Angeles.

By this time, motorcycles were a passion for the Turple brothers. They set up Olds Motorcycle Sales in a small shed on the family farm. They were a subdealer for Norton through English Motorcycle Sales; for BSA through Fred Deeley Motorcycles in Vancouver; and for Triumph through Nicholson Bros.

The brothers earned money by supplying parts and service and selling new bikes. Glenn Turple bought a 1950 BSA 650 Golden Flash, and the odometer soon read 22,000 miles. He once rode the BSA on a journey to New York, Boston and New Hampshire. 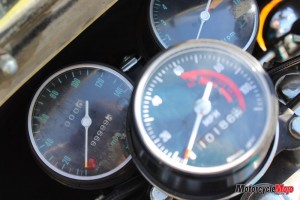 After the harvest in 1956, the brothers moved their business off the farm and into Red Deer, changing the company name to Turple Bros. Motorcycles. Powered two-wheelers might have been a part-time business for the brothers before the move, but once in Red Deer, Alta., they focused their attention full-time on motorcycles, selling new British and German makes as well as many used war-surplus Harley-Davidson 45s.

But, at a dealer meeting in Calgary in the late 1950s, Glenn Turple was introduced to Japanese motorcycles – specifically, to Honda.

“At a downtown Calgary hotel, Trev Deeley showed off the new BSAs, Triumphs and Ariels,” Turple says. “After discussing the British bikes, Deeley said, ‘I’ve got a surprise for you.’ In another room, he showed us some new Hondas: a step-through 50 and a Dream. We all looked at him funny, and there weren’t many takers.”

However, some dealers, including Bob Kane Sr. of Calgary, did take the little Hondas. To everyone’s surprise, the Japanese motorcycles sold quickly.

“That meeting was in the spring of 1959, and we took on the Honda line in August of that year,” Turple says.

Alongside the larger British motorcycles, Turple says, the brothers successfully sold small-bore machines such as the Honda 50 and the Dream in 250 cc and 305 cc sizes, followed by the 250 cc Hawk and the 305 cc Superhawk.

“The British-built 650s were the largest bikes we sold, and people who moved up from a 305 Honda to a 650 Triumph were often disappointed at the maintenance costs of the Triumph compared with the Honda,” Turple says, adding, “and people were also surprised at how the 305 could come close to the 650 for speed.”

Then in 1965, Honda introduced the CB450 with its 43-hp double-overhead cam, twin-cylinder engine. In comparison, a 1966 Triumph Bonneville, with its twin cylinders and twin carburetors, was rated at 47 hp. Turple bought a CB450 in 1966, a motorcycle that he says could outrun and outpull any of the British-built 650s. He toured on the electric-start 450 and put 45,000 miles on the odometer –in fact, that was the bike he rode to Killam when he heard about the moon landing. 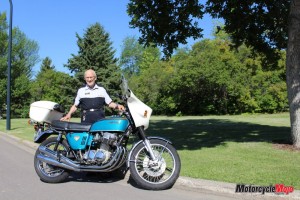 Then, on July 24, 1969, Turple was aboard the brand-new CB750 model K0, Honda’s first mass-produced transverse (across the frame) four-cylinder machine.

There had been other mass-produced four-cylinder motorcycles built in the decades before Honda began producing the CB750, including the Belgian-made inline-four FN and several U.S.-built machines such as the Pierce, Henderson, Militaire, Cleveland, Ace and Indian. Each of these, along with the British-made Vauxhall and Wilkinson, plus the Nimbus from Denmark, had their engines mounted in line with the frame, like the FN did.

Ariel, too, produced a four-cylinder machine, but those four pots were arranged in a square, like two parallel twins mounted fore and aft. Ariel produced the Square Four from 1931 to 1959, and that was the last mass-produced four-cylinder machine until Honda’s CB750 appeared on the scene.

Honda, acquiescing to North American demand in 1967 for a larger, more powerful motorcycle, laid out certain “engineering targets” for the CB750. According to an article about the model on the Global Honda website, these targets included the motorcycle’s ability to remain stable while maintaining speeds between 140 km/h and 160 km/h; a better braking system; less noise and…