KTM is best known for its single-cylinder dirt bikes and for its larger, V-twin-powered road-oriented bikes, including the Adventure models and the Dukes. The firm’s new middleweight adventure bike, the 2019 790 Adventure, breaks new ground for KTM: it’s the Austria-based bike maker’s first-ever off-roader to feature a parallel-twin engine. KTM launched the new 790 Adventure and its off-road sibling, the 790 Adventure R, in Big Bear, Calif., where we sampled both machines in their natural habitats — on winding mountain roads and on rocky, sandy trails.

The 799 cc liquid-cooled twin first appeared on the street-oriented 790 Duke last year. Unlike the parallel twins of other manufacturers, which feature either 180-degree, 270-degree or 360-degree crankpin layouts, the KTM twin features a unique 285-degree crankpin arrangement. This gives the KTM twin a 75-degree firing order, which gives the 790 a familiar KTM sound and feel because that’s the same firing order as the firm’s 75-degree V-twins. KTM claims the engine produces 94 horsepower and 66 ft-lb of torque, which is right on par with the 790’s principal competitors, the Honda Africa Twin and the BMW F850GS. 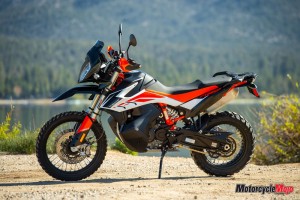 Before we dig further into the machine, we need to refute a rumour. Contrary to some early online reports that claimed KTM’s 790-series bikes were to be built in
China as of 2020, this will not be the case. While KTM did form an alliance with China-based motorcycle manufacturer CFMoto in 2018 and the latter will produce small-displacement singles in China, we received confirmation that all 790 models will be manufactured in Austria.

One of the main reasons that KTM chose the parallel-twin layout for this new middleweight was to achieve a low seat height – at least by adventure bike standards. The 790 Adventure’s two-position seat sits at either 830 or 850 mm from the ground; the taller Adventure R’s perch sits at 880 mm and is not adjustable. While the latter is only 10 mm lower than the 1090 Adventure R’s seat, the 790 also has a narrower midsection, which makes planting both feet on the ground easier.

The earlier comparison to the Africa Twin and the F850GS wasn’t random; like those two machines, both 790 Adventure models utilize 21-inch front wheels, which is the ideal wheel size if you plan on veering off the pavement and riding where few bikes go. Large-diameter wheels roll over rough terrain with more ease than smaller 19-inch wheels found on bikes such as the R1250GS. The 790 also has an 18-inch rear wheel, which facilitates tire selection when choosing aggressively treaded off-road tires. Among the 790’s competitors, only the Honda rolls on an 18-inch rear wheel; all others use 17-inch rears, which narrows knobby tire choices. 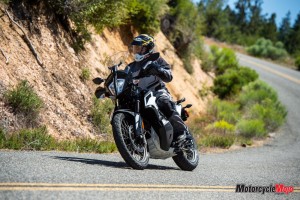 We began our ride on the Adventure R. Among the first things I noticed on startup was how much the 790’s parallel twin sounds like one of KTM’s V-twins – again, due to the cylinders’ firing order.

I didn’t take long after hitting the dirt to realize that the Adventure R is just about the best adventure bike I’ve ridden to date. Yes, that’s a bold statement, but we hit rough gravel roads with the fuel tank filled, and those roads quickly turned to rocky, undulating trails and, eventually, to sandy tracks. The bike is remarkably light at 204 kg, undercutting the fully fuelled BMW and Honda by 25 kilos – and that’s a lot. And that’s with the Adventure R’s larger 20-litre fuel tank filled (versus 15 litres and 18.8 litres, respectively, for the BMW and Honda).

Unlike other adventure bikes, which have a conventional fuel tank atop the engine and feel top-heavy and cumbersome when full, the KTM’s fuel tank is a unique design that slings over the frame and has two bladder-like compartments hanging low to either side of the engine. KTM did this to maintain a low centre of gravity when the bike is filled to capacity, and that design works as claimed. The Adventure R also is narrow between the knees. However, the tank does look as if it could be easily damaged should you take a hard spill. Despite trying to be as thorough as possible when testing motorcycles, I didn’t test the 790 Adventure’s crashworthiness, so I’ll rely on KTM’s claim that the bike survived extensive, severe off-road testing without issue. Replaceable plastic covers protect the tank, and there’s also a large aluminum skid plate to protect the bike’s undercarriage. 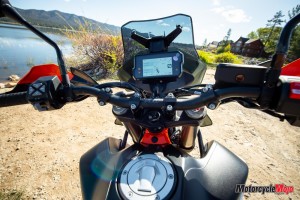 Where the Adventure R really edges out its rivals is in its suspension, which is provided by KTM-owned WP Suspension and is fully adjustable. The R’s tall suspension easily soaked up even the biggest bumps without bottoming during my test ride and allowed a surprisingly quick pace. The controls are very precise, and the bike steers sharply enough to allow time to react to obstacles at an expert-level pace without me busting a sweat.
You usually have to tread with a relatively wide margin of error when riding big adventure bikes, but on the Adventure R you can attack with almost the same vigour you would on a dedicated off-road machine. And that’s on the R’s standard Metzeler Karoo 3 tires, which proved adequate on our ride, although not exceptional. The tires worked great on rocks and hard-packed dirt; not so well on the sandy sections. Spooning on a set of DOT knobbies would probably transform this machine into a twin-cylinder enduro bike.

The foot pegs feature removable rubber inserts, which expose serrated edges for off-road grip when removed. Another off-road touch is a flippable brake-pedal pad that changes height to facilitate stand-up riding. The bike also has a few very handy storage compartments: the Adventure has a watertight smartphone compartment under the passenger seat; both the Adventure and Adventure R feature a storage compartment under each side cover that are large enough to carry a 500-ml bottle of water – very handy during our ride in the desert west of Big Bear.

Ride modes are standard on both models: include rain, street and off-road. The R also has a rally mode as standard ($240 option on the Adventure), which has more aggressive throttle response than off-road mode and maintains selected ABS and traction control settings when the bike is switched off. (Those rider aids default to the “on” position in the other ride modes.) The Adventure R also has eight-level slip control, which adjusts the amount of allowable rear-wheel slip.

When we switched bikes and hit the roads that wind through the mountains surrounding Big Bear, the non-R 790 Adventure proved to be an exceptionally well-handling machine. At an elevated sporting pace that would shame sport bike riders, the non-R model flowed fluidly through high-speed sweepers and charged effortlessly into tight bends. Despite the standard Avon Trailrider tires’ adventure-like appearance, they felt as smooth as – and grip like – good street tires.
The Adventure’s suspension sits a bit lower than on the R and is adjustable only for rear preload. Settings are nonetheless a fair compromise: perhaps a bit too soft for hard charging on pavement and a bit too firm for serious off-pavement excursions – but good enough to handle both situations adequately for most riders. Only the front-end dove considerably under hard braking, but it did so smoothly without upsetting the chassis, and the bike responded very well to deep trail braking, which isn’t usually a characteristic shared with other adventure bikes.

The bike remains vibration-free up to and beyond highway speeds, and the gearbox is light and precise. Our test bikes were equipped with an optional quick-shifter, which is a $430 option I’d do without. It increased shifting effort and didn’t operate as smoothly as some other systems I’ve tried.

One feature that could be improved on is the ride-mode selection process. While selecting from among the ride modes is relatively easy, ABS has to be set to off-road mode separately (this disables rear-wheel ABS). Unless the bike has rally mode, the ABS defaults to “on” every time the ignition is switched off, so you to have to switch the mode back to off-road mode every time you fire up the bike. To avoid this, the ABS setting should be automatically selected within the ride modes, as on other adventure bikes.

The 2019 KTM 790 Adventure and Adventure R have been greatly anticipated, and neither disappoints, although one is better than the other. Handling is very forgiving, but especially so when riding off-road on the R. With that new middleweight adventure bike, KTM seems to have hit the sweet spot between smaller dual-sport machines and bigger adventure bikes – the KTM bikes have excellent power with smooth delivery for long-distance street rides. The bikes also are excellent off-road machines that will easily handle all but the roughest trails – and will even take those on if the pace is slower. The KTMs boast relatively low prices too: the Adventure starts at $13,499, while the R starts at $14,599. The higher-spec R even comes in below the BMW F850GS’s $14,800 and the Honda Africa Twin’s $15,199.

Even if you’re short of inseam and extreme off-roading isn’t a priority, you should nonetheless choose the 790 Adventure R over its road-oriented sibling. The R is better equipped than the Adventure for not much more money; it gives up very little in terms of street worthiness; and it has all the qualities of a proper off-road motorcycle ready to take on real adventures.