Harley-Davidson has announced it’s four finalists of the Battle of the Kings custom build competition, and one of them is a Sport Glide named “Moonshine” from Calgary. 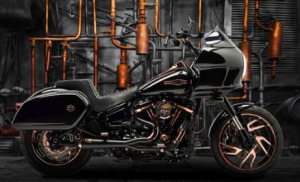 The Battle of the Kings showcases the very best in customization capability and the creativity of the Custom Kings who can be found at every Harley-Davidson dealership globally. In 2018 the Custom King crown was taken by debut-entrants Harley-Davidson Bangkok with their Street Bob-based build “The Prince.” 2019’s Battle of the Kings has brought fierce competition with 26 countries competing for the crown. Now, from 258 entries to four finalists from Canada, United Kingdom, Mexico and Germany.

Canadian finalist Justin Willimont from Calgary Harley-Davidson headed the Sport Glide build from the dealership’s custom division, when asked where he pulled inspiration for Moonshine he replied. ” The inspiration for Moonshine came from the 1983-1992 FXRT Sport Glide. Its vintage club style touring is built for today’s riders and we wanted to bring it back. In order to make the bike “pop”, our design team felt it was best to use copper in place of chrome against the Harley-Davidson Vivid Black to be more visually appealing to our audience. The design was a group effort among our whole service team.

Any model in the Harley-Davidson range may be selected as a base for the build (excluding Trike and CVO models) meaning dealers have more choice than ever before in order to create a title challenger. To further inspire the competition dealers must choose from three style categories – Dirt, Chop and Race – for their build. The rules for the build are simple – 50% of the parts used must be genuine Harley-Davidson accessories and the customization budget is a maximum of 50% of the donor bike retail price.

Along with the Canadian Sport Glide there is a Street Bob from United Kingdom, a Softail Slim from Mexico and a FXDR114 from Germany. The winner will be announced this November, you can check out all of the bike build specs at the Battle of the Kings website. 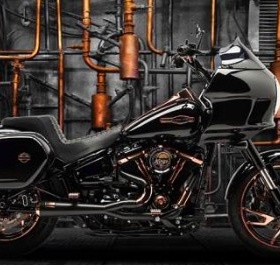 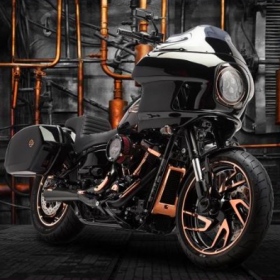 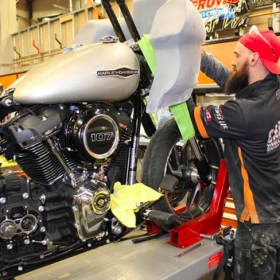 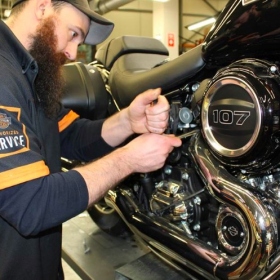