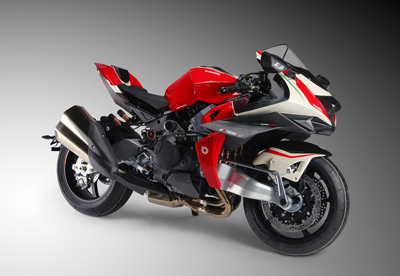 Kawasaki has announced that they’ve purchased shares in Bimota, a luxury Italian brand most well-known for its hub-steering motorcycle design.

Kawasaki motors Europe and Kawasaki Heavy Industries announced a new venture reviving the Bimota Italian motorcycle brand. Kawasaki established Italian Motorcycle Investment S.P.A. (IMI) on April 16, 2019 to purchase 49.9% share of Bimota with 50.1% being retained by its current owners. The goal, to manufacture and sell motorcycles under the BIMOTA brand in Rimini, Italy. Bimota has been known as a premium brand since the release of the first model in 1972, Bimota S.A. will now be renamed as Bimota S.P.A.

Hiroshi Ito, Kawasaki Heavy Industries’ general manager, spoke at EICMA, explaining that a prospective deal has been in the works for three years. Marco Chiancianesi, president of Bimota said Bimota received several offers but Kawasaki ultimately stood out. Marco Chiancianesi and Daniele Longoni gained control of the brand in 2013, but in 2017, the small factory in Rimini was closed and remaining models shipped to Switzerland where the last of the Tesi 3 models were assembled.

“As you know, I am a motorcycle enthusiast, and I love this Italian-born brand. In fact, I love it too much to have bought the company itself,” said Chiancianesi. “But riding a motorcycle, and running a motorcycle business is different. As you are aware, Bimota has been facing some difficulty. We received many offers, but I thought that Kawasaki’ was the best. Through the communications with Mr. Ito, (Kawasaki Motors Europe Manager Masanori) Kinuhata and other Kawasaki staff, I understand we may share the same passion, emotion and values.”

Kawasaki is excited to take on the new investment, showcasing collaboration models at the EICMA show this year. The new Tesi H2, formed from the Bimota Tesi technology and the high-performance H2. Engineer Pierluigi Marconi designed a new Bimota Tesi model with the Kawasaki H2 supercharged inline-Four engine. The Tesi H2 uses bodywork and a chassis designed by Bimota, including the front swingarm and hub-steering system. Marconi says the Tesi H2 offers electronic suspension, traction control ABS and other electronic systems, likely inherited from the H2.

Ito stressed that Bimota will remain an Italian company, based in Rimini and employing Italian designers and craftsmen. In the past, Bimota licensed engines from different manufacturers, but moving forward, all Bimotas will be powered by Kawasaki engines. Paired with members like Pierluigi Marconi, the father of Tesi, IMI will revive the Bimota brand and expand its operations, developing, producing and selling Bimota motorcycles for its fans around the globe. Through the supply of engines and other key components, Kawasaki Motors Europe N.V. , will support Bimota’s revival for 2020.