To ride the length of the Americas overland in one go, you must first leave the Arctic in winter in order to machete your way through one of the most dangerous places on earth. There’s a reason no one has done it before.

Imagine a fun off-road day with your friends the day after a heavy rainstorm – except you’re in one of the most dangerous places on earth and the day is nobody’s idea of fun. Throw in eight days of 42°C heat, constant tropical downpours, the world’s most venomous snakes, poisonous spiders and swarms of diseased mosquitos. Then mix in drug smugglers, human traffickers and anti-government bandits, knee-deep muck, swamps and trench foot. That’s the Darien Gap. Not the best place to ride a motorcycle.

“But we had to,” says team leader Wayne Mitchell. “Our aim was to be the first to ride the length of the Americas overland in one go, from Prudhoe Bay, Alaska, to Ushuaia, Argentina – and that meant getting our bikes through the Gap.”

Off to a Chilly Start 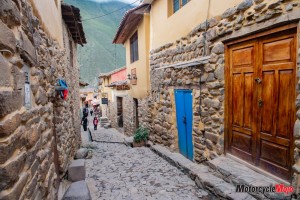 Sane Pan-American riders avoid the Darien Gap at all costs by shipping their bikes from Panama City to where the road picks up again in Turbo, Colombia. There are, however, a small handful of nutters who have rode vehicles through the Gap before. But to ride through the Americas from top to bottom, including the Darien, in one fell swoop means starting from the northernmost point of Alaska in the depths of winter and riding 8,000 km through ridiculously cold temperatures, just to make it to the world’s most dangerous jungle in time for the dry season (which might explain why the record was up for grabs).

Remembering the start of the ride in Alaska, Mitchell recalls: “It was brutal. The wind propelled ice and snow onto little gaps of exposed skin. The initial stinging sensations disappeared as cells started to die. The skin turned whitish and waxy because its surface was freezing, and frostbite kicked in. We were left aching, stiff and numb in Week 1.”

But the freezing ride was long behind them as they sat in the Senafront Battalion commander’s office in Yaviza – the end of the road in Panama.

“Fourteen years of planning and we didn’t know if we were going to be allowed through. Getting permission from the governments, Guna villagers and Darien National Park took a year and a half. But Senafront [Panama’s elite border patrol rangers] recently had a shootout on the border with drug smugglers and didn’t want to let us go,” says Mitchell.

After tense negotiations, the commander finally agreed they could enter on condition that a patrol of 20 armed rangers would go ahead of them to the Colombian border. From there, they were on their own.

The team was now five days behind schedule. With no time to waste, they loaded their bikes into dugout canoes and set off on a two-day boat ride to Paya, the last village before starting on the jungle path. As the boats docked, the armed guards disappeared into the trees to begin their patrol toward the border and the team finally began their ride into the Gap.

“One mile into the jungle on the first day, one of the Kawasaki KLR’s clutches burned out. The sidecars we used for the Alaska stretch put a lot of wear on [the clutches] and we didn’t pack spares. We didn’t anticipate that they’d take such a beating here,” explains Mitchell. It took the team 12 hours to cover two miles that day and

Doering decided he didn’t want to push his lifeless bike the rest of the way and slow the team down. That KLR was abandoned and Doering turned around and walked back to Paya. It was about to get a lot worse for the remaining team members.

From Bad to Worse 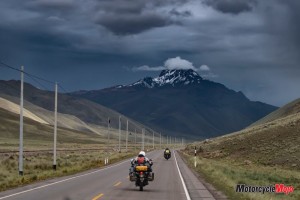 “We planned on riding over dry ground, but being five days late into the jungle made a world of difference. [The weather] was unseasonably wet and constantly raining hard. The ground was a swamp of muck, mud and thick tree roots,” says Mitchell.

The Guna people inhabit the area. They travel back and forth through a maze of tight footpaths and in canoes used for transporting plantains. The team hired a group of 15 Guna and a local guide to help navigate, carry supplies, heave the bikes along and cut through the dense jungle.

“It’s so lucky we had them with us,” says Mitchell. “They’re physically fit and used to working hard in those conditions. But we were physically exhausted. We constantly cleared trails with machetes and chainsaws, just wide enough to squeeze our handlebars through. We crashed almost instantly when we tried riding. Vines caught and snatched at our handlebars, huge tree roots sent us flying and front tires continuously washed out in knee-deep mud. And it wasn’t normal mud either. It was seriously sticky, creating a gluey paste of leaves, twigs and vines around the rear wheel. Even if we could ride more than 100 metres in one go, we’d have to stop and use knives to cut the muddy paste out of the chain, sprockets and rear wheel. It was physically and mentally exhausting, and we were constantly filthy, wet and covered in brown muck,” says Mitchell.

The crew worked 12 hours a day in 40°C and 100% humidity in between storms. And then had to set up camp by cutting more trees and clearing out three-inch-long black palm spikes that pepper the forest. Then it’s a quick dash into netted hammocks before mosquitos could feast on their skin or botflies could lay eggs beneath it. The crew got a few hours of sleep with burning muscles and soggy clothes as deadly fer-de-lance snakes slithered beneath them and poisonous spiders crawled over the nets. 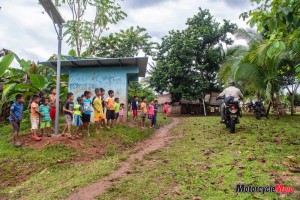 Two days in and the clutches on the remaining three bikes are burned out too. “We had no choice but to throw ropes over the motorbikes and drag them through the jungle for the next six days. Streams were always a sharp three-metre drop in and a steep four-metre bank going back up the other side. Heaving three 200 kg machines up and down all day left our bodies in pain. Instead, in the end, we pushed the bikes into the rivers, then dragged them through the waist-high water. When the ravines were too big, we set up pulleys and cables to zipline our bikes across. When the banks were too steep, we used a block-and-tackle to heave the bikes up. It was slow, agonizing work, leaving us with raw trench foot,” says Mitchell.

“We found the Senafront patrol waiting for us in a clearing by a small cement pillar marking the Colombian border. They shook our hands, wished us luck and disappeared back into the jungle. We crossed the border and made our way to the village of Cristales, where the locals were a little uneasy. Turns out there were 80 armed paramilitary soldiers camped close by. The villagers had to ask the soldiers for permission for us to stay the night. Luckily, permission was granted, but we were warned not to fly our drone and to be gone first thing in the morning.

“A European backpacker was executed near Cristales a few years back; he was found with a bullet hole in his head. Foreigners have been kidnapped here and there has been decapitations too. So, we were back in our canoes and out nice and early.”

The team still had to negotiate the Atrato Swamp. In places, the water was only 10 cm deep, forcing them to get out of their canoes and drag the bikes and boats through even more muck. When they finally reached the Colombian military checkpoint, they weren’t met with a hearty welcome. “Baffled soldiers had a hard time believing we had brought our bikes through the Gap. We ended up with a letter of reprimand from the officials in Turbo for ‘illegally’ crossing into Colombia,” Mitchell recalls.

“We’d dreamed of riding off into the sunset,” Mitchell adds, “but instead had three broken bikes, another one somewhere in the jungle, trench foot, exhaustion and a few angry officials. [While in the Gap,] we probably rode only five miles in total and spent 22 miles pulling by hand and leaving the remaining 75 miles to canoes and swampland. The biggest challenge was pushing all day without knowing how much farther we had to go, with each mile taking an eternity. Physically, we were done. But it was a tremendous sense of mental relief having made it through the Gap. Now all we had to do was get from Colombia to Argentina – we only had five months off work after all.”

To find out more about the teams epic trip and to watch snippets of the trip, visit the team’s Youtube channel: wheretheroadends. The team hopes to produce a travel film as well.