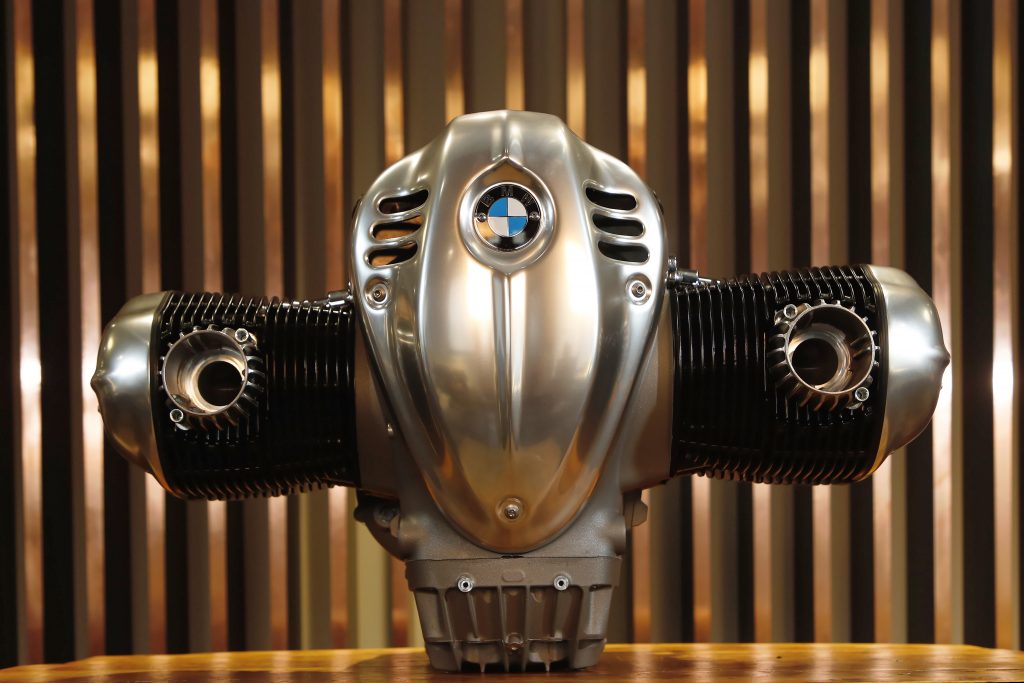 More than any other present-day BMW motorcycle before it, the Concept R 18 translated the essence of famous Motorrad classics into the modern era. The heart of the R 18 is a completely new 2-cylinder Boxer engine, the highest capacity 2-cylinder Boxer of all time; the “Big Boxer”.

Most BMW fanatics have spent the last few months gawking over the first glimpse we’ve had of the R 18, raw, classic and without mistake captivating. It’s not full of tech, or futuristic really in any sort of sense; it’s filled with emotion and plays on the basic instincts of our deepest motorcycle fantasies. The new “Big Boxer” ties in with the traditional boxer engines that were synonymous with motorcycles from Munich and Berlin-Spandau for around 70 years, from the beginning of BMW Motorrad production in 1923 through to the appearance of the air/oil-cooled successor.

The “Big Boxer” has structural similarities that focus on the very first BMW Boxer, with the OHV valve drive and separate engine and transmission housing. The engine output is 90 hp at 4,750 rpm. The maximum torque of 117 ft-lb is already available at 3,000 rpm. This ensures enormous pulling power and – in conjunction with a generously sized flywheel mass is said to create an exceptionally smooth ride. The maximum engine speed is 5,750 rpm.

The “Big Boxer” is air/oil-cooled, has large ribbed cylinders and cylinder heads, weighing 110.8 kg including gearbox and intake system. The “Big Boxer” crankshaft and two connecting rods are forged from quenched and tempered steel. With the crankshaft having an additional main bearing at the centre, which was needed due to the enormous cylinder volume to prevent bending vibrations of the crankshaft.

The wet-sump lubrication system consists of a two-stage oil pump through a sleeve-type chain driven by the crankshaft. The Classic OHV valve drive with two camshafts is combined with modern 4-valve technology and dual ignition. Although the “Big Boxer” has four valves, dual ignition, a modern combustion chamber architecture, intake manifold injection and the BMS-O engine management system, it uses the classic OHV configuration for its valve drive, respecting the practice from over 70 years ago.

It is apparent that when BMW created this engine they were inspired by their previous boxer designs, especially by the valve drive from the R 5/R 51 in production from 1936-1941, and the R51/2 from 1950-1951 and the first BMW Boxer after the Second World War. Keeping with its inspiration, the “Big Boxer” is a “twin camshaft boxer”, the two camshafts are positioned left and right above the camshaft, allowing for shorter pushrods, reducing moving masses, and minimizing deflections and lower linear expansions. The outcome, being a stiffer valve train with improved precision and higher speed stability.

In contrast to today’s widespread engine technology, valve clearance compensation is not affected through hydraulic elements, but, again taking from previous generations can be adjusted via one adjusting screw with one lock nut for each valve. As was formerly the case in the classic 2-valve boxers, valve clearance adjustment in the R18 “Big Boxer” is also achieved very quickly.

As in most BMW Motorrad boxer engines for decades, a single-disc dry clutch transmits the torque generated by the engine to the transmission. For the first time, it is designed as a self-reinforcing anti-hopping clutch, thereby eliminating unwanted stamping of the rear wheel caused by engine drag torque in the event of hard downshifting.

The constant-mesh 6-speed transmission is located in a dual-section aluminum housing behind the clutch and is designed as a 4-shaft transmission with helical gear pairs. An output shaft is provided to bridge the distance and reverse the direction of rotation. The reverse is an optional extra and is driven by an intermediate gear by an electric motor.