Discovering Nova Scotia’s western shore on the Bay of Fundy

Story and Photos by Ron Keys

Smooth as silk, the Fundy Rose ferry’s captain slides the ship into dock next to the Digby fishing fleet. This picturesque harbour town, originally called Conway, was renamed Digby in 1787 after Col. Robert Digby, who provided a home for the Loyalists escaping persecution in the U.S.

Gingerly, my wife Tina and I exited the auto deck and glided along the shoreline of the Annapolis Basin on our BMW R1200GS to a well-hidden break in the pines. As we rode up a meandering driveway, the scent of pine gum enveloped us as the Digby Pines Golf Resort and Spa, one of Canada’s grand old Canadian Pacific hotels, came into view. We covered the bike and got everything ready for tomorrow morning, then we enjoyed a sumptuous meal in the elegant old dining hall. The view across the manicured lawns, with the Annapolis Basin as a backdrop, is stunning and it took us back to an earlier time.

Waking up refreshed, we stepped out into the early morning sunshine under a cloudless blue sky. We mounted up and found the Evangeline Trail, a.k.a. Nova Scotia Route 1. As the GS thrummed along toward Yarmouth, we noticed that the unusually wet spring had birthed a brighter palette of greens than usual, punctuated by beds of lupins, daisies and buttercups and thickets of aromatic wild roses. Occasionally, through the evergreens, we would catch a glimpse of the azure briny water of Saint Mary’s Bay.

Guardians of the Light

After a white-and-red lighthouse grabbed my attention. I dodged gravel potholes on the way to the Gilbert’s Cove Lighthouse, which was completed in 1904. Her beacon of light guided passing lumber ships for decades; the Melanson family were the keepers of light here for two generations. The beacon was extinguished in 1984 and today the lighthouse is under the care of the Gilbert Cove and District Historical Society.

After crossing the Sissiboo River, I spotted a paved road and turned right. Riverside Road hugs the shoreline and wild roses line the road. On two wheels, the smells of spring and summer are there for the taking, so I breathed deeply. Cresting a knoll, a fawn stood in the road, looking at us wide-eyed, then trotted off into the bushes. Rounding a bend, we found ourselves back at the Evangeline Trail again without skipping a beat.

Ahead, harshly piercing the skyline, the twin towers of St. Bernard Church presented a stark change in scenery. Construction began in 1910 and took 32 years to complete. Eight thousand granite blocks were transported 195 km from Shelburne by ox teams. The stones were then cut and laid by hand, one row per year, so the church could be completed debt-free. 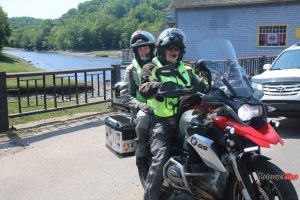 The Acadian culture in the Clare region is in evidence everywhere, with the Acadian flag often seen flying next to the Maple Leaf. Fish-processing plants, piers and tiny colourful fishing boats dot the shoreline as we rolled along. Acadian culture includes its unique cuisine – in particular, a dish exclusive to the Clare region called Rappie Pie. It’s not much to look at, but it certainly excites the taste buds of Acadians and others alike. Rappie is derived from patates râpées (grated potatoes), the main ingredient, which is mixed with boiled chicken, broth, chopped onions and loads of salt and pepper. Duck, goose, pork or even quahog clams are used in variations of rappie, all of which are acceptable. But using ketchup is a great sin.

Just down the road, we took another side route. Cape St. Mary’s Road winds along an expansive beach where clam diggers can be seen searching for the slimy, shelled treasures. At the dead end lies quiet, pristine Cape St. Marys, another tiny fishing community.

Back on Evangeline Trail, we arrived at Yarmouth Bar Road and followed the cape to Yarmouth Bar. The narrow road zigzags through a labyrinth of rocky outcrops, lined with fragrant roses, and we took a break at the Fishermen’s Monument. This pause gave us time to reflect on the hundreds of lives lost at sea. To this day, fishing remains one of the most dangerous professions in the world.

At the end of this road, Cape Forchu’s “apple core” lighthouse (the first of its kind in the world) soars 38 metres upward. The original lighthouse, built in 1839, was demolished in 1961 and replaced with this tower; it’s called an apple core because of its shape. From there, surrounded by acres of rocky hills, we could see The CAT ferry moored in Yarmouth Harbour. We had originally planned to cross the Bay of Fundy on The CAT, but like all cats, she had her own agenda and was not operating yet.

We returned to riding along at speed on Highway 101. After sticking to its posted 90 km/h speed limit, we had our end-of-day meal at the Fundy Restaurant on the Digby boardwalk. There, we enjoyed the freshest of maritime delights and a magnificent view of the harbour. Later, strolling along the promenade, we enjoyed the music and storytelling of Al Dupuis, a one-man band. Between songs he rambled on and revealed his birthplace – Picton, Ont., in Prince Edward County – coincidentally the home of the very magazine you’re reading. Al, a treasure trove of local history, told us about the original Loyalist graveyard just up the hill from where we were standing. And not far from that, overlooking Digby, is another graveyard that accommodated people of colour. Many black people who supported the English king also came to Nova Scotia as Loyalists.

Digby is also home to the annual Wharf Rat Rally. Established in 2005, it spans five days each Labour Day weekend and attracts more than 10,000 bike riders and 30,000 people every year. Stunt riders, custom motorcycle builders, entertainers and motorcycle personalities perform and strut their stuff. The locals and merchants support the event, along with an army of volunteers.

The next morning, we took a ride through the wilderness down Digby Neck to the Tiverton Ferry, the first of two ferry crossings that took us to Brier Island and the home to Joshua Slocum. Slocum purchased The Spray, an old oyster sloop, from a retired sea captain as it lay derelict in a field. After a year and a half of work and $500 to make the boat seaworthy, Slocum set sail on July 3, 1895, from near Halifax to begin marking his place in maritime history as the first man to sail solo around the world. With only a tin clock and dead reckoning for guidance, the journey took him slightly more than three years. (Incidentally, Slocum could not swim a stroke.) His story is enshrined forever in his world-famous, bestseller Sailing Alone Around the World. Eleven years later, Slocum set sail for Venezuela from his home on Martha’s Vineyard. He disappeared at sea and his body was never found – perhaps a fitting end for a mysterious man. 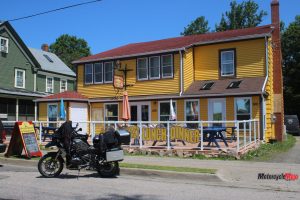 Because of the time involved in ferry crossings, we backtracked to Bear River, an artsy community built on stilts above the red tidal muck of the river bottom. Winding uphill on Purdy Road, we arrived back at the Evangeline Trail and Annapolis Royal to see the power plant that uses the tide to generate electricity. After a stop at the German Sachsen Café for a bowl of Heidi’s goulash (delicious!), we wandered along to Lawrencetown. Each town along the route is graced with colourful frame homes adorned with intricate gingerbread and fretwork that would cost a fortune today.

We wanted to see as many remote fishing villages on the western shore as possible. However, there’s no shoreline road, so we had to ride back and forth over North Mountain to see each village. While the ride over the mountain is always pretty, it is time-consuming. We chose to see Margaretsville, Port George and Hampton before riding on to Wolfville and our accommodations at the Old Orchard Inn.

The Grand Pré (literally, “large meadow”) UNESCO site is a must-see. This is the setting for the Acadian expulsion – Le Grand Dérangement – and Longfellow’s story about Evangeline and her expelled lost love, Gabriel. Acadians who refused to swear loyalty to the King of England were documented using church and census records. The British rounded up these people; their homes, farms and belongings were burned and they were shipped back to France or they fled to points south.

Holding Back the Sea

The Grand Pré Road, which cuts through 3,013 acres of prime farmland reclaimed from the sea by the early Acadians, led us to East Long Island Road and out to the dyke. Building this structure using the tools of the day was remarkable. The reward for all the effort was reclaiming some of the best agricultural soil in North America to this day. Just outside Grand Pré, we parked the bike at the Just Us Coffee Roastery, an artsy coffee pub and internet café, for an excellent brew before heading back to Wolfville.

Wolfville’s Main Street is lined with B&Bs, gorgeous old homes and plenty of shopper’s delights, restaurants and the Church Brewing Co., the last of which occupies a former United Church. Downtown, right on the Evangeline Trail, stands beautiful Acadia University, which was established in 1838. 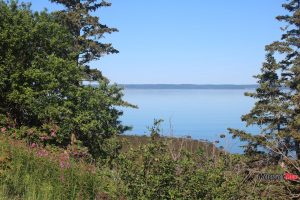 Just outside Wolfville, N.S. No. 358 takes us across the Cornwallis River. Then we rode along a couple of sideroads to the Fox Hill Cheese House, a savoury destination located in the most beautiful scenery of the Annapolis Valley. Getting back on NS 358, we began winding up North Mountain to the Lookoff. We joined the parked cars and motorcycles to see what the fuss was all about. And this vantage point is quite fuss-worthy indeed: standing 182 metres above the sea, we had a view like no other of the breathtaking Minas Basin and the Annapolis Valley.

We made our way out to where the road meets the sea again at Baxters Harbour, looking for the elusive Baxters Falls—which, unfortunately, we never found before we had to make our way to our last destination of the day. Over the mountain we went again, this time to Halls Harbour and the Lobster Pound and Restaurant, where the seafood is the freshest you’ll ever sink your teeth into. We spent several hours here, watching the boats in the dry fishing port slowly rise on the incoming tide.

After dinner, we took one last sunset trip over the mountain and down into the valley to our hotel. The next day, we were homeward bound on the Glooscap Trail over to Truro, where we stopped in for lunch with Bear Davis, my old motocross friend, and his wife, Pam. Then, once again, it was all over.

Life’s precious moments are so fleeting, but our memories linger on in perpetuity. The unique roads, scenery, people and food make this part of Nova Scotia a phenomenal experience for motorcyclists – memorable, indeed. There are plenty of curves and unforgettable scenes, the friendliest of people and the most delicious Nova Scotian and Acadian fare. If you have the opportunity to experience the beauty and charm of this region, take it. It’s a trip that will live on in your memory.