Is the Ryker Rally Truly Adventurous

Could this three-wheeler be an alternative to two-wheeled, off-road camping?

I should have used my head. But in true Knucklehead fashion, I jumped right in without a thought to what a normal, sensible person would do. And now I was trying to hang on at 100 km/h while 18-wheelers swarmed me mercilessly and I couldn’t get this freaking thing to stay in a straight line. I felt like I was sitting on top of a go-cart with no wind protection and which was trying to throw me off its back. The ride was absolute chaos. I was terrified. And I had 45 minutes to go.
It seemed like a good idea when I first thought of it. Which is how I usually get into trouble. When I first saw the new Ryker from Can-Am, I thought it looked cool, sort of like a modern version of the old Morgan three-wheelers, but with no doors to hold you in. Or seatbelts. And the price was much better than the Spyder; the Ryker starts at $10,699. But then when I saw the Rally version, marketed as an Adventure-style three-wheeler at $14,499, I thought, “How many people would love to go off-roading or camping on a bike, but lack the training, skills or confidence to do so?” 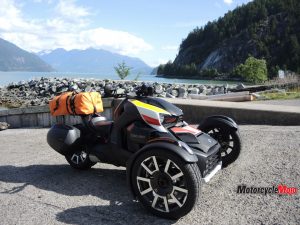 Time and again, manufacturers told me that 80% or 90% of their so-called “adventure bikes” never go off-pavement for those very reasons. The Ryker Rally three-wheeler takes care of all those problems. It’s not going to tip over and pin you to the ground so that you can be eaten by dingos. You’re not going to be overcome by its weight and keel over with a heart attack. Your feet will touch the ground, even though they don’t need to. With the CVT transmission, you don’t have to shift gears while standing on the pegs in sand or gravel, as you would have to on other off-road bikes, to lower the centre of gravity. The Ryker Rally cares not a jot for gravity. It can’t fall over. For all these reasons, I contacted Can-Am HQ in Quebec and proposed taking a Rally version to do some wild camping in British Columbia to see whether the trike really could live up to the Adventure designation. They agreed.

There are courses designed to teach people how to handle these machines because they are so different from motorcycles. Reverse trikes don’t lean in corners, for example. I was to discover that this attribute would lead to one of the greatest core workouts of my life. Because when you go around a sweeper at 80 km/h, rather than leaning into the turn, the Ryker tries to throw you off into the weeds. I should have taken the course. Or driven the trike around the parking lot for 10 minutes. But two minutes after getting the key, I was on the highway, as noted in my opening paragraph. 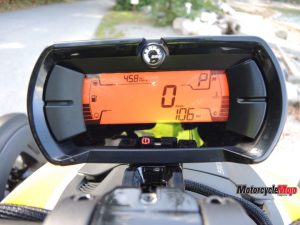 My ride shouldn’t be terrifying, so time to take stock. No wind protection means that the wind is tugging at my arms, messing with straight-line stability. So relax and allow for that. But something else is going on. Whenever a bike inexplicably doesn’t feel right, I think, “tire pressure and suspension setup.”

As soon as I got home (I did survive, against all odds), I broke out the manual that is housed in the handy glovebox in front of the fore/aft-adjustable handlebar (itself quite handy: just flip up a lever and slide the handlebar back and forth). I discovered that the suspension was set up for a payload of more than 200 kg and none of the tire pressures were right. With these matters resolved, the trike settled down considerably on the highway. Also of note, I had the fore/aft-adjustable pegs (again, just flip them up and adjust them forward or back) all the way forward for legroom. The better play is to bring pegs into a middle ground between forward and mid-mounts. This gives your knees more bend and creates a more natural position for them to grab the tank, which you need to do in every corner. 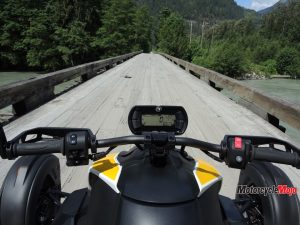 Time to go camping. There is only one decent-sized pannier and a small luggage rack behind the seat. That’s all you get, I was told. Clothing went into the pannier and all my camping gear went into a large drybag, but I couldn’t attach it across the rack; it had to go lengthwise because the only way I could see to attach the bag was to wrap my ROK straps around the bag and rack, like tying a mattress to the roof of a car. But the bag was twice the length of the rack, so half the bag was unsupported. So I strapped it down as best I could and hit the road.
This was my second day with the Ryker, and I was getting used to…