My trip was almost cancelled before it began. Patches of snow were scattered along the Trans-Canada Highway (TCH) around Banff the night before I was scheduled to leave. Intently watching the forecast by the hour, I decided to brave the wet and miserably cold weather and head west out of Calgary, hoping the weather would clear up along the way. The icy rain and crosswinds finally stopped by the time I passed Canmore, and the skies were bright and sunny upon my arrival in Golden, B.C. I kept thanking the weather gods along the way, as I had been planning a trip to Vancouver Island for many years; it was now or never, with no chance of changing my plans. I set up camp for the night and ventured into Golden for a meal at the Island Restaurant, a rewarding spot alongside the Kicking Horse River.

The following morning, I passed through Glacier National Park – and it was all gear on, as the chilly weather and rain made for a cool ride through Rogers Pass. Out of nowhere, a female grizzly appeared at the side of the road and took her time crossing the highway, eventually hopping a jersey barrier and heading back into the woods. A nearby conservation officer mentioned that she was a local who “likes being near people.”

The sun eventually came out, just in time for a stop at the Mt. Begbie Brewery in Revelstoke to pick up some supplies. The sun was shining for the rest of the day, so I did my “happy dance” while riding and apologized to the local wildlife for my off-key singing along with my stereo as I motored toward the town of Hope in B.C.’s Fraser Valley for the night.

The trip would not be complete without a stop at the Dreamcycle Motorcycle Museum in Sorrento. I chatted with Mark, the owner, about the great history of his collection and marvelled at the impressive display of bikes on hand. Well worth the visit, indeed. 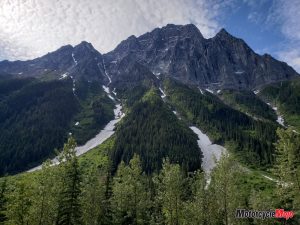 Riding along the Coquihalla Highway always brings a smile to my face because of the fantastic scenery. Some people don’t care to travel on the TCH, but I find it very exciting with plenty to see – between Calgary and Vancouver, at least.

Should you go, take your time and enjoy the scenery as you get to the bottom of the Coquihalla, as there are plenty of RCMP waiting for you when the speed limit changes from 120 km/h to 100 km/h.

I set up camp for the night in an incredible spot between two massive trees and not too many neighbours around. Before the sun went down, I made my way to the Othello Tunnels just east of Hope. What was once a railway line is now an easy walking path through an interesting series of tunnels carved out of the mountainsides, a path that follows the old railway route of the early 1900s.

A quick hop the next day from Hope to Horseshoe Bay, and I was lucky enough to catch the early ferry. My trusty bike is a 2012 BMW K1600GTL, which I’ve nicknamed Klunk for it’s familiar pronounced sounds when shifting gears. I am using and loving all of the bike’s features, from the heated grips and seat to the power-adjustable windshield for optimum wind and water deflection. Gasoline prices were at an all-time high, so the cruise control came in quite handy for fuel economy and to give my throttle hand much needed breaks. 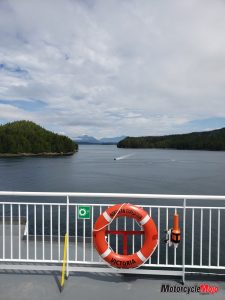 Highway 4 from Nanaimo to Tofino and Ucluelet on the Island’s west coast is quite twisty and bumpy, so I switched the ride mode to “dynamic” with the suspension mode set to “sport” to handle the massive bumps and dips in the road. I made Tofino with plenty of daylight to spare and explored the town on foot. On my way to Ucluelet for the night, I stopped at one of the larger beaches and, being a travel geek, I dipped my toe in the ocean while taking in all of the beauty that surrounded me. Home for the night was another incredible campsite nestled in between some massive trees. I felt so lucky!

Despite the short construction zone on Hwy 4 that I encountered, the road had the right amount of curves and adrenalin-pumping corners and hills. My plans to visit Carmanah Walbran Provincial Park to see the island’s biggest trees came to a grinding halt when I realized the road turned to gravel for the next 100 km or so. This is my first trip without a paper map, so I can’t fault the GPS. It would have been a dream road on one of my former adventure bikes, but not on my GTL.

My backup plan was to stop in at Macmillan Provincial Park, a.k.a. Cathedral Grove, and that park did not disappoint. Massive Douglas firs alongside the road and for as far as the eye can see. It’s amazing that something as simple as a tree can make you feel so peaceful and humbled at the same time.

Taking the scenic Hwy 19A, I began to spot bald eagles, a pleasant surprise in addition to my stop at the Highwayman Saloon rum house for lunch. This restaurant is a favourite stop for local riders.

I encountered more rain and temperatures of 8°C on the Island’s east coast as I made my way north from Courtenay to Port Hardy, with a quick stop in Campbell River for coffee and to layer on all my remaining gear. I know, I know – the inclement weather doesn’t usually last long.

I stopped for a quick photo of Port Alice before making my way north, all the while catching curious black bears on my GoPro. With my campsite set up for tonight, I ventured into Port Hardy to the local pub for some pizza and cold beer before making my way back to camp to get some sleep in preparation for the 6 a.m. ferry departure.

Sleep was a challenge, but I was up and at ’em bright and early to take the 16-hour ferry to Prince Rupert. I was impressed at the size of the ship and the modern design of its interior. Sixteen hours at sea is a bit too long for me, but considering it was a trip not soon to be repeated, I took it in stride and enjoyed the scenery as we sailed along the Inner Passage.

Arriving in Prince Rupert at midnight, I was one of the first few bikes off the ferry and I quickly found the local campsite. I set up my tent as quickly as possible so as to not annoy my sleeping neighbours. The night air was damp, so by early morning I was up and packed before my belongings got too wet from condensation.

I found a good use for my empty cider cans while camping: the ground was quite soft, so I put two of them under my Beemer’s side stand to prevent the oversize bike from sinking in the soft ground.

I woke up the next morning to the sound of steady rain, so dressed and packed up inside the tent, donning all my rain gear before I ventured outside. Even with Rain-X on my windshield, seeing was still difficult at times. However, I was in no hurry, so the pace was slow and easy until the sun came out three hours later. Home for the night was at the Williams Lake Stampede Campground, right where an annual rodeo was being held. I took in the local scene while watching some live performances, which made for an excellent end to my riding day.

During this trip, I got a wasp sting right in the middle of my forehead – the third time that has happened to me while travelling. I wore a ball cap that evening to cover the swelling while holding a cold beer to my head. Ouch!

The Best Riding in B.C. 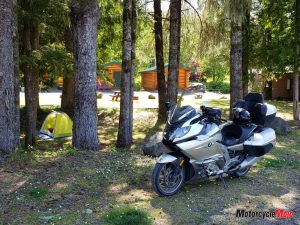 Riding south on Highway 97 toward Kamloops is what I would consider some of the best and most scenic road riding in B.C. The route runs through the middle of cottage country, showcasing pristine lakes and the best of Mother Nature’s backdrops. The only thing missing on this trip is my lovely wife to share all of this with. In Tappen, I tried stopping in at Rust Bros. – made famous in the popular reality-TV show Rust Valley Restorers. Unfortunately for me, they were closed, as it was Sunday on the Canada Day long weekend.

Just before my last night back in Revelstoke, I stopped in Craigellachie to see the historical landmark Last Spike, the location of the ceremony that celebrated connecting our nation’s railway from sea to sea in 1885. My experience there was quite humorous: as I was leaving, a group of Japanese tourists were all mugging around the bike for photos.

That night in Revelstoke, I found an amazing and peaceful open campsite next to a small waterfall. I took the time to sip on a few local ciders and stargaze before ending this great journey and heading home the following day. Despite some weather setbacks, I will look back on this trip fondly – as I do with all of my travels – forever grateful for the opportunity to travel another 4,150 km on two wheels.