Not all tires are created equal in longevity and consistent handling.

An adventure-touring tire has the hardest job in motorcycling rubber. Unlike a specifically focused sport tire (when edge grip and maximum braking stability are all you care about) or a cruiser tire (minimal wear, decent wet performance and don’t worry about cornering traction cause these bikes don’t have any ground clearance), an adventure tire must offer an almost impossible combination of dry and wet grip on tarmac, traction and stability when ridden off-road and excellent braking on both on- and off-roading surfaces. Oh, and if you don’t mind, we want minimal wear because, as the adventure touring theme promises, I might just take off to Tierra del Fuego next weekend. Then, of course, there’s the choice between more dirt-oriented adventure rubber (so-called 50/50 tires meant for equal helpings of on- and off-roading) all the way to the almost exclusively road-oriented 90/10 rubber. The choices seem endless; the proliferation confusing.

Having owned various V-Stroms over the past few years, I, too, have been a little discombobulated at the incredible variety of choice. I am a purely 90/10 kinda guy – gravel roads are my limit when the saddlebags are loaded and my significant other is on board – and even so, I’ve gone through about five sets of tires without being 100% satisfied.

Until now. I’ve just spent the past year or so riding my new-to-me 2018 Suzuki V-Strom 1000 XT from highway to byway and I am convinced I have found the best tire for my adventure touring: Avon’s Trailrider. 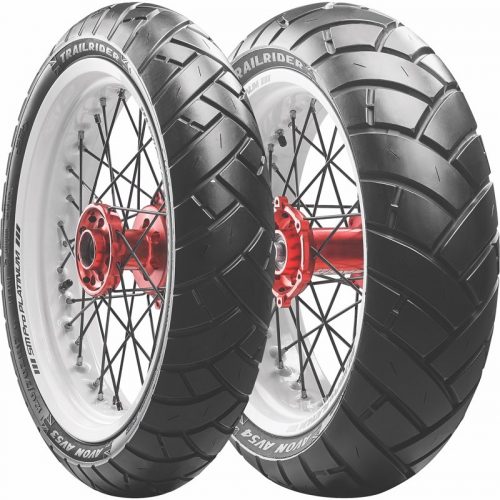 The Trailrider (which replaces the old Avon Distanzia model and is unlike the more dirt-oriented Trekrider) is a 90/10 touring tire, which means, if both we and the tire manufacturer were willing to be honest with ourselves, we won’t be seeing any bouncing and bounding worse than the average gravel road to our buddy’s cottage. Oh, the Trailrider will handle a slightly more Baja-istic trail with something approaching aplomb, but deep sand and wet grass are way beyond its pay grade. If that kind of off-road traction is what you’re seeking, then you’re reading the wrong road test.

What Trailriders do offer is the most neutral combination of stability and cornering of any adventure-touring tire I have ever tested. By neutral, I mean that when you’re heeling over, the front neither flops into the corner nor requires much countersteer effort to maintain its line. Neutral.

The Trailrider is more rounded in profile than any other adventure rubber I have seen, and my Trailrider-equipped Strom requires literally no input into handlebar after the corner is initiated. Once dipped, the big Suzuki simply holds its line as if telepathically connected. Indeed, if steering neutrality is foremost on your list of attributes for your next tire, then the Trailrider – like all Avons, actually – should be at the top of your list.

What makes this particular Avon model of tire even more amazing, however, is that unlike almost every tire I have tested, said neutral steering doesn’t seem to degrade as the tires wear. I have about 8,000 km on my 150/70-17 and 110/80-19, and despite the rear’s pronounced flat centre from endless highway sojourns between Toronto and Montreal, handling has not deteriorated one iota. Truly amazing. Even the Michelin Pilot Trails that I ran before showed significant reluctance to turn in by the time the rear was 75% worn; I replaced the Metzeler Tourances my Suzuki previously wore at about half their expected mileage because the big Strom’s steering had become so wonky. The rear Trailrider should be good for 11,000 or 12,000 clicks before replacement and, in fact, if things continue as they are, I may get all the way down to its wear marks before I notice any difference in the handling.

The Avon Trailriders are pretty good in other arenas as well. They inspire more confidence, for example, in the rain than either the Metzelers or the stock Bridgestones – although, despite some heat-generating “3-D sipes” and a high-silica tread compound, they’re perhaps not as aquatic-friendly as the Pilots. Indeed, were I from the Left Coast, where sunshine is as rare as a conservative politician, I might opt for the Michelins and just change them more often. On the other hand, the big Strom does have a very effective combined ABS braking system, so I am much less concerned about wet-weather traction than I used to be.

Which is the reason that the next set of tires – or should that be tyres? – that adorn my V-Strom will be another set of Trailriders. I have been spoiled by their excellent handling and, more important, handling that does not deteriorate with mileage. That’s enough to make me a loyal customer.