This could very well be the most definitive book on Triumph motorcycles.

Triumph’s story began in 1885 when Siegfried Bettman, a German immigrant living in England, began exporting Birmingham-made bicycles into Europe and subsequently manufacturing them. The motorcycle part of the Triumph story’s equation began in 1902 when Mauritz Schulte, Bettman’s partner, mounted a Belgian Minerva 2.5 hp engine to a Triumph bicycle. The rest, as they say, is history.

Ian Falloon, noted motorcycle historian and author of more than 45 motorcycle-related books, begins The Complete Book of Classic and Modern Triumph Motorcycles 1937 – Today with a brief history of Triumph’s early days. The book soon picks up the story of Triumph’s most interesting era, which began in 1937 when Edward Turner entered the scene as Triumph’s managing director and chief designer – titles that stretched into the chief of every department, including sales, engineering and styling. 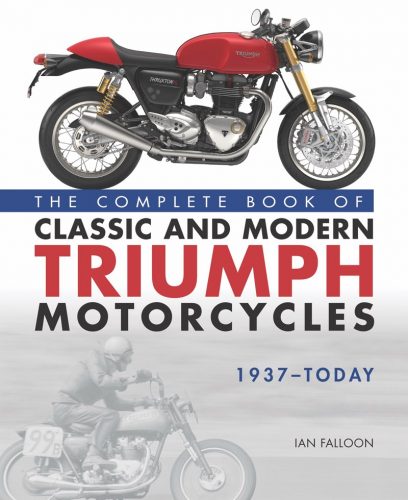 Falloon begins that part of the story with the launch of Turner’s Speed Twin in 1937, a bike that set the stage for Triumph to be a dominating force in the world’s motorcycle industry. Falloon continues with description of every minor and major model produced after that first Speed Twin and explains in more detail the era-defining models, such as the Thunderbird, Tiger, Trophy and Bonneville, and right up to modern motorcycles, such as the Speed Triple, Thruxton and Daytona 675. Included in the model descriptions are basic specs for each model and what changed on the models from year to year right up to 2019.

No history lesson would be complete without the financial troubles that plagued Triumph – and the whole British motorcycle industry, for that matter – and Falloon goes into details of the troubling times at Triumph’s Meridian plant.

Then the narrative moves into the current stage of Triumph’s life, after John Bloor bought the name and the rights to everything Triumph in 1983 and struggled to continue building motorcycles through Les Harris’ Racing Spares. Also described in the book are racing legends, hard-fought speed records and a few of the Hollywood stars that rode Triumph motorcycles.

This 272-page hardcover coffee table book, published by Motorbooks (ISBN: 9780760366011) with a retail price of $65 (chapters.indigo.ca), has hundreds of photos and is a must-have resource for any Triumph aficionado – or, for that matter, anyone who’s interested in the British motorcycle industry during its heyday and beyond.