The massive torque and horsepower were expected, but the finely tuned handling and braking propels this power cruiser to the top of its class and beyond

The original Triumph Rocket III is an anomaly among motorcycles. It’s a big, fat cruiser with huge torque, but that isn’t unusual. It did, however, break boundaries with its 2,300 cc in-line triple, which was the biggest engine you could get in a production motorcycle when Triumph launched the behemoth in 2004. Triumph has introduced several variations over the years, but for the most part they have been based on the same platform. Things change this year, and the 2020 Rocket 3 (Triumph changed the Roman numeral in its name) gets its first real redesign – and everything is new. There are two versions of the newly designed big triple: the stripped down Rocket 3 R ($25,900), and the slightly kitted Rocket 3 GT ($26,700). I got a chance to ride both bikes at their launch in Tenerife, Canary Islands.

Well, the first thing you should know about this new Rocket 3 is that it is no cruiser. Tenerife is riddled with twisty roads, almost endless switchbacks, sweepers and a few speed-coaxing straights – and the Rocket 3 handled them in the most un-cruiserlike manner.

The Rocket 3’s renewed styling is much more contemporary, blending naked bike and power cruiser in a way that makes the bike appear more like an action-movie prop than a production bike. The bike is long, with a wheelbase of 1,677 mm, and it looks striking whether it’s parked or strutting down a boulevard. It attracts attention from all types of onlookers, from young sportbike riders to vacationing retirees.

The clean silhouette of the Rocket 3 R makes it my favourite, with its low handlebar, mid-mounted foot pegs and streamlined rear end. The GT, while still quite the looker, is designed for more comfort and has a taller handlebar, a flyscreen, forward pegs, a height-adjustable passenger backrest and slightly lower seat (750 versus 773 mm). 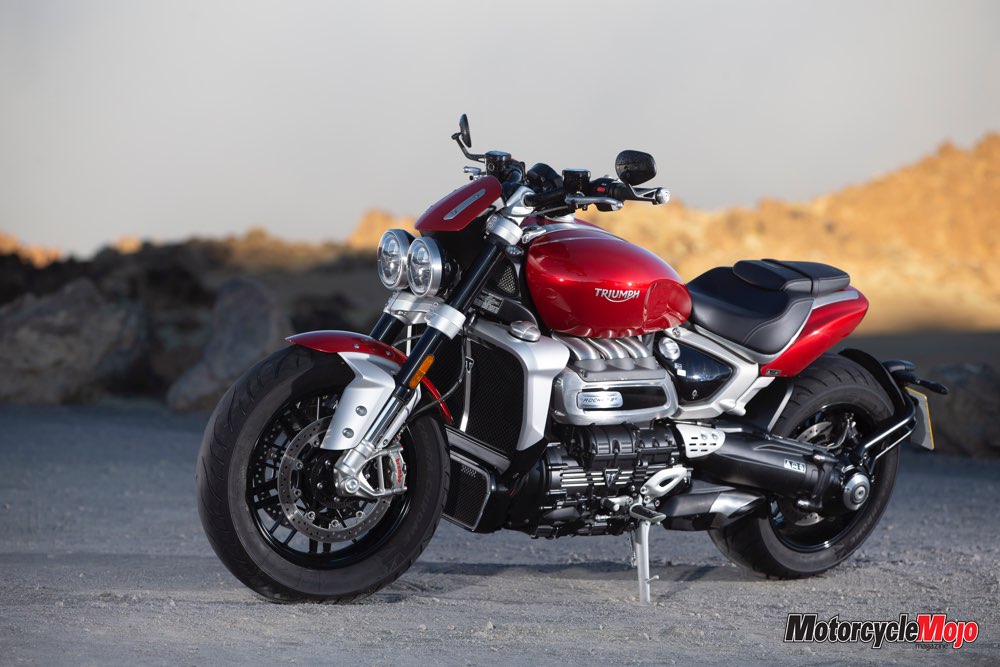 The Rocket 3’s most prominent feature, however, is its big engine. Look at the bike from either side and most of what you see is a big lump of sculpted aluminum. On the left you’ll find the intake runners, and on the right is the Rocket’s signature triple-header, which is now artfully hydro-formed and hand-welded, and looks like it belongs on a vintage fighter plane. The massive triple has a larger bore and shorter stroke (110.2 x 85.9 mm versus 101.6 x 94.3), and now displaces 2,458 cc (still the biggest engine on a bike), up from the predecessor bike’s 2,294 cc.

Claimed output is 165 hp (up by 11%), and torque is a massive 163 ft-lb, which is the highest you’ll find on two wheels. While peak torque is the same as before, it now extends over a much broader rev range. The previous bike’s torque began dropping off as soon as it peaked at about 3,500 rpm, whereas the new bike peaks at about the same engine speed but maintains maximum torque all the way to 5,000 rpm before tapering off.

The engine redlines at 7,000 rpm and it pulls hard until it bumps off the limiter. The gearbox has gained a gear – now numbering six.

The aluminum frame is entirely new, smaller and more rigid. The frame, engine and other major components have been lightened considerably, and the Rocket 3 has lost more than 40 kg. Showa suspension includes a 47 mm inverted fork that is adjustable for compression and rebound damping, and a single, fully adjustable rear shock.

A long, cast tube forms the single-sided swingarm, which houses the drive shaft. Wheels are 17- and 16-inches front and rear, respectively, and Avon developed the fat 150/80 (front) and 240/50 (rear) Cobra Chrome tires specifically for the Rocket 3. Brakes are by Brembo, with twin 320 mm discs up front and a 300 mm disc in the rear. Unique to the Rocket 3 are the radially mounted front and rear calipers.

Lean-sensing ABS and traction control, and four ride modes (Rain, Road, Sport and Rider-Configurable) are now part of the Rocket 3’s standard electronics. Ride modes are selected via a dedicated switch on the left-hand switch pod. A new TFT instrument panel is configurable and features a central round display flanked by two curved columns that show information. The panel is compact and the side displays are small, which may be hard to see for some (like me), but the panel is intuitively laid out and angle-adjustable to reduce glare.

The Rocket 3 also features Android or Apple smartphone connectivity via Bluetooth and uses the display and the bike’s switchgear to operate phone functions. A headset can also connect via Bluetooth, and you can get Google-enabled turn-by-turn navigation prompts on the instrument panel’s screen that uses your phone’s GPS – even with data turned off. This smartphone connectivity requires the My Triumph app, which is a free download.

New is a Bluetooth-enabled GoPro control system, which allows you to control your GoPro camera through the bike’s display via the handlebar switches. Also standard are LED lights all around, keyless ignition, “hill hold” function and cruise control. Heated grips are optional on the R; standard on the GT. You can charge your phone while riding via a USB port that is mounted inside a watertight compartment under the seat. 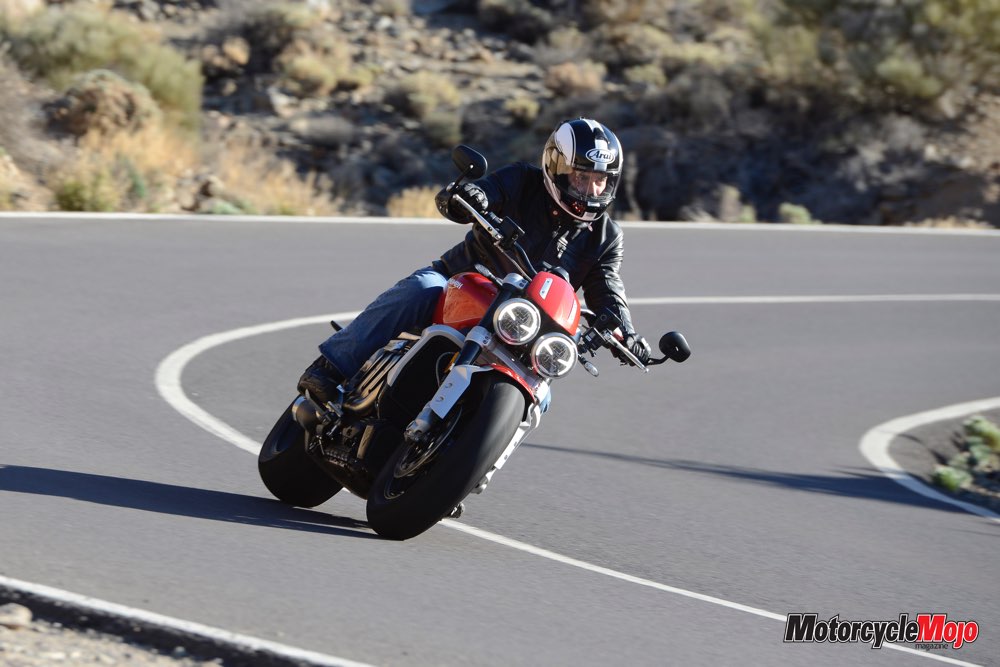 I came to the new Rocket 3’s launch with certain expectations. The bike’s power was a given, as the huge torque was already a commanding feature on the previous model. What I anticipated was an improved Rocket 3 that would exhibit better handling than its predecessor, the latter of which handled respectably for what it was — a big, fat cruiser. After riding this new Rocket 3, I realized I had greatly underestimated the capabilities of the engineers at the Hinckley factory.

When the key fob is within range, flipping the kill switch turns the ignition on, and the same switch works the starter. When the Rocket 3 fires up, it sounds imposing, but not threatening, and produces a distinctive Triumph triple drone – only much, much deeper than on previous models. Once you get rolling, the machine exudes an almost industrial presence; it sounds and feels mechanical, and while relatively smooth, it transfers enough vibration through the chassis to remind you that you’re sitting on an engine that’s bigger than in most small cars.

Lifting the Rocket 3 off the side stand requires little effort, a reminder that dropping 40 kilos makes a big difference; claimed dry weight for the R is 291 kg, and three more for the GT. I began my ride by following Triumph’s guide rider, who is a track instructor in the U.K. with whom I’ve ridden before. He immediately sets a pace that would make a sportbike rider sweat trying to follow – and this is where I was really impressed by what the guys at Hinckley did to the Rocket 3.

I originally thought the bike would need to be eased into corners, and would respond better to a gentle, reserved approach to twisty roads. Instead, I charged hard into corners while hard on the brakes, trail-braking deep toward the apex. The bike responded with remarkable stability, its chassis exhibiting not even a touch of flex.

Steering was surprisingly neutral, especially when considering the bike’s length and the width of its tires. Steering is even more neutral than on the Ducati Diavel, which also handles exceptionally well, but has a slight tendency to resist leaning. Cornering clearance on the Rocket is generous, with the foot peg feelers touching pavement only at exaggerated lean angles.

Cornering clearance seems about the same on both the GT and the R, although the R’s more aggressive riding position is better suited to sport riding. The Rocket 3 also obediently performed mid-turn corrections, readily allowing a tighter line if needed. The bike is surprisingly forgiving, and even mid-turn application of the brakes didn’t upset the chassis. This is not how I expected a big power cruiser to behave. 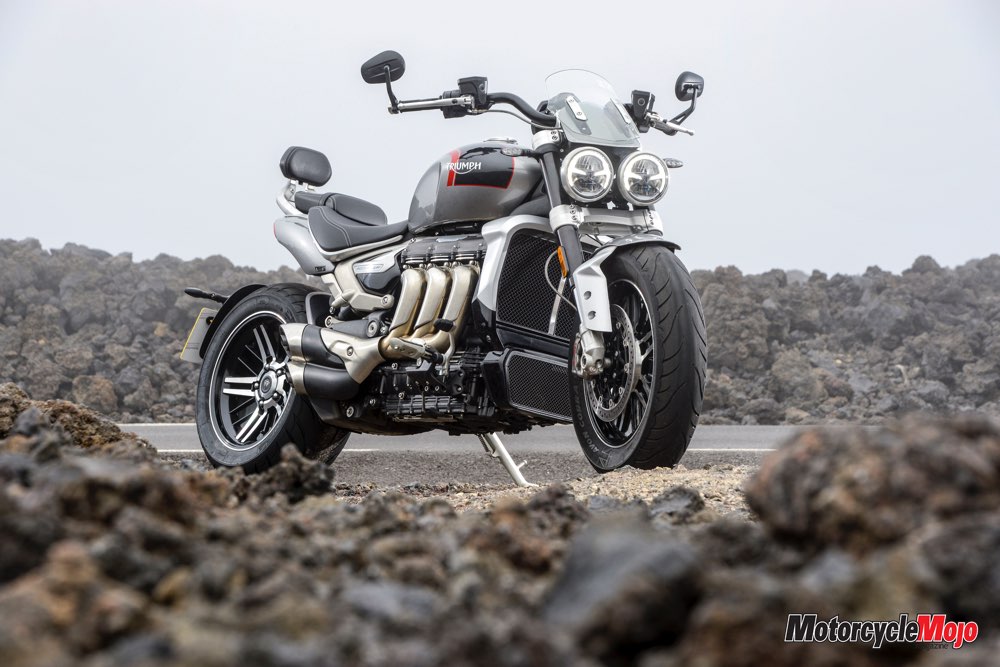 Powering out of corners is a big part of the Rocket 3’s appeal, especially as grip from the fat rear tire combines with the engine’s huge torque to rocket you to the next bend. Even in Sport mode there’s no abruptness in throttle response, although I did prefer the softer Road mode when riding sedately through town. Shifter throw is short and light, although the Rocket 3 doesn’t really care which gear you choose. The engine doesn’t scream to stratospheric revs, so speed is deceptively masked, although slowing for a turn reminds you of your velocity. The brakes are very effective at slowing the beast, with only mild fade detected on long downhill sections – and that was after some abusive hard braking.

The bike’s only notable handling peculiarity is something I haven’t felt on a motorcycle in a long time: drive shaft jacking. Without added pivot points and stabilizing links along the final drive, shaft-driven motorcycles have a tendency to jack up in the rear when rolling on the gas and squat when rolling off. Triumph manages this tendency through chassis geometry by using a long swingarm, which reduces the drive shaft’s leverage on the suspension. However, the engine’s huge torque still affects the suspension: while the Rocket 3’s rear doesn’t jack up when getting hard on the gas, the suspension’s ability to absorb bumps is affected. This harshens the ride, but only when hard on the throttle, and more so in the lower gears. Aside from that, the suspension is comfortably compliant, yet provides wallow-free control at an elevated pace on winding roads.

Yes, the Triumph Rocket 3 is an anomaly among motorcycles, and feels oddly like you’re riding an engine that handles. And this latest version handles exceptionally well. It has an excellent chassis, huge torque, a distinctive sound and it’s easy on the eyes too. If you’re thinking of writing off the Rocket 3 as a novelty due to its “biggest engine in a bike” status, I assure you that the new Rocket 3 is the real deal.