Even an experienced rider can learn new tricks.

Mark Kruger has the nickname Kramer for a reason: tall, lanky and quirky – he describes himself as a “scrawny guy, a little bit crazy with an ego.” I used to race with Kramer back in the day – not against each other, as we were in different classes, but I knew him from the track as an eight-time Supersport Champion. Now he runs a successful rider-training program called Pacific Riding School (pacificridingschool.com) in Surrey, B.C., where he and his staff teach first-time riders. New riders take a program certified by the Insurance Corporation of British Columbia to obtain their Class 6 licences, ensuring they are safe and well prepared for all road-riding situations. Kramer is also a BMW Motorrad Certified International Instructor (enduro) and offers beginner and advanced off-road courses for clients. 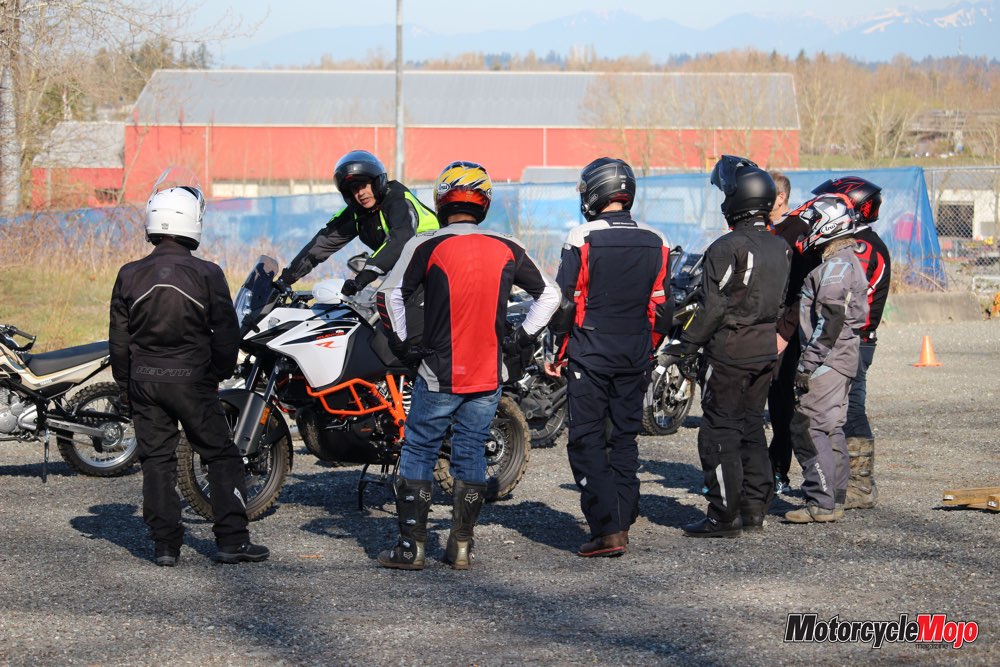 I ran into Kramer at the Vancouver Motorcycle Show and he invited me out to try his beginner enduro training course. Then, on a gorgeous sunny day last spring, I showed up at his training facility by the Cloverdale Fairgrounds ready to ride. I’ve ridden dirt bikes and done some flat-tracking and motocross riding, but have never really ridden anything enduro-ish.

I began my course on a Yamaha XT250. (Kramer said I could use his BMW 1200GS after he saw me ride a smaller bike first.) Before the course began, instructors Malcolm Cairns and RD Merritt adjusted each student’s levers and had the students sit and stand on their bikes to make sure everything was set up correctly. There were five other students (all men), although Kramer did mention that his next course had nine female students.

Kramer’s coaching style is laid-back and relaxed – like hanging out with an old friend or a slightly annoying little brother. He outlined how the course would go, talked a bit about using “slow strong hands, not wild spiky hands (for braking).” Then he reminded us to “stay with the objective of each lesson.”

Walk Before You Run 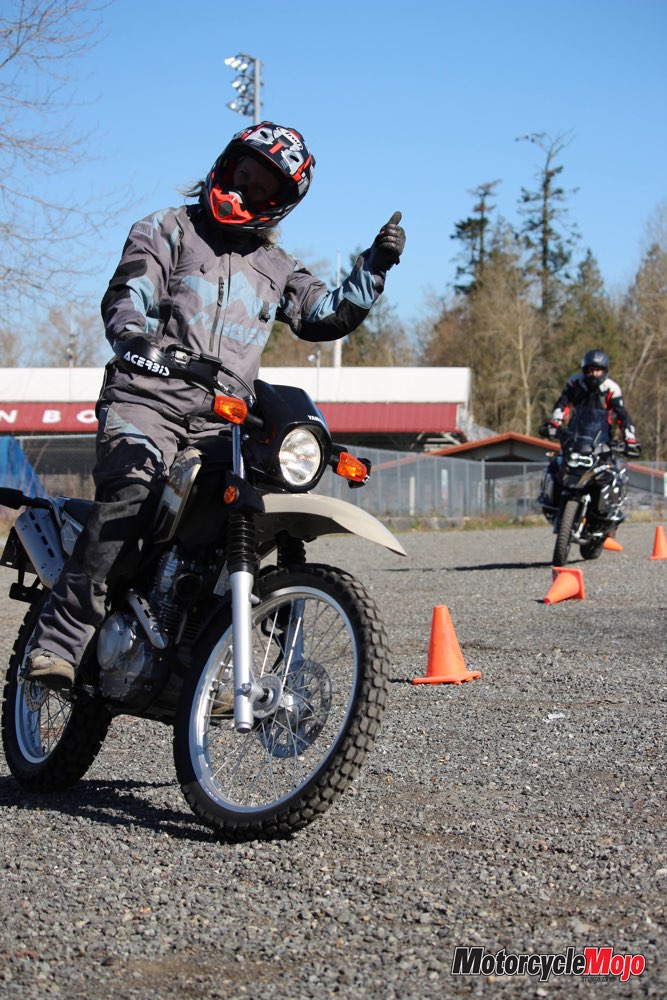 We began the day by putting our bikes in neutral and, with the engine off, walking them along the pavement for a bit, turning around and walking them back to get used to the weight and balance of the bike. From there, we started our bikes’ engines and put the bikes in first gear and, using the throttle this time, walked them up a hill and around a corner. The purpose of this exercise: sometimes while in the bush, you may encounter obstacles that you can’t ride over and will need to manoeuvre your bike over or around something by walking beside the bike. (I’ve done this dozens of times in the bush when riding my Yamaha YZF250 and, most recently, on my new, smaller YZ125, but this exercise still was good practice.

After that, we headed to a large gravel training area that featured some carefully placed cones and other obstacles, where we were given a brief demonstration on motorcycle gymnastics.

We first rode around in the gravel to get a feel for the bikes, then we lifted our right leg over the seat and stood on the left foot peg and did some loops before switching sides to repeat that exercise. For those of us who were comfortable enough (all of us in our group), we were challenged to put both knees up on the seat and complete a lap riding around that way before doing a final few loops with our left hand completely off the handlebar and held out to one side. This exercise was to really emphasize the need for gripping the fuel tank with your knees while standing up in the enduro riding position – “attack” elbows with a slight bend; eyes up, looking ahead; knees pinching the tank and slightly bent; toes straight or slightly inward; and heels on the pegs with right foot covering the rear brake.
Then we did some slow races in order to practice our clutch control and balance by riding as slow as possible. During this exercise, Kramer enjoyed watching the instructors and me battle for the title of Slowest Rider. “Racers!” Kramer laughed, rolling his eyes at me. “Sooooo competitive!”

Steer With Your Feet

After the slow races, we did some slalom riding through cones. Kramer explained the process: “Look past the cones, steer with the foot pegs – stomp down on the peg [on the side of the bike] in the direction you want the bike to go.” This, for me, was hugely helpful: even though my husband, John, had always told me to steer with the foot pegs, I never believed him because it’s something you just don’t do while riding sport or road bikes. However, weighting the foot peg on the side you want to turn really helps to aggressively dig into the turn. This technique made a huge difference in my ability to get through the cones without knocking them over and, later, in my cornering on the motocross track.

One of the most challenging exercises was the “box turns”: 180-degree turns that had to be done inside a box outlined with cones. The idea is to enter the box, steer with the pegs and, once the bike is turned, lean your body to the opposite side and weight the outside peg. Kramer sat watching and, dare I say, laughing at me. “Road racers always look so uncomfortable in this exercise,” he giggled. “Lean away more!” He shouted at me, “It’s the exact opposite of a road racing-style body position.” He was practically cracking up and I kind of wanted to punch him. I knew that I looked as uncomfortable as I felt, but I kept trying and soon I had the turns nailed! This is the exercise in which some people tipped over and struggled to make the turns inside the confines of the box, but the eventual overall improvement of the group was impressive.

The next exercise was to ride our bikes over to a small “hill” – more like a mound of dirt. We were instructed to compress the bike’s suspension at the base of the hill, where you can get the traction to bite, then give an almost simultaneous twist of the throttle to get enough momentum to be able to pull in the clutch and coast up the hill.

Getting the timing of this was challenging, especially with a dozen pairs of eyes watching, but it was fun – and, as with most of the exercises, we got the hang of things after a few tries.

Then we did the opposite and practised downhill coasting. The focus was on body position, pinching the tank with the knees, eyes up and arms loose. During the morning, we were reminded several times to drink lots of water and to avoid coffee. Kramer practically slapped me on the wrist when I went to pour myself a cup of the latter, so I had to wait for lunch to drink a steaming cup of delicious caffeine energy.

During lunch, Kramer worked the barbecue, grilling up burgers and hot dogs and serving a good amount of water, watermelon, chips, veggies and, finally, coffee.

After lunch, I asked Kramer if I could try out his personal BMW R1200GS – a bike that’s bigger and heavier than anything I’ve ridden before. Lifting it off its side stand proved very challenging.

However, the more challenging part was trying to hold the thing upright when both my feet weren’t able to touch the ground at the same time. I could barely hold up the BMW on flat pavement and having to hold it up with one tippy toe was very stressful for me, so Kramer took the seat off for me. How embarrassing! But then I was able to hold up the gigantic machine with more confidence and less fear of tipping over. I’ll admit I was a little nervous riding the big bike, but I was absolutely shocked the moment I started off at how light and manoeuvrable it instantly felt.

In the gravel slalom course, the BMW just worked – effortlessly. Stomp on the peg, lean the other way, weight the outer peg, repeat, and I was easily through the course without missing any cones.

After that, I wasn’t ready to try the tight box turns yet, so a fun braking exercise was next. First, with the rear brake only: relaxed arms, squeeze the tank with your knees, get up to speed and lock up the rear brake. While the bike is skidding, relax, lean back a bit with bent arms and legs, and keep your eyes up. Then we practised (gently) with using the front brake only to get a feel for how the bike reacts when the weight is all on the front tire in gravel. This exercise was useful for me, given that in enduro and dirt riding you use more rear brake. In road racing, you use the front brake almost exclusively.

Another useful, slightly scary exercise was to ride along a paved road, then make a very sharp left turn, ride up a small hill, then along a grassy off-camber hill and then make a sharp left and ride down a grassy hill. This exercise put all of the previous skills together – compress the rear tire and give one good throttle braap up the hill, then practise front brake control while riding down hill as slowly as possible. This is when Kramer got super-goofy and tried to distract us while we were riding down the hill – at one point, while I’m slowly creeping down the hill, he pretended to be an elderly person crossing the street in front of me. It took a lot of effort for me to maintain focus and enough control to not hit him.

After a little break, we got to play around on a few structures. First, we rode over what Kramer called a “cattle grate,” which was more like two wooden pallets, to practice the timing of the throttle blip and a little compression of the suspension to help the bike “pop” up and over the first skid. Then we checked out our balance by trying to ride over a skinny wooden beam. After that, we took a fun little ride through the forest to put everything together.

All in all, the course was a very fun and informative day of riding. It was a little basic for someone with my experience level, but there still were several fundamental lessons I took away from the class. As well, the combination of Kramer’s quirky and laid-back comedic style, paired with the more technical and focused style of the other two coaches, made for a perfectly balanced day of riding instruction.

Everyone in the group had a blast and left with some valuable new riding skills. Hopefully, I’ll get the chance to test out the next level of enduro course that the Pacific Riding School offers in order to take my off-road riding to a whole new level.