I guess that most of us have milestones in our lives pinpointing significant times of excitement or happiness. The arrival of my Uncle Harold into my life was just such a time for me. 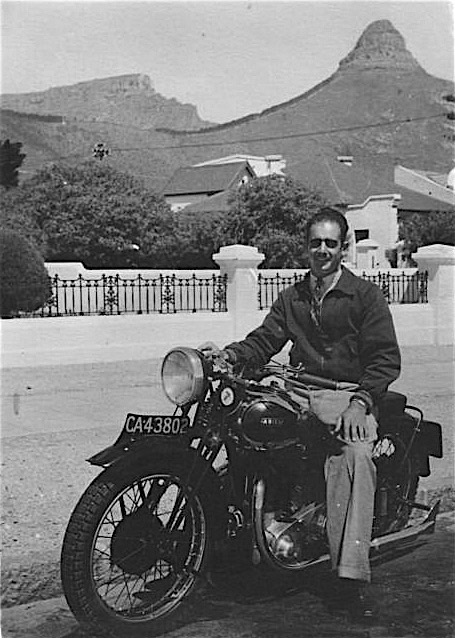 He was my dad’s younger brother and only 11 years older than me, so the gap between us was not too much so as to get in the way of our mutual interest – motorcycles! They had always fascinated me, and this probably came from getting rides on my dad’s Ariel Red Hunter when I was two years old.

When Harold first came to stay with us, he was about 21 years old and the proud owner of a brand-new Velocette LE (manufactured by U.K.-based Veloce Ltd.). This was his daily transport to and from his work, and the bike proved to be not only a very unusual machine (because it was so quiet when running), but also because it had built-in leg shields that provided very good protection against bad weather.

Harold soon made friends with other motorcyclists and, not long afterward, I was introduced to a wide variety of motorcycles that I hadn’t seen before. For example, John, who lived around the corner from us, had a 1942 ex-army Harley-Davidson with a sidecar and, for a young teenager, a ride in this sidecar was very exciting. Sometimes, John would remove the sidecar and ride solo. This bike had a huge saddle, called a “buddy seat,” that was large enough to accommodate two adults. It had two handles at the back for the passenger to hold onto and any passenger had to hold on tightly, as John liked to take off by revving the engine and then dumping the clutch so the machine would suddenly leap forward. 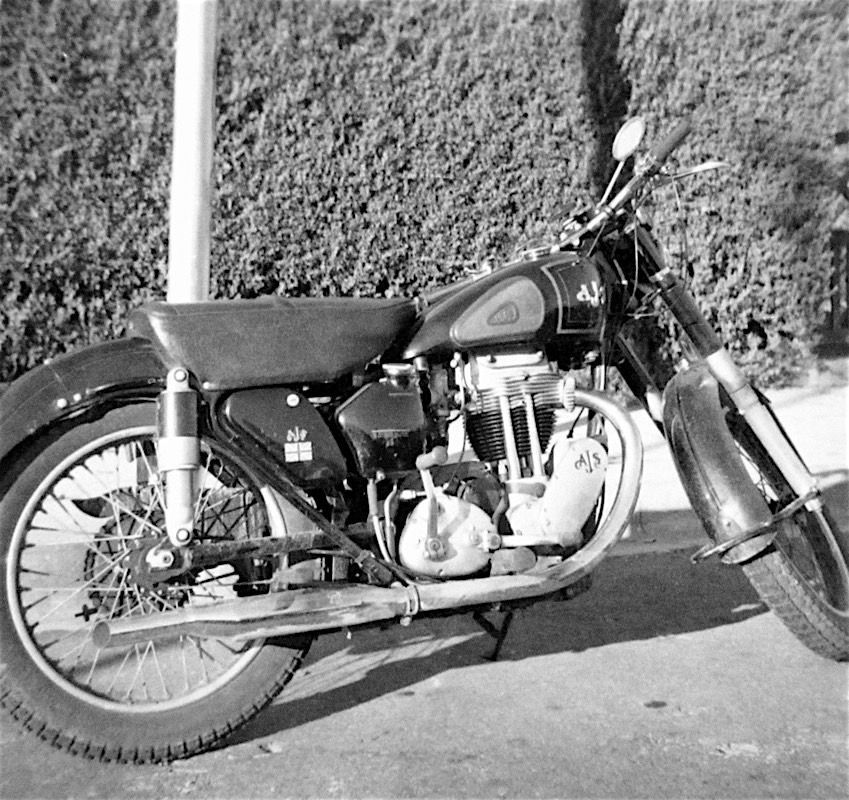 Then came the day when Harold came home with a brand-new 1953 AJS 18S (manufactured by U.K.-based A.J. Stevens & Co. Ltd.). This was a 500 cc single, and after he had rode the bike for a while he decided that he wanted to improve its performance by fitting a higher-compression piston. The original piston was of split-skirt design, which could run with a tighter running clearance than the high-compression piston, which had a solid skirt and needed greater clearance. I learned many things from Harold and he showed me that the AJS used hairpin valve springs, which were unusual in those days. The fuel available back then was low in octane, so in order to get the best performance from the engine’s higher compression, he added benzole to the fuel.

That AJS gave us a lot of pleasure. I say “us” because Harold was kind enough to take me with him on rides often. I didn’t realize his motivation at the time, but he took me along in order to teach me how to ride safely and always try to anticipate what other road users could possibly do and make allowance for that.

One day, Harold came home and told me that he had ordered a brand-new BMW – a 600 cc R67/2 –which would be arriving in a few weeks’ time. 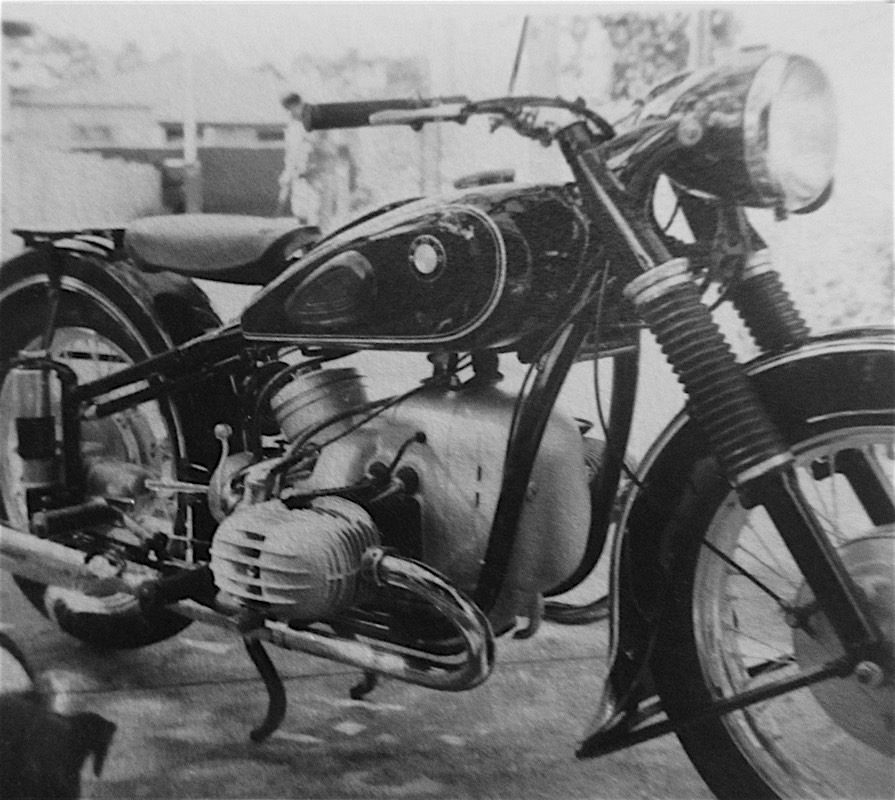 Finally, the call came to tell us that the crate with the bike had arrived at the dealer and that we could come down to unpack it ourselves – a special request that Harold made when he ordered the bike. The next morning, we opened the crate. Inside was the BMW, all wrapped up in special paper and insulation to protect it in its travels from Germany to South Africa, where we lived.

That morning was spent degreasing the exposed parts and assembling the machine until finally it was clean, assembled and ready for its predelivery servicing. All the oils and lubricants were checked and topped up where necessary. Finally, Harold opened the toolbox lid in the left-hand kneepad on the gas tank. The lid was held in place with a lock and hinged downward to open. The toolbox contained a beautiful set of chrome/vanadium tools held in a cloth tool roll. There was also a tire repair kit containing spare valves, valve caps, a pressure gauge and even a BMW-badged lapel pin. A separate package contained the owner’s manual, a list of dealers worldwide and other pertinent information.

The ride home was spectacular, even though the bike did not have a pillion seat; I sat on a little metal rack that was bolted to the top of the rear fender. Enthusiasm hid any pain that this little rack caused! When we got home and dismounted from the bike, there was the lovely smell of hot new paint – something unforgettable for me.
Having this new motorcycle into our garage was like welcoming home a long-lost relative, and I couldn’t stop looking at the bike and admiring it at every chance that I had. The BMW was beautifully smooth, with almost no vibration at all, and the lovely sound of that flat twin Boxer engine was the sweetest of music to my ears.
Cape Town, where we lived, is a city on a peninsula with an ocean on either side – the Atlantic and the Indian. There is a coastal road that surrounds the city and gives one the opportunity to go for a wonderful daylong ride. Also, in close proximity to the city, the national road twists and turns through mountain passes that allow easy access to the interior of the country.

During one of our weekend rides, Harold found a long stretch of straight road on which there was not a continuous stream of traffic. He stopped at the side of the road, dismounted and said to me, “Okay, now you can take it for a ride by yourself.” I climbed on, thinking that my heart would burst from excitement as I selected first gear and set off on my own. I have never forgotten the feeling that I had as I opened the throttle and felt the surge of power as I accelerated away. For me, this became one of those milestone moments in my life – a time that I had thought about many times and now was the culmination of all of my dreams to that point. The day was warm and full of the scent of the countryside, which just added to my feeling that even Heaven could not be better than this.

All too soon, the ride was over, but my love for BMW motorcycles and my ambition to own one never left me. Later in my life, I was able to fulfill my dreams: first, I owned a new BMW R50; later, a BMW R75/6. I rode the latter until I reached the age of 78, at which point I decided that it was time to quit motorcycling and find other ways to fill my retirement years.

However, my love of motorcycles never died, and my heart still skips a beat when I hear one of the modern multi-cylinder bikes winding up through the gears at high revs as it goes past my house – and I silently thank Uncle
Harold for leading me into this wonderfully exciting world of motorcycles.