The anatomy of what happens when a mountain-bike rider builds a custom street motorcycle with attitude.

Mountain bikes are cool. From the top of a hill, gravity pulls a rider at speed over a variety of obstacles and down to the bottom. But once down there, as Kevin Bergeron aptly points out, in order for the process to repeat the two-wheeler has to get back to the top.

“I love mountain bikes,” Bergeron says, “but I hate pushing the bike up the hill.”

Bergeron grew up in Sherbrooke, Que. At 16, he moved with his family to Alberta, where his late father, Steve, a heavy-duty mechanic with an interest in aeronautics, was always be found tinkering on something in the garage. A passion for wrenches and iron was passed to Bergeron, and he began building high-end mountain bikes.

“But it was always a dream to own a motorcycle,” Bergeron, who now lives in Calgary, explains, “because they had two wheels, made noise and went fast.” 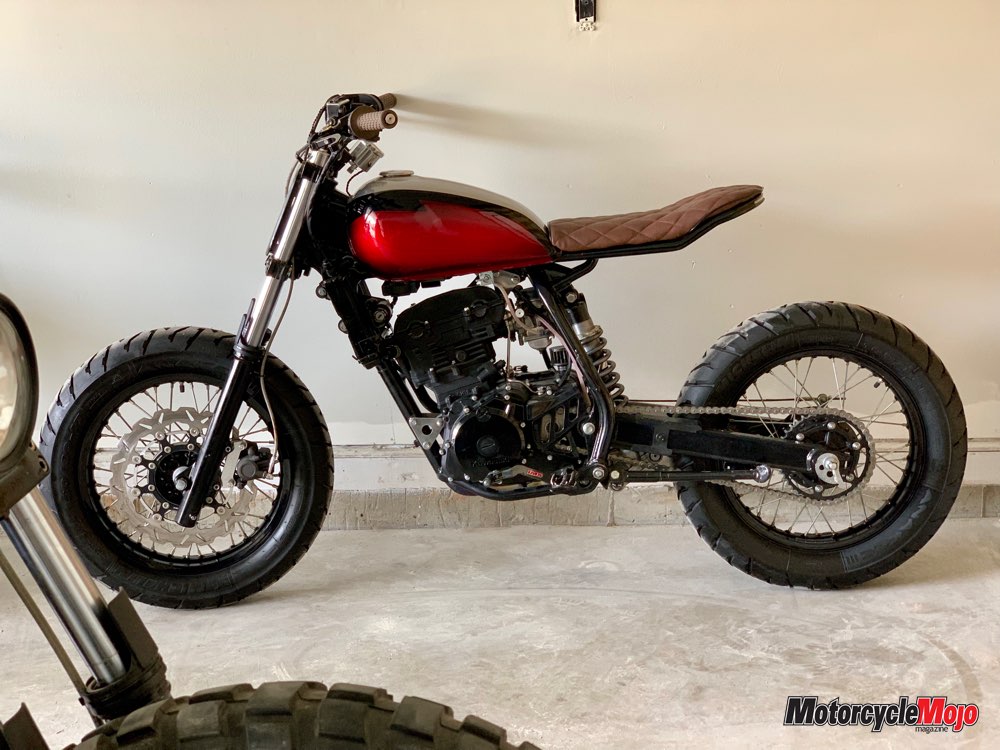 However, Bergeron’s first adventure with a motorcycle didn’t go well after he traded his car, an Audi A4, for a Buell Firebolt.

“That was a horrible bike to learn on, and because I was used to banging about on a mountain bike, the Buell also wasn’t really my style,” says Bergeron, now 26. “I’d always been interested in the dirt bike side of things because of the mountain bikes, but I didn’t have the wherewithal to pull off a dedicated off-road motorcycle. That’s when I wondered if I could possibly have the best of both worlds and bought an old Kawasaki KLR250 enduro – something to get to the trails, have a great time in the dirt and ride back home.”

Bergeron set to work in his dad’s 14.5-metre by 14.5-metre garage and tore apart and customized that 1984 KLR250, taking many of his design cues from the world of mountain bikes. After that build, he says, he did the “hipster thing” and built a few scrambler-style Honda CB models, including a 400, a 350 and a 100. He also cut and modified a Suzuki DR650.

Have to Start Somewhere 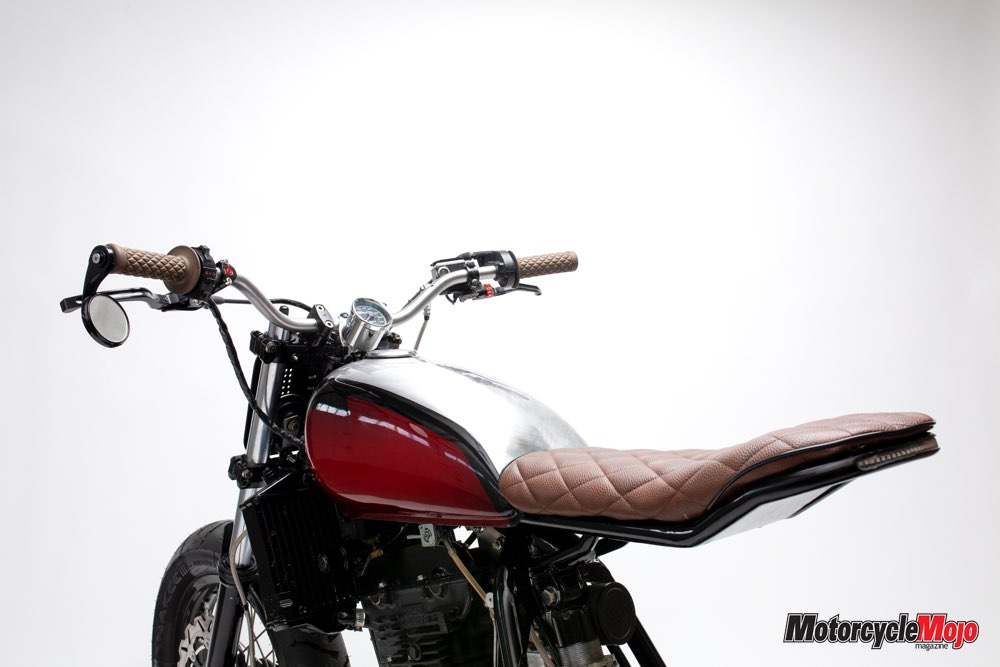 “I built about a dozen bikes over a four-year period,” Bergeron says. “Not all of them were masterpieces, but I’d build one and sell it to fund the next one. Those previous bikes were well received, both online and at shows such as Ill-Fated Kustoms’ Kickstart and the One Moto Show (in Portland, Ore.). That motivated me to keep building.”

Unfortunately, Bergeron lost his dad in April 2015, but inherited all of his dad’s tools. Bergeron says building bikes using his dad’s machinery and tools is an important part of the entire process, and is something special.

Bergeron became a firefighter/paramedic even though he was trained as a heavy-duty mechanic. Now that he works four days on/four days off, he routinely spends his days off in his three-car garage.

And that brings us to the 1994 Kawasaki KLR250 seen here, a motorcycle Bergeron built for a friend who was deployed in Afghanistan during much of the construction process and now is back there again.

As Bergeron says, “He gave me the go-ahead to pretty much do whatever I wanted.”

The KLR donor bike was purchased “for next to nothing” from a police officer in Calgary. Just about everything on the machine had been blacked out, and the bike was hard to start.

Those obstacles didn’t matter to Bergeron. He stripped down the KLR and opened up the engine. Inside, he discovered the issue was a couple of bent valves. Instead of rebuilding the powerplant to stock specifications, he went online and ordered a big-bore kit meant to hop up the top end of a Kawasaki KSF250 Mojave quad. That’s the same engine as is found in the KLR, and the kit, which has a cylinder barrel, piston and larger valves, boosts capacity to 330 cc. Bergeron had the head ported, polished and machined to accept the bigger valves and split the cases to check the crank.

The crankshaft was in good condition, but while the engine was apart, the cases, cylinder and head were powdercoated in black before being reassembled with all new bearings, gaskets and seals.

With the powerplant buttoned back together, Bergeron turned his attention to the frame.

“The front half remains virtually untouched,” Bergeron says. “It’s got a good rake from the factory. But to make the rest of it as minimalist as possible, I like to do a floating seat design.”

Bergeron removed the stock rear frame loop, fabricated a new section made of tube and welded this to the front half of the frame. This main tube is braced with two shorter sections of bent tube, and the back of the loop incorporates the taillight and turn signals. Under the seat, which Bergeron made using ABS plastic heated and bent to take on the shape he wanted, lives a small battery. Then he upholstered the seat with a thin sheet of high-density foam with a brown vinyl cover glued over top.

A Variety of Parts

Up front, Bergeron used a fork meant to fit a Kawasaki KLX600 to give his machine some supermoto attitude and a larger 320 mm brake. To make all this fit, he pressed the steering stem from the lower triple tree of the 250 into the lower tree of the 600. Then, with the entire unit shortened by 3.8 cm using progressive springs, he had a KLR250 rear hub laced into a 17-inch rim using spokes and nipples from Buchanan’s Spoke and Rim to give the bike a new front wheel. A job that was done by Giordano Bassi of Ill-Fated Kustoms.

The rear hub is stock for a KLR250, but Bergeron took the wheel apart to powdercoat the pieces and laced it back together, again with parts from Buchanan’s Spoke and Rim. Tires front and rear are Michelin Anakee 3s. Rear suspension is provided by a single KYB shock absorber with a stiffer spring installed. Bergeron shaved the chain slide and guard mounts from the aluminum swingarm and powdercoated the swingarm black. Many factory tabs were shaved from the front frame loop, and Bergeron lowered the radiator by about 5 cm from stock.

Next, Bergeron selected a gas tank meant to fit a Suzuki GS400. He fabricated a rubber-mount system so the tank slides over grommets at the front of the frame. The rear of the tank is bolted down and the seat covers the bolt head. He made his mods on a used tank, but, Bergeron says, it was in really good condition, so he stripped it down to bare metal. He sanded the tank top in a directional pattern and painted the sides using House of Kolor Candy Apple Red bordered by a black and purple stripe. Everything was clear-coated, including the bare metal top.
Believe it or not, the handlebar is stock, with a Brembo master cylinder for the brake. Signal light and high/low beam control is an unknown brand, while the grips are from Biltwell.

Bergeron used mild steel to fabricate the header pipe. It was pie-cut and welded together and, instead of applying a high-heat coating, the metal was sanded and polished with 220-grit sandpaper before being rubbed down with WD40.

The frame was powdercoated in high-gloss black by Calgary Powder Coatings, where the flat black coating on the hubs and engine parts also was done. Many of the fasteners Bergeron used to finish up the KLR are stock, although engine case bolts were switched out to stainless steel by the previous owner. These were simply cleaned and polished for reuse.

Bergeron débuted the finished KLR in May 2019 at the fifth annual Kickstart show hosted by Ill-Fated Kustoms at the Christine Klassen Gallery in Calgary. After that, the keys were handed to his friend, who was back from Afghanistan for a few weeks and got in some riding time and created some memories on the new machine before returning to active duty overseas.