Plenty of storage capacity and extreme comfort make this a fantastic long-distance touring bike, but it isn’t without
its weaknesses

Most bike models get leaner and meaner with age, but Yamaha’s resurrected luxury tourer got a little slower and lot baggier. Just like the rest of us.

The road, at times, can feel like an old friend. The way you drop into a state of mind about 500 km into a trip, lulled by the murmur of the tires on the road and constant shush of the wind.

That’s how it was for me as I finally settled into the cockpit of Yamaha’s 2020 Venture Transcontinental, a new twist on the company’s on again/off again luxury tourer – the Venture Royale (’83-’93) and Royal Star Venture (’99-’13) – this time powered by a 1,854 cc air-cooled V-twin instead of the liquid-cooled V-four that helped make previous Ventures popular.

This 2020 bike is big by anyone’s standards: at 2.7 metres long and 437 kg. In the weeks prior to my time on the Venture, I’d reviewed eight other motorcycles, everything from urban all-rounders to adventure tourers, and each provoked fatigue and niggling pain (primarily in the bum region).

By comparison, the Transcontinental felt like riding on a cloud, which is surely the primary goal for any luxury tourer. 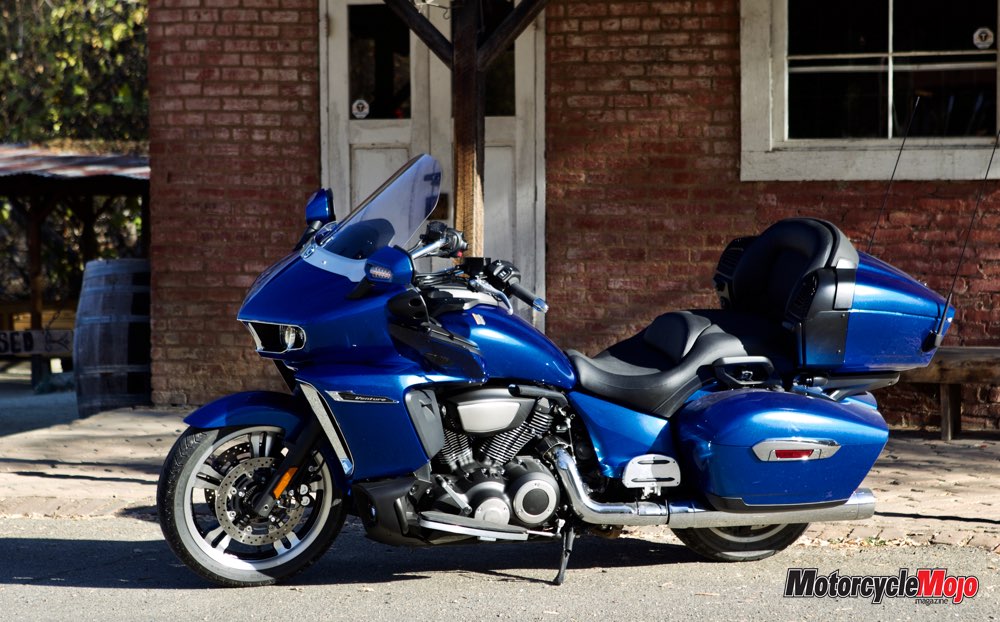 It occurred to me early on that Yamaha very purposely attached the name “Transcontinental” to its new Venture. You don’t take a boat across the ocean, it says; you take a ship.

Aside from her enormity, the first thing you notice as you grip the swept-back cruiser-style handlebar is that your hands are a very long way from the front wheel. And until you get used to the bike’s physics and the slight delay in steering feedback, she wants to totter.

Add a consistent dash of torque and a hint of rear brake, however, and the big machine becomes almost magically agile and well mannered at around-town speeds; its super-low centre of gravity acts like a gyroscope during the slowest manoeuvres.

After busting out of the city, my first hours on the Venture were on the highway, undoubtedly this machine’s strong suit.

The concept of luxury touring began in the early ’80s when Harley and Honda released their first fully dressed long-distance tourers, which were bikes with factory-installed fairings and hard side and top cases. By the end of the ’80s, BMW, Kawasaki, Suzuki and Yamaha had joined the game.

Today the market is still a competitive one, although with clear lines drawn between the American V-twin tourers from H-D and Indian, and the sportier multi-cylinder offerings from Honda and BMW.

In the past Yamaha has come at the market with a powerful 1,197 cc, 70-degree V4 engine borrowed from its famously fast V-Max, although sans the V-boost that made the sport cruiser so rowdy.

Like many riders, I was surprised when I learned Yamaha had departed from its V4 in favour of a big, air-cooled V-twin. I mean, why discard your own niche to clip-clop behind two powerhouses with genuine rights to the nostalgic V-twin market?

Yamaha’s stated plan is to fall into some middle ground between the U.S. luxury tourers and the tech-forward multi-cylinder options by means of Yamaha’s U.S. muscle car aesthetic. A reasonable plan, except that it relies solely upon styling.

I’d hoped to find Yamaha’s V-twin wonderful, but once on the road I found it merely adequate. While there is certainly a gratifying amount of torque and robust acceleration from low gears, the mill’s top end – that giddy-up you need at highway speeds when you want to pass – is lacklustre.

Getting To Know You 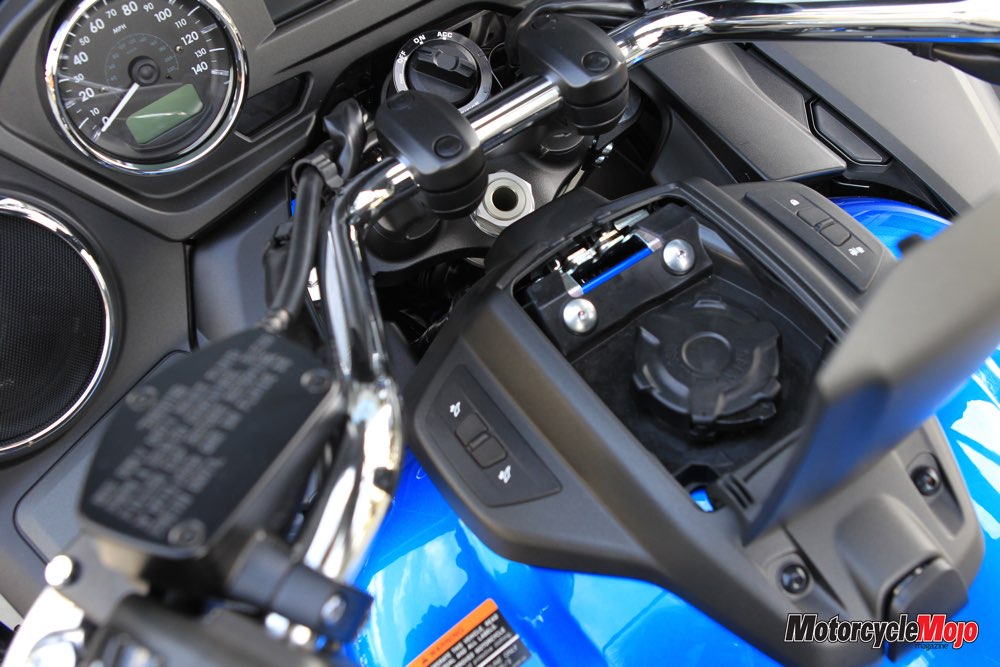 Right out of the gate, I spent 10 hours bisecting California on a mostly pin-straight Interstate 5, a familiar ride where I’m normally wishing the time away. Instead, because I was so darn comfortable, I found the ride strangely enjoyable.

The temperature also helped: at an average of 15 C it was perfect for the Venture because that big V-twin pours out a ton of heat. Two large, adjustable wings on either side of the fairing can be used to increase airflow to the rider’s midsection, although with the trade-off of a loud and turbulent cockpit.

The TC’s ergonomics are spacious and neutral. A large, wide windscreen is adjustable in height by means of a toggle on the tank or by navigating to a command on the LED display, while the wings are in reach and easy to adjust by hand.

Additional features – such as heated grips and seat, radio, smartphone streaming, GPS navigation and the usual array of mechanical readouts – can be accessed through the display’s screen via a digital pad (imagine directional buttons on a TV remote) on the left switch housing. Unfortunately, this cluster is a sore point because the buttons are almost flush and too small to activate without visual reference.

At night, the navigation buttons become useless because of this lack of tactile feedback and, with no backlight, you can’t even find them.

I left the superhighway for good in Northern California, where I would stay for a few days and use the Venture as an all-rounder.

In the everyday world of running around, the TC is easy enough to manage, its heft at walking speeds neutralized by Yamaha’s easy-to-engage Sure Park system, which uses an electric motor to assist as a reverse gear. Another asset in the stop-and-go of daily life is the bike’s superlow seat height of 695 mm, which allowed my legs to sprawl long, like buttresses propping up a cathedral.

But by far the Venture’s greatest asset for errand running – as well as long-distance touring – is the immensity of its cargo space. The two top-loading side cases are deep, while the trunk is truly enormous, swallowing two full-faced helmets with room to spare. Latches are push-lock style and can be finicky to operate, especially if you’re packing a full load that might interfere with the internal catches.

There are six cubbies on the bike, two in the upper fairing that can be accessed while underway, two in the lower fairing and two more on either side of the passenger backrest.

And speaking of passenger-friendly equipment, the pillion also offers your co-pilot private controls for the rear seat heater and, more impressive, a set of Dual Zone audio controls that allow the rider and passenger to select different audio sources and even hold private phone calls via Bluetooth or hardwired connections.

I was lucky enough to have my adult daughter join me for an afternoon of back-road touring on the Venture and she, a veteran of travel as my passenger, reported the Venture is the most comfortable motorcycle on which she’s crewed. Her only complaint is that the passenger audio controls, like the rider’s, are too small and too closely spaced to operate with gloves and, moreover, the passenger can’t even see the control panel for reference. 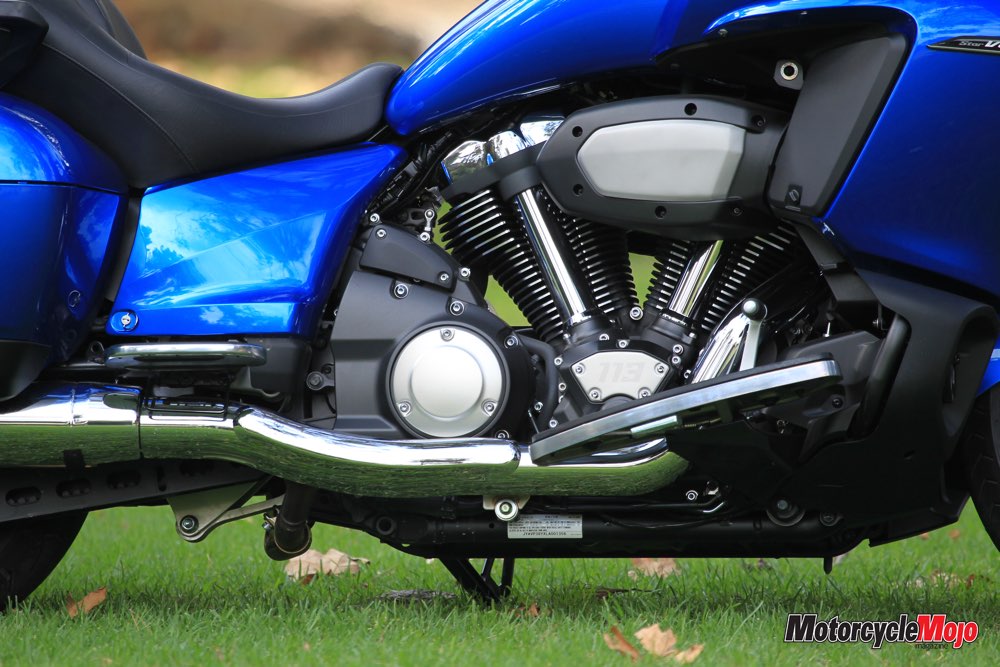 I spent my last two days aboard the Venture lacing together the high mountain passes of the Sierras.

There, in the tight, steep, high-altitude twisties, the Venture felt less at home than it did on the freeway. The bike does ride lighter than its weight and steers nimbly enough, but the soft suspension that feels so Cadillac-cushy on the freeway causes the big bike to feel a little ungainly during aggressive riding. Dialing in preload on the linkage-type rear shock via an adjuster accessed behind the right side cover helps a little, but not enough.

Lever pull, despite its assist and slipper clutch, is on the heavy side and the bike’s transmission shifts through its low gears with a mechanical clank – very in keeping with U.S.-style heavy cruisers. Yamaha’s omission of a similarly evocative heel shifter on the TC is a shame.

A unified ABS-equipped, triple-disc braking system does an admirable job of shedding speed in all conditions. The system links the front and rear brakes, although not in set proportions; instead sensors electronically adjust braking force and ratios in real time.

If your thing is spirited touring, all U.S.-style V-twin options pale in comparison to the luxury tourers available from BMW and Honda. These have electronically adjustable suspension, traction control and ABS, quick-shift systems, multiple riding modes and much deeper infotainment suites that are accessed by brighter, clearer TFT-style displays.

Whew! That’s a lot of good stuff to give up for the sake of acceptance into the U.S. V-twin biker scene, which of course is not begging to admit Japanese versions of its heritage bikes.

The Venture offers two riding modes – Tour and Sport – although they’re purely adjustments in the bike’s ride-by-wire throttle response: the former for smooth action and the latter for sharper acceleration.

Luxury in the form of a travel bike means comfort and convenience are factored in ahead of mechanical performance. And while the TC offers comfort in spades, the bike falls short on convenience due to its behind-the-times e-technology and archaic infotainment package.

If I pulled a Rip Van Winkle and woke up from a 10-year nap, I could ride off on the brand-new Venture and not know I’d slept.

Really, though. Despite multiple pep talks from Yamaha’s marketing department, I still can’t understand why the company went with a design that feels old-fashioned when sales figures confirm the nostalgic V-twin buyer is either retiring from two wheels or migrating away from cruiser-style bikes.

Riders today are demanding more versatility and performance from their machines, hence the surge in adventure touring bike sales. And want more value for their dollar.

And this bike, like the U.S.-made bikes it emulates, costs a lot of dollars. So, if your thing is U.S.-style V-twin cruisers, despite their limited performance, why lay down comparable cash for a Japanese version?

You see where I’m going here. If you absolutely need a nostalgic U.S.-style V-twin luxury touring cruiser, you’d probably buy a U.S.-made V-twin touring cruiser. And if you want more for your money in the way of technology, convenience and performance, you’ll be drawn to sportier luxe options from BMW and Honda.

On the upside, the Yamaha does offer bold, stand-alone looks and rides like a piece of heaven on a straight highway. It certainly took me where I needed to go. And in that state of transcendence that’s only available on two wheels and a long, open stretch of road, the Transcontinental did the trick.