What else do you do with four kilometres of perfectly smooth aircraft landing strip and a seriously fast motorcycle? You attempt to break a land speed record, of course.

In the northeast corner of the state of Maine, just outside the small town of Caribou, lies what remains of the Loring Air Force Base. This year marks the 25th anniversary of the closing of the base in 1994. But from 1950 to then the base was a significant component of the U.S. Strategic Air Command. The base was in constant airborne alert with a formidable fleet of B-52s. For a time the base was the largest nuclear weapons and fuel storage facility in the U.S. A community unto itself, Loring Air Force Base employed up to 3,800 military personnel and 1,000 civilians. As America’s closest base to Europe, there were more than 1,700 war plane landings here en route to Desert Storm in the 1990s. Today, the Loring Development Authority works diligently to redevelop the facility as a commerce centre in a region devastated by the military’s withdrawal.

One prominent feature of the aging and forgotten base is the runway. Built by and once the pride of the U.S. Army Corps of Engineers, it remains in pristine condition. The strip is a beast at 3,690 metres long and 90 metres wide and it’s about as smooth today as on the day it was built. Very impressive considering the temperature ranges in the Northeast. Constructed of a flexible bituminous concrete pavement at a thickness of more than two metres deep, the strip was built to take a pounding by the B-52s for decades.

So, what do you do with such a perfect abandoned airstrip? Enter Loring Timing Association (LTA). Last year marked the 10th anniversary of this speed-seeking group of merrymakers. Loring first came on my radar when I was considering setting a land speed record to add to my resumé of danger.

The Bonneville Salt Flats, of course, is the Holy Grail of land speed and my research began there. But a local tuner I know had previously built an engine for Loring and suggested it as a first step for me. Pavement offers a less complicated surface than the Salt Flats, plus Loring is located only a half-day drive from my home in Moncton – 2,700 kilometres closer than Bonneville. 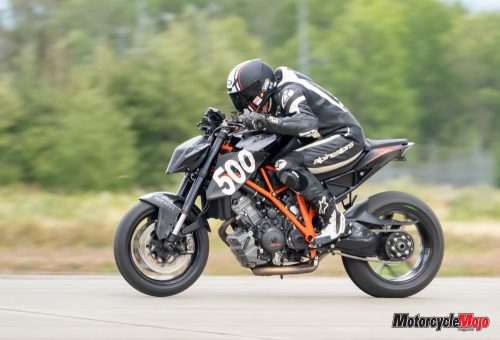 No sense going unless I set a new class record, I figured. So, I look at the existing course records for each class listed on the LTA site (loringtiming.com). Top speed records are listed for cars and motorcycles of all sizes and configurations. I decided that approaching 200 mph would be cool – just to add some edge to my experience. I quickly noted that the production big twin record of 167 mph (270 km/h) seemed unimpressive.

By comparison, I raced a KTM Super Duke 1290 up the Pikes Peak International Hill Climb mountain course in 2017 and hit that speed on the longest straight of the 156-corner course, at an elevation of more than 3,700 metres, on a narrow road, covered in dust, with instant peril on both sides of me. So, my goal of 200 mph should be doable.

As with all one-off events, I don’t need to own a bike; I just need to have a friend with a bike. Facebook message to one Nathan Kavanaugh, local speed demon and owner of a KTM Super Duke 1290. This beast is Nathan’s track bike for the road-racing course at Atlantic Motorsport Park, so the bike was fully track-prepped already. A week before my attempt, I rolled the Duke into my shop and made a few modifications and necessary changes to pass the technical inspection guide posted on the LTA’s website.

The LTA has two events each year, the Maine Event in July and the Harvest Event, which ran from Aug. 29 to Sept. 1 last year. After the basics are covered in the drivers’ meeting, all of the first-time racers were sent to the starting line with their machine for Rookie School. The finer details of course conduct were reviewed in detail and then we all rode down the runway together, stopping at key areas to make sure we’re completely familiar with the site. Once speed is added, there is no margin for error in making decisions.

I’m quite impressed with the LTA officials: organized, well-spoken and with a good sense of fun. Along with their instructions, we got to listen to the crew regaling us with interesting racing stories and historical facts about the base. The mantra is “Safety, Safety, Safety.” And the LTA definitely gives full effort to make a newbie feel welcome and prepared.

As part of the rookies’ procedure, the first two runs limit the top speed: first run at 125 mph; second at 150 mph. The rider or driver simply watches the speedo and backs off or maintains speed once the limit is reached. Blow through that and you’ll get your marching orders: done for the week. 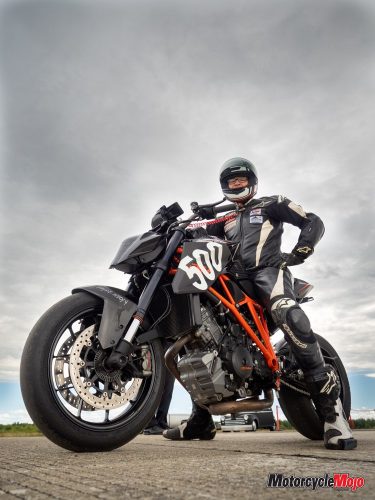 Walking around the pits feels like I’m in a Von Dutch advertisement. Or, at the least, I expect Brando or Dean to walk by in some rebellious manner. Definitely feels counterculture. There are coupes, early rail cars, Camaros and ’Vettes for the car freaks. Bikers can drool over the Nortons, Triumphs, Harleys and assorted Japanese-made bikes. Some machines look vintage at first; but make no mistake: everything has been tooled for speed and the owners are here to set records.

The atmosphere was friendly. I felt that immediately. Similar to how I felt at Pikes Peak and when desert racing in Baja. The racers are here to beat the strip – as opposed to wheel-to-wheel racing, where the focus is on beating rivals. At Pikes Peak, it’s the mountain. In Baja, the empty desert. The adversary is Goliath and that creates an X Games-ish carnival atmosphere in which everyone is supportive of your goal to go for gold.

I tear the tire warmers off the Duke and roll up to wait in line for my turn, advancing forward as one speed freak after another disappeared down the runway. Soon enough I edge up to the starting post and wait for my cue to go given by LTA starter Stacy Robey.

The starting post bears the name of Bill Warner and the number 311. Bill was an iconic figure in the land speed record world. In 2011, he set a world record here of 311 mph in 1.5 miles from a standing start while riding a turbocharged Hayabusa. Unfortunately, Bill was killed here two years later while trying to break 300 mph over a mile: he veered off course due to a suspected mechanical failure while running at
285 mph and died from his injuries.

I note the seriousness of the task at hand and focus on my run. My Duke is set up with GP shift, which means the shifting pattern is opposite to normal. Instead of one down, the rest up, it’s one up and the rest down. Quite important not to screw this up at speed. The bike also had a quick shifter, which was a bonus. Just get the bike launched and the throttle wide open, then leave it pinned while banging gears.

A go signal from Robey and I’m off. Although the strip is a 1.5-mile course, it’s still a drag race. My plan is to get up to full speed as quickly as possible and spend the rest of the distance trying to pretzel myself into the best aerodynamic position on the bike. As a naked bike, the KTM does not benefit from the air streaming a good fairing provides. With that a given, the most benefit I can provide is twofold.

One: tuck in as much as possible so that the least amount of wind hits my body (obviously). Two and less obvious to a newbie: to put the air back together behind me. The shape of the back of all things fast – airplanes, cars, motorcycles – are shaped sloping inward to reduce drag. So, with those two goals in mind, my ideal body position procedure rolls out like this:

After initial launch, I bring my helmet and chin down to rest on the fuel tank. Out of the very top of my shield, I can see the tachometer and by splitting my vision I keep an eye on the runway. My left hand creeps down to grab the upper fork like a mile dirt tracker. Keeping my legs tucked in tight with my toes on the pegs, I move my butt up and back onto the higher pillion seat. Finally, I push my body rearward, sliding my chin along the tank and arching my back as much as possible, giving the air a path to put itself back together again.

The Duke gets up to near full speed in less than half a mile, so from this point on I’m doing a high-speed ballet with the wind.

The specs of the KTM show that the big twin makes peak horsepower at 9,100 rpm. I lock part of my vision on the tachometer and bang a new gear every time the reading hits the mark for six gears. I keep the traction control on to help tame the beast off the line, as the monster torque likes to spin rears and lift fronts. The LCD speedo is digital and watching the numbers scroll up like a fat man stepping on a scale is entertaining.

Each run provides a chance to set two records – one at a mile and one at 1.5 miles. I note the one-mile flags whiz by as I keep trying to manoeuvre into the most efficient body position.

There’s no mistaking the end of the 1.5-mile course with its line of chequered flags and strobe lights flashing. No panic to shut things down, as there is still another mile of runway. I slowly back off from full throttle, secure my left hand onto the handlebar and slide myself forward onto the front seat. Then I slowly rise up off the tank, feeling the force of the wind on my body. I glide to the end of the runway and turn left onto the exit road, where I give the LTA official stationed there a thumbs-up to signal all is well.

At the control centre, I receive my official speed record slip: 171.583 mph at a mile and 174.154 mph at 1.5 miles, which set a new production twin
1,350 cc four-stroke class record for both distances on my first run. Great, another addiction! 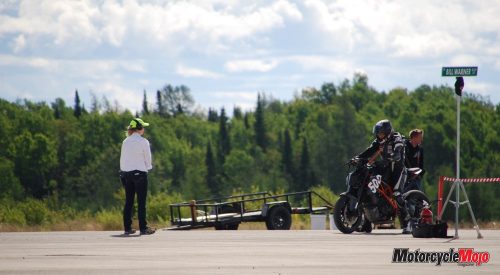 From there the process was just race and repeat, as speedsters can run as often as they want during the four-day event. Every second run, I head back to my pit and make some adjustments to try to improve: tire pressure, race gas, fork position, airbox mods, organic chocolate – anything. In the end, that first run was my best over the three days I was there. There was a 5-mph side wind on that run and, unfortunately, the weather conditions just kept getting more unfavourable. For Sunday, the outlook looked even worse, so the race officials decided late on Saturday that the final day would be cancelled. I believe that the Super Duke would be capable of a 180 mph over 1.5 miles with no wind.

And with that, race director Tim Kelly presents me two land speed record official certificates. I load up, bid farewell to the cult and head off-base.

I stopped for a bite at a café down the road. The glass salt shaker on the table catches my eye.