With point-and-shoot accuracy, Triumph’s newest hooligan bike excels on the street and the track

The Triumph Street Triple is a highly desirable naked bike, seemingly incapable of doing much wrong. It’s closely based on the Triumph Daytona supersport, so it’s quite competent on a racetrack. It’s nimble and, being a naked bike, its taller, wider handlebar places you in a more relaxed riding position, making the bike a great everyday street bike. It has a free-revving inline-triple that has the bountiful torque delivery of a V-twin down low, yet the engine pulls like an inline-four up top. And it produces an unmistakably appealing triple-cylinder drone that makes you grin every time you hit the start button.

The Street Triple got a complete makeover in 2017, when it lost a few kilos and its engine got a larger bore and longer stroke (78 x 53.4 mm versus 74 x 52.3 mm) that bumped displacement from 675 to 765 cc, among a few other changes. Three years into its life cycle, the bike was refreshed with a new look, revised engine mapping and some new electronics.

I went to Cartagena, Spain, to experience the refreshed 2020 Triumph Street Triple RS in the two environments in which it excels: on the road and on the track.

It’s All About Torque 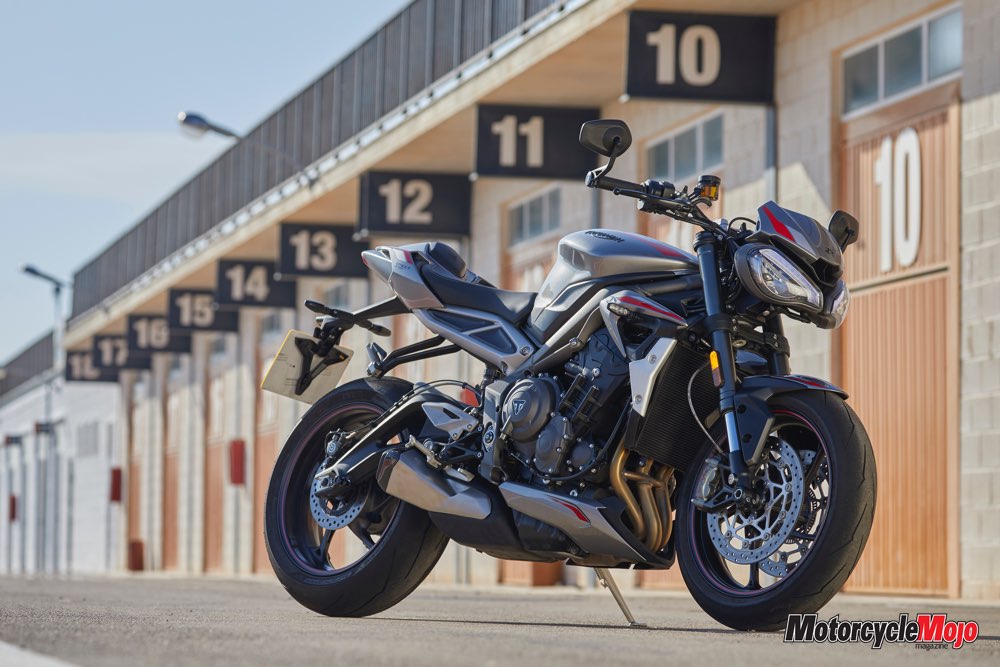 While maximum horsepower on the new RS is the same as on the previous bike, at 121 hp, peak torque is up by 9 per cent to 58.3 ft-lb. This change places the meatiest part of the torque between 6,000 and 10,000 rpm, thus enhancing power delivery throughout the mid-range on a bike that was pretty strong to begin with. These revised engine characteristics come via a new exhaust system, intake tract and cams.

Styling has been refreshed, and immediately noticeable from the front are the sleeker, more aggressive headlights. They incorporate LED “eyebrows,” which serve as daytime running lights (DRLs) in markets other than Canada. However, here in Canada, where DRLs are not yet approved for motorcycles and headlights must always be turned on, the LEDs are lit in conjunction with the halogen headlights, serving more as ornamental lights – although they no doubt make the bike more visible, day and night.

At the rear, the tailpiece has been modified to include airflow channels, which improve aerodynamics, and the tailpipe is now topped off with a carbon-fibre trim piece. There are two important changes to the electronics: one is the addition of a quick shifter that works when shifting up or down; the other is that the ABS can no longer be turned off – which I’ll get to later. Traction control has four levels of adjustment and it can be turned off, while the ABS has two levels. Ride modes include Rain, Road, Sport, Track, and Rider-Programmable, the last of which is configurable.

While the same, configurable TFT instrument panel returns, it has new display graphics. I preferred the old, larger graphics – mostly because I just can’t see the new, smaller script without my reading glasses. The tachometer is now primarily numeric, with additional symmetric bars extending from the centre as revs pick up, shown either at the top or bottom of the screen, depending on the selected display configuration. On the track, however, the lack of a large tachometer display is an oversight.

A new feature is My Triumph connectivity, which allows the rider to control a Bluetooth-enabled device via the TFT screen and the handlebar switches. A smartphone can access turn-by-turn navigation on the screen or control music when operated with a Bluetooth helmet headset. A unique feature of My Triumph is limited function of a compatible GoPro camera, allowing the rider to operate certain camera functions through the handlebar switches while riding.

As before, the RS is equipped with high-spec chassis components. Showa provides the 41 mm inverted big-piston fork, which is adjustable for compression and rebound damping, and preload. The single rear shock is an Öhlins STX40, which features the same adjustability as the fork. Brembo provides the brakes, which are comprised of a pair of radial M50 four-piston front calipers, a radial master cylinder and a single-piston rear caliper. Pirelli Diablo Supercorsa SP V3 tires provide track-worthy grip.

The Street Triple RS On The Street

We began the day in warm, sunny weather, riding the roads winding through the hills west of Cartagena. It was a short, 90-kilometre ride, though, because the afternoon was reserved for the racetrack. Unlike our weather-beaten Canadian pavement, Spain’s asphalt is nearly flawless. In these conditions, the new Street Triple RS revealed itself to be a real gem.

The RS’s engine is smooth, and pulls in a linear manner, seemingly never running out of breath as the revs pick up. Road mode provided soft throttle response for effortless city riding, while Sport livened it up at a more elevated pace in the twisities. ABS and traction control are also progressively less intrusive in each respective mode, though unless you do something stupid, these features remain pretty much invisible.

The riding position is roomy, although the foot pegs are a bit high for a six-footer like me. There’s a slightly forward reach to the handlebar, and the seat, at 825 mm tall, provides a modest reach to the ground. The suspension is firm, yet compliant, although the smooth roads didn’t really use up much of its travel. And after such a short ride, assessing seat comfort was difficult – 90 clicks is no problem.

Almost Perfect On The Track

With the sun still shining, we arrived at the track around noon, where after switching to Track mode we were allowed two sighting laps before being let loose to ride at our own pace. For me, that’s “as fast as I can go,” which isn’t always the most sensible approach – especially on an unfamiliar machine.

After my first fast lap, while approaching the right-hander following Cartagena’s 610-metre front straight, I got on the brakes late and hard. This had the unexpected result of tripping the ABS, which then continued to cycle as I watched the edge of the racetrack come closer and closer. Staying on the brakes, I shaved off just enough speed to turn in before riding into the gravel trap, and subsequently being known for the remainder of the event as that guy. I adjusted my braking markers to avoid having the ABS kick in again, although it did so on two more occasions with less drama.

Unexpected ABS braking isn’t an issue that’s exclusive to the new RS: I’ve ridden other bikes with ABS on the track and experienced similar situations. However, when a track-specific ride mode is included, the ABS threshold is set very high and is almost invisible. Although the RS’ ABS setting was at its least intrusive in Track mode, the ABS was triggered too easily for an aggressive pace, so further factory tuning may be necessary to optimize the braking for track use. 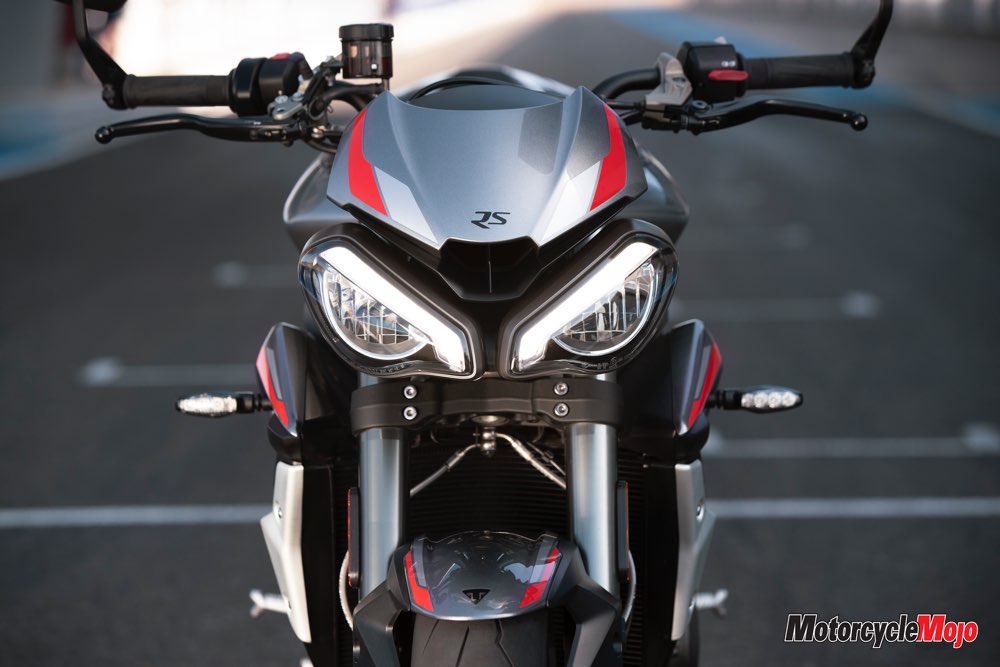 Although the ABS could be turned off on previous models, that is no longer possible because current European regulations prevent manufacturers from allowing a rider to shut it off on bikes not intended for off-road use. The European regulation states: “Disabling the antilock brake system function shall only be allowed when the vehicle is fitted with a ride mode selector that is in an ‘off-road’ or ‘all-terrain’ mode.”

You can probably figure out how to defeat the ABS and cancel it, although if you do so and crash on the track, don’t blame Triumph.

After adjusting my brake markers for less than kamikaze-like corner entries, the bike performed flawlessly on the track. The new RS exhibited excellent stability on the fast sweepers, snapped quickly into turns even while trailing deep on the brakes and its substantial mid-range torque allowed the bike to power out of turns with seat foam-scrunching force.

And the new RS is fast – race-bike fast. The engine seemingly has power no matter what the hard-to-read tachometer displays. Throttle modulation is easily manageable even in Track mode. And for me, the upright riding position is better suited for throwing a bike around a tight racecourse like at Cartagena – or the majority of point-and-shoot racetracks we have in Canada – than a supersport machine. The OEM tires also provided peg-scraping grip, although if I had had more time on the track, I’d have cranked up the front and rear preload to raise the bike and keep the peg feelers from throwing sparks.

Oh, and Triumph does a quick shifter right. It worked flawlessly at the track for up- and downshifts, and it also worked well at lower speeds during the earlier street ride. The shifter enables smooth clutchless gear changes at low speed while maintaining light shifter effort, something I cannot say about any other quick shifter I’ve tried. I usually resort to clutch shifting on the road on other bikes, but I didn’t have to on this one.

Bring Back the Street Triple S 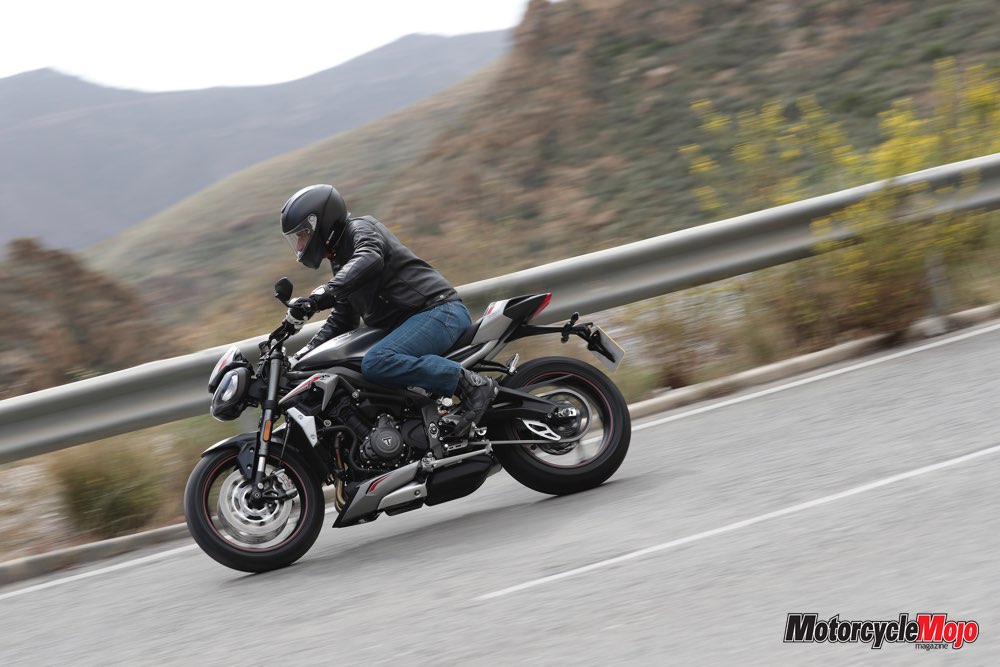 If you want a bike with middleweight supersport performance and handling, but complain that the aggressive riding position of a supersport induces sore wrists, a sore neck and an aching back, then the new Street Triple 765 RS is an ideal alternative. It feels more refined and planted, and has more power than the KTM 790 Duke (although that’s an awesome bike too, and it costs less). The Triumph has an excellent level of fit and finish (just look at one up close), and it has that unmistakable inline-triple drone that really tickles the ears.

The Triumph was a great bike before and, aside from one unavoidable hitch (the non-switchable ABS) and one that could have been avoided (the hard-to-read instruments), the bike has been mostly improved. And the price didn’t budge, which is always a good thing.

If I were to choose just one bike to ride primarily at track days, it would be the Triumph Daytona. The soon to be replaced Daytona 675 had proven to be very well balanced, it had lots of mid-range torque and it didn’t overwhelm you with power the way an open-class supersport does. On the road, however, I classify the Daytona as I do any supersport: simply unbearable for everyday riding or on longer trips due to its extreme riding position.

After having ridden the refreshed Street Triple 765 RS on the road and on the track, it would be my No. 1 choice if I could afford only one motorcycle and my riding included everyday use as well as regular track-day outings.

Until last year you had three Street Triple variations to choose from, each one with higher levels of specifications and features: The base S model, the middle-range R and the high-spec RS. For 2020, at least initially, only the top-ranging RS and R models will be available, and the price is unchanged from the previous RS, at $14,050. The price for the R model is $11,500.

Reintroducing the lower-spec Street Triple S would be nice, though. Its milder tuning (111 hp) and $11,250 price tag would make this naked bike more accessible to riders with less experience. The old S had all the attributes that make it a great step up from something smaller.