Three genuine Italian motorcycle racing icons comprise the latest releases of titles in the catalogue of The Motorcycle Files, the range of ebooks written by Alan Cathcart and published by BRG Multimedia.

Those bikes are the legendary Moto Guzzi V8, the Moto Guzzi Bicilindrica V-twin (from the same factory) and the four-cylinder 350 that was the final Grand Prix racing motorcycle from MV Agusta. 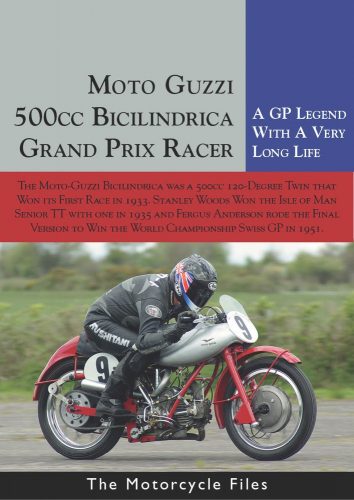 Moto Guzzi was the dominant manufacturer in the 350 cc class of Grand Prix racing in the mid-1950s and the sensational V8 was the weapon the company made in an effort to take the premier 500 cc category from Gilera and MV Agusta. The Moto Guzzi V8 is still the only eight-cylinder motorcycle ever raced, but it had not reached its full potential when the company withdrew from racing after the 1956 season. Although the V8 never won a Grand Prix, its specification alone – not to mention a win in the prestigious Imola Gold Cup and having recorded a speed of 178 mph in the Belgian GP at Spa – was enough to guarantee the bike iconic status.

In contrast, the Moto Guzzi Bicilindrica 500 cc V-twin won the 1935 Isle of Man TT, in the hands of Stanley Woods, and many Grand Prix races after that. In fact, this bike kept on winning over a racing career spanning two full decades. The machine featured in the ebook is the bike in its final form, as when it won the 1953 Spanish Grand Prix.

A machine that truly represented the end of an era – the jewel-like 1976 MV Agusta four-cylinder 350, complete with titanium frame – is covered in the third ebook. Giacomo Agostini rode the Agusta to victory in the Dutch TT at Assen, a feat that suitably closes the book on almost 30 years of highly successful Grand Prix racing activity for the famous Italian marque.

Each ebook in The Motorcycle Files series provides readers with a full history of the subject machine, in-depth technical analysis and track test-riding impressions given by Alan Cathcart. The ebooks are illustrated with rare archive material and superb digital photography, including many shots of the bikes with fairings removed, which provides close-up looks at engines and chassis technology.

All 30 titles in the range are priced at $4.89 each and are available worldwide for download via Amazon.com or the Kindle bookstore.