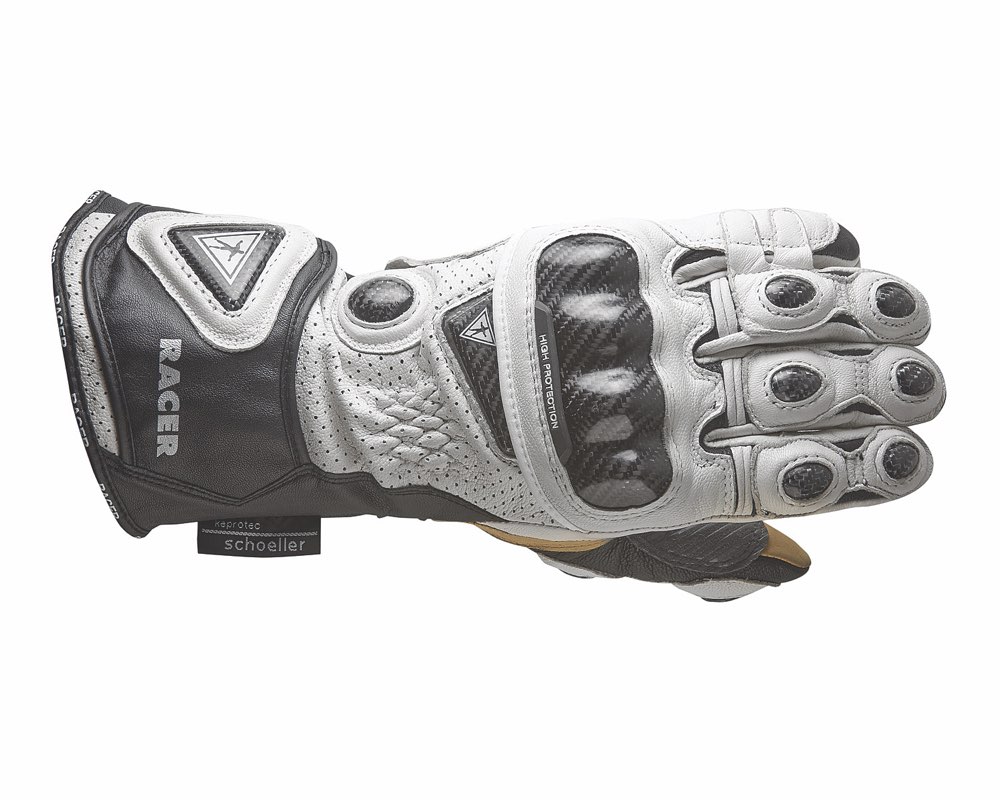 You could make an argument that gloves are the second-most important bit of rider protective apparel. After, of course, the helmet. That’s probably particularly true at low speeds, when injuries are for the most part survivable, but painful. After all, what is one’s first reaction to any fall, motorcycle or otherwise? To put out your hands to break your descent, right? Dropping onto gritty asphalt at even 15 kilometres an hour will turn flesh into hamburger and/or knuckles to dust. Do so with an appropriate glove at even five – or 10! – times that speed and, short of a trapping your hand between handlebar and tarmac, you might get off scar-free.

Besides, gloves do so much more. In the summer, they ward off wind, bugs and the small rocks cagers are always launching at us. The best of multi-purpose gloves ward off rain as well. There are even some gloves that, given enough insulation or artificial heat, can help the true maniac who motorcycles through winter. Yes, even Canadian winters. (I happen to know a fellow V-Strommer, not outwardly crazy, who commutes about 100 kilometres a day through Toronto winters.)

So, here are the best, thoroughly tested gloves for each of those three circumstances, two of which have become such favourites that I am on my second pairs, not having found a superior replacement over their lifespans: 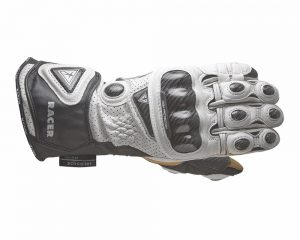 The best gloves you’ve never heard of. What sets the Racers apart from other armoured “racing” handwear is their incredible comfort. Right out of the box – bag, actually – they are supple beyond belief, almost as if the manufacturer has hired a whole bunch of bikers to put some kilometres on each set before shipping them out. These gloves are, without doubt, the best-fitting motorcycle gloves I have worn in 48 years of motorcycling. The glove’s uppers are made of smooth, pliable cowhide; the palm, of even softer, more luxurious kangaroo leather. “Fitting like a glove” may be a metaphor, but in the case of Racer’s High Racers, it is simple fact.

These gloves would also appear – having only crashed in them once, I cannot be totally unequivocal – safe, there being not less than 10 individual pieces of carbon fibre on each glove: two each on three largest fingers, two big pieces covering the knuckles, a small piece on the back of the hand and yet one more on the gauntlet to make sure that the entire outside of the Racer slides easily. Each glove also has two plastic Knox SPS sliders built into the heel of each palm. Having fallen, palms first, onto the aforementioned gritty pavement, I can attest that the sliders prevent gloves from catching and rending wrist bones asunder.

Boy racers could, I suppose, complain about the High Racer’s comparatively staid look, there being a definite absence of Day-Glo-like colours and/or shiny metal knuckle protectors. Recently Motorcycle Innovations became the Canadian Distributor of Racer Gloves and this particular glove retails on the website, motorcycleinnovations.ca at a price of $299. The site also offers other styles ranging from $99. – $379. and the sizing chart is accurate enough to make sourcing online relatively safe. 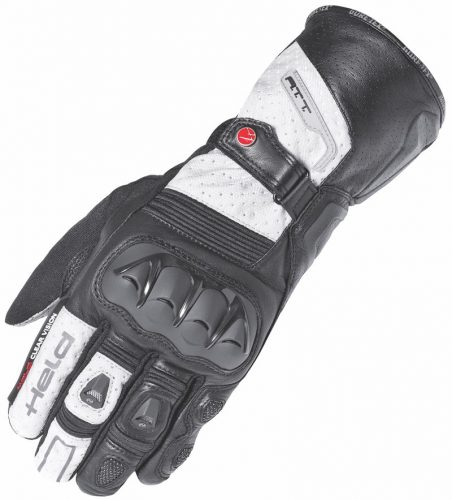 Yes, another set for which I could find no better choice, and I am on my second set of Held Air N Drys. (I accidently melted a portion of my first set on an exhaust pipe.)

One of those mythical unicorns that promise sport-glove comfort and feel with complete water resistance, the Helds really are the most versatile gloves I have tested. On a hot sunny day, they are a model of cool comfort; their palms, like the Racer’s, constructed of pliable kangaroo. There is even added palm perforation to let in a little cooling air. The holes work: the Helds render less sweaty a palm on hot days than many lightweight summer mitts.

But – and here is the magic – come serious deluge, the multifaceted Helds are all but completely waterproof. Indeed, in more than five years of use, my first pair soaked through only once, and that was during a four-hour monsoon on a naked bike. The trick is that the Helds are actually two gloves in one. More accurately, there are two chambers inside the glove with a flexible Gore-Tex liner separating them. Put on the Helds with the Gore-Tex facing your knuckles and your palms are coddled by the soft, pliant kangaroo leather I mentioned. Slip your hands in above the intermediate layer and they’re protected in a waterproof Gore-Tex cocoon.

Many companies have tried this multilayer – perhaps better described as “multiglove” – approach, but Held’s version is the best I have tried. Throw in some venting on the fingers, a visor wipe on your index finger and 3M Scotchlite reflectors and the gloves are even more complete. Even the protection is fairly robust – especially for something not designed for the track: the knuckles protected by a tough-looking hunk of curved plastic and the lower palm, by SuperFabric, which is constructed of tiny ceramic plates thermally welded onto the underlying fabric. This feature offers decent abrasion resistance without the need for bulky plastics like the Knox sliders used by Racer.

Indeed, the only downside I can come up with – other than the Helds can’t fend off the heat from a glowing red downpipe – is the cost. I sourced mine from GP Bikes and they list for $338, although a spring deal advertised them for $307. Either way, quality and versatility don’t come cheap. Nonetheless, if I were going to buy only one glove for all my street riding, it would be the Held Air N Drys.
Keis G501
As I get older – and have more years of motorcycling in my rearview than ahead of me – I’ve been trying to extend the riding season a little. Which in Canada means battling Old Man Winter. Or at least chilly Mr. Fall. I’ve tried thick insulated gloves, but, as anyone who’s tried manipulating motorcycle controls with what feel like snowmobile gloves can attest, wearing the thick gloves is not a comfortable feeling. So, like so many motorcyclists looking to extend the riding season, I’ve moved on to electricity – as in heated gloves.

Since I am relatively new to this kind of riding, I’ve tested only three pairs. The first set were battery-powered and, well, like all battery-powered products, they had limited battery life – about three hours, at best. They were fairly warm and well constructed, but I don’t recommend any battery-powered gloves for anything other than urban commutes; they are useless for serious touring. 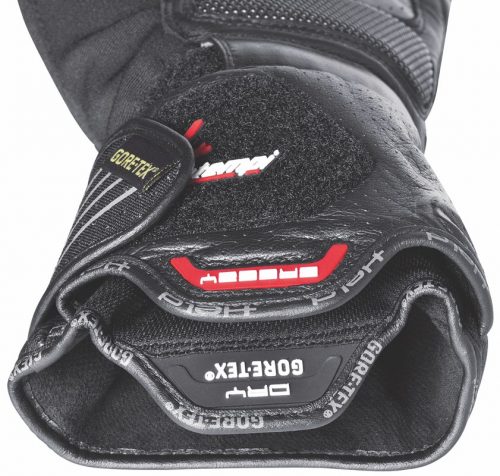 The second set I tried were connected right to the battery on my bike and thus provided generous heat for as long as I wanted. These gloves, made by Venture Heat, also had a built-in, three-position push-button heat controller on each glove. Most convenient. Unfortunately, sizes were very odd: the thumbs were abnormally short and, no, I am not particularly misshapen – and they weren’t very waterproof, so much so that eventually they lost some of their insulating ability and wearing the gloves felt like the heated electric wires were pressing right against my skin. I also have a Venture heated vest, which I love. But I can’t recommend Venture’s gloves.

Instead, I suggest you buy some Keis G501s. Not quite as warm (but still plenty hot), they are better fitting and far more waterproof, and their heat is much more evenly distributed. Like the Venture Heats, the G501s have built-in illuminated three-position switches as well as sturdy carbon-fibre knuckle guards. There’s also a double layer of leather on the lower palms, although not as protective as the two other gloves mentioned here. That said, heated gloves in general are not designed with as much protection as summer mitts. The best thing about the G501s, however, is how comfortable they are. Unlike all winter gloves – and most electric-powered versions (the Keis G501s plug in) – the G501s are light and comfortable enough to wear on not-so-cold days. They’re my go-to winter gloves now. In fact, you could say, now that I have my winter gloves covered, I have a complete set of motorcycling handwear.

I bought my Keis G501s from angel-wings.ca for $338, but that distributor is no longer in business. You may have to order elsewhere online. Keis’ size charts are accurate.