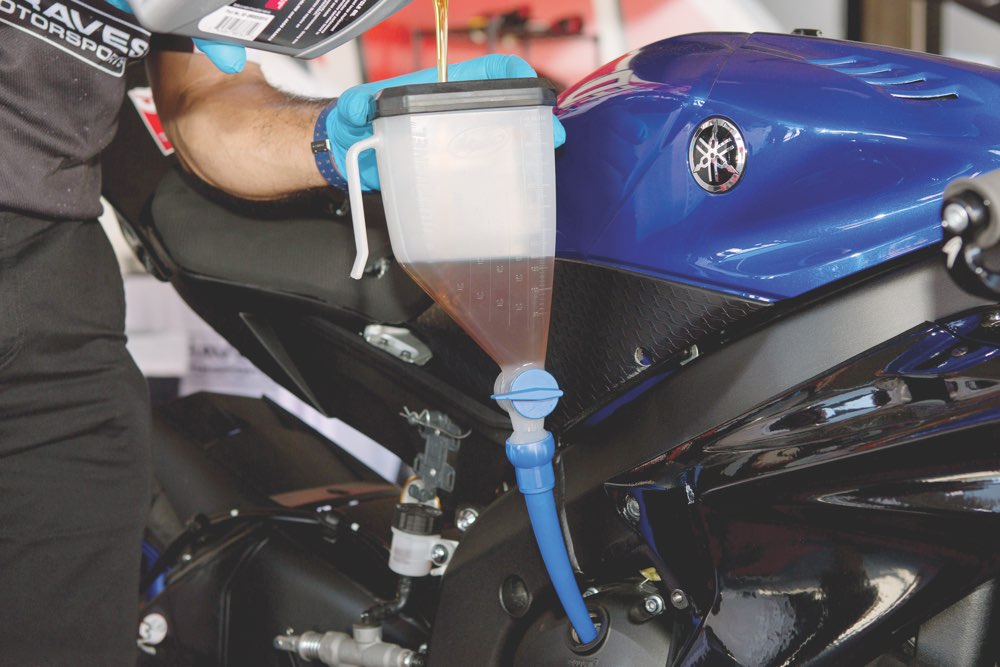 Changing your oil – hell, anything involved with lubricating your motorcycle – is an inordinately messy job. No matter how hard you try, there’s always something sticky to wipe up afterward.

And that’s if you’re at all handy. If you’re as ham-handed as I can be – my significant other insists that I not help with cleaning; that’s how klutzy I am – said pool of stickiness can become large enough to be classified as an environmental disaster.

Over the years, I have tried all manner of tricks and trinkets to reduce the deluge. Here are the few that made the cut – my go-to tools for garage harm reduction, if you will. 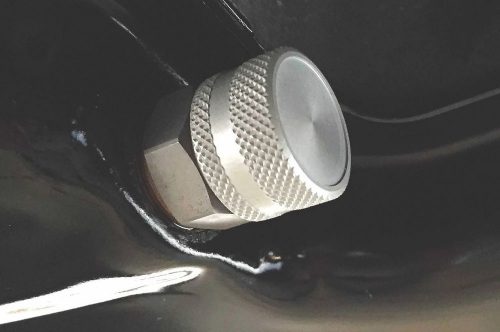 This is the most important item in my oil maintenance regimen. All of my last four bikes having had their oil drain plugs swapped out for a Stahlbus Oil Drain Valve. Installation is simple: remove your old drain plug, screw in the Stahlbus valve (using the provided new washer, of course), torque it to manufacturer’s recommended tightness and und fertig ist der Lack – that’s the informal equivalent of “Bob’s your uncle” in German, says HarperCollins – you’ll never have a messy oil change again.

That’s because the plug you just screwed into your sump has a one-way check-ball valve. The weight of the oil – aided by a stiff little spring – keeps the ball in its seat and your oil in the engine. When you need to change the oil, a neat little attachment – push and twist 90 degrees – overcomes the spring pressure and, faster than you can say Bob in either language, your warm engine oil will begin pouring out – in a controlled manner – from the bottom of your bike. When you’re done, twist and release, then screw in the little machined cap that prevents dust and debris interfering with the check valve and you’re done. Even I don’t spill… much.

The gadget works exactly as advertised. It has the added benefit that you will never strip another drain plug again. It’s the first farkle I perform on any new motorcycle. Stahlbus Oil Drain Valves are available in a plethora of different sizes/thread pitches and cost about US$50 via stahlbus-us.com. 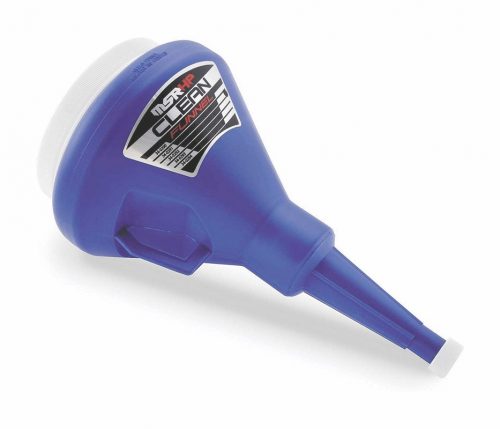 Of course, once you have – again, without spillage – successfully removed your engine’s oil, you now have to replace it without going all Exxon Valdez. To minimize my klutziness, I actually have two funnels. They attack different aspects of my gracelessness and I still haven’t figured out which is more effective for me.

Motion Pro’s Pro Funnel keeps things clean while you’re filling the crankcase. Most important is the circular shut-off valve, which means that once you’re finished dumping fresh Amsoil into the filler hole, you can close the funnel so the dregs don’t slip onto the floor. Simple, yet effective. The Pro Funnel then has a magnet so you can attach it to the side of your toolbox. Handy!

The Pro Funnel has only two faults. The first is that its top cap is diabolically difficult to seal. For some reason, Motion Pro decided that its funnel needed a two-piece top, and inevitably the two pieces don’t get along. Anytime I’ve made a mess with the Pro Funnel – and you know I have, right? – it’s been long after the oil change was finished. Second, the Pro Funnel costs $49.99, which is a whole heck of a lot for a piece of plastic.

MSR’s Clean Funnel – $13.52 from fortnine.ca is nowhere near as tricked out. No integrated shut-off valve; no two-piece top. This funnel is not quite as convenient as the Motion Pro when you’re pouring in the oil.
However, the MSR funnel has screw-on top and, more important, bottom covers. In other words, once said oil change is over, there is virtually no possibility for further Deepwater Horizon disasters. Yes, you do have to wait longer for all the oil to drain from the funnel – again, no built-in shutoff valve – but once that’s done, the environment is safe from your klutziness. 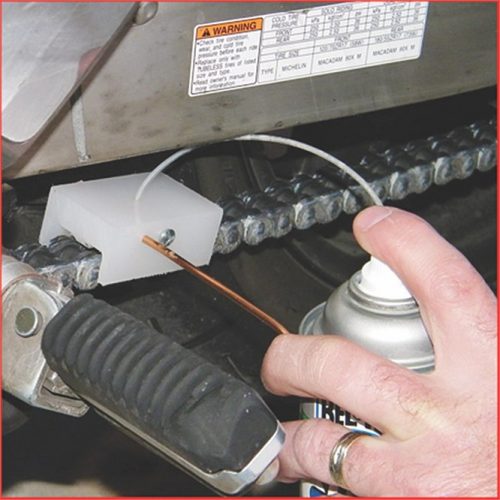 Of course, there are more ways to spill lubricating fluid onto a pristine floor than a clumsy oil change. If you’re as unco-ordinated as I am, even a simple chain lube can see Greenpeace called in to “Dawn” the local waterfowl. And what doesn’t end on my floor almost certainly muddies up difficult-to-clean V-Strom spoked wheels.

Enter the Grease Ninja. Essentially a block of plastic machined to fit your specific chain size, there’s a groove for both sets of link plates and a channel through the block that aims oil directly onto said link plates. Simply hook up your chain lube’s plastic hose, lay the Grease Ninja atop the lower strand of your chain, then spray.

Oh, a little foamed fluid will drop from the chain, but nowhere near as much as would if you didn’t use the Grease Ninja. Besides, the lube is directed right where it’s needed rather than sprayed all over sprocket and the swingarm like a spreading plague. Too cool!

There are two downsides to the Grease Ninja, however. The first is that there’s a little holder doohickey that connects your spray can to the Ninja. It’s a good idea, but it is a little finicky. Of course, what are you expecting for 15 bucks? Second, because the oil spray is best directed precisely, you need different Grease Ninjas for different-sized chains. My old CB1100R’s 630 links require a different block than the V-Strom’s 525. But again, the gadget costs only US$15 via greaseninja.com. Even the need for two is cheap compared with the grief of cleaning a dirty bike and shop floor.
My garage floor, at least.