Which of these better than ever bikes is best?

Motojournalism isn’t all it’s cracked up to be. Sure, trying out all the latest machines is cool, but far more time is spent in front of a computer parsing each bike’s pros and cons. At the worse of times, the machine you just tested sucks, but you don’t get to review it honestly because the magazine you write for is too afraid of losing ad dollars.

That’s why I love writing for Mojo. I’ve always been encouraged to tell it exactly like it is, and if you caught my most recent two reviews, you know I’m not afraid to tear down a bike if it doesn’t make the grade.

And then there are other times when a bike is so good the challenge is in not sounding like you’re writing a sales pitch. Enter BMW’s new R1250 R and RS. And my attempt at not gushing.

Rarely do I test two machines almost identical in their mechanics yet worlds apart in character and intention. BMW’s new R1250RS is a true sport machine with a smattering of touring amenities; its sibling, the Roadster, is a dynamic do-it-all naked standard you wouldn’t guess was a twin to the RS save for the massive cylinder heads jutting from each side.

Both bikes are a joy to ride, in large part due to profound changes in BMW’s famous flat-twin engine – specifically, new camshaft technology that not only allows for increased power throughout the rev band, but also the tight, even distribution of that energy. The unique level of elasticity is achieved by utilizing a camshaft with two separate cam pairs to optimize and fuse power delivery. When you’re using low revs, partial-load cam profiles reduce valve lift and close any gaps in power delivery. Throw open the throttle and the cam shifts to full-load profiles for maximum power development.

This new power, a claimed 105 ft-lb of torque and 136 hp is rich and oh so smooth – a discernible upgrade from the previous 1,200 cc boxer and well matched to the R-package’s steady, proven chassis, which is a two-part frame that mediates road surfaces via an upside-down 45 mm inverted fork up front and BMW’s unique shaft-damping Paralever and single-sided swingarm in the rear.

Both machines connect to the pavement cohesively, tracking a reliable line through the roughest of corners. The RS, with its sporty cowling and more aggressive riding position, makes you feel at home playing fighter jet pilot, while the straight-up ergos of the Roadster version (no fairing) makes short work of dissecting urban environments. Yet, both will do the other’s job just as readily.

Guiding either bike is effortless, with the RS steering feeling a tad quicker, thanks to a tighter handlebar arrangement and shorter trail (111 mm as opposed to the R’s 126 mm). Dual 320 mm
floating discs with four-piston radial calipers up front and a single 276 mm disc with dual-piston floating caliper make quick work of stopping, while the switchable ABS works as intended.

Three preload settings are available on both bikes: Solo Rider; Solo Rider With Luggage; and Two-Up, the latter two settings reminding you theses rockets are intended to travel. Three original equipment seats are also available at delivery, the lowest being just 760 mm, which makes the R and RS very approachable for confident newbies and shorter riders. 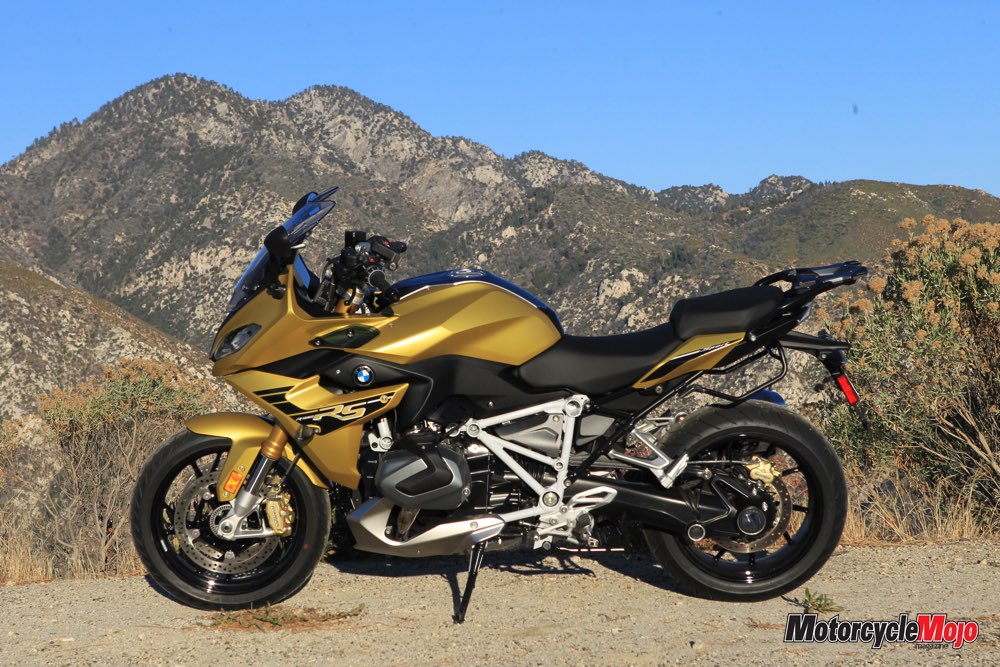 Although announced as 2019 models, the RS and R didn’t make it to North America until January and were released as 2020 editions. And while the designations aren’t new to the global market, both bikes have received some efficiency upgrades in addition the new Shift Cam engine.

The RS has a newly designed fairing that houses full LED twin headlights as standard equipment, while the R sports BMW’s new Headlight Pro, a smart headlight that senses daylight and automatically switches from the main bulb to daytime LED. Both bikes also have BMW’s superbrilliant 6.5 TFT with Bluetooth connectivity to smartphones.

If the new boxer is the centrepiece of these bikes, the bright TFT is their crown jewel. The display is supereasy to read and also to access via BMW’s intuitive thumbwheel multi-controller located beside the left handlebar grip, which makes child’s play of scrolling through and selecting amenities and performance adjustments.

Switching between the bikes’ modes and settings conjures discernible differences in both road feedback and bike character. During my times testing the R and RS in a multitude of environments (urban, superhighway, tight twisties), I found the Road setting universally appropriate, although it was amusing to have Dynamic Pro on hand for sharper throttle play.

The addition of smartphone connectivity, including written turn-by-turn navigation (not a map) is a good move.

Both bikes in their fully dressed form come with a hard-wired docking cradle intended to house BMW’s Navigator VI GPS, an expensive add-on that also requires a monthly fee for updates. The cradle is a bit unsightly sans the GPS unit and, unfortunately, is not an easy item to uninstall.

The R and RS I tested came with a raft of goodies so enticing that few riders will want less. Stock, these bikes come with essentials: basic ABS (switchable), two ride modes (Rain and Road), basic traction control, BMW’s switchable automatic stability control (so the bike will wheelie only when you want it to) and hill start control. You also get the super-readable TFT display and onboard computer, an accessory socket and, on the RS, a two-height adjustable windscreen.

And don’t forget convenience options such as keyless ride, saddlebag mounts, tail rack and centre stand, or the plethora of paint choices and “style” packages that will add coin to your purchase. The Austin Yellow RS shown here is an example of the Style Sport package, while the very elegant R featured in Sparkling Bronze Metallic is decked out in BMW’s new but pricey Project 719 trim package, which includes billet accessories and a beautiful two-tone pleather seat.

In sum, don’t fall under the spell of the reasonable base prices BMW markets for these models. If you’re like most riders, you’ll want to bring some extra moneybags to the table, knowing you’ll be drawn moth-to-flame to all the cool technology, creature comforts and classy bling. 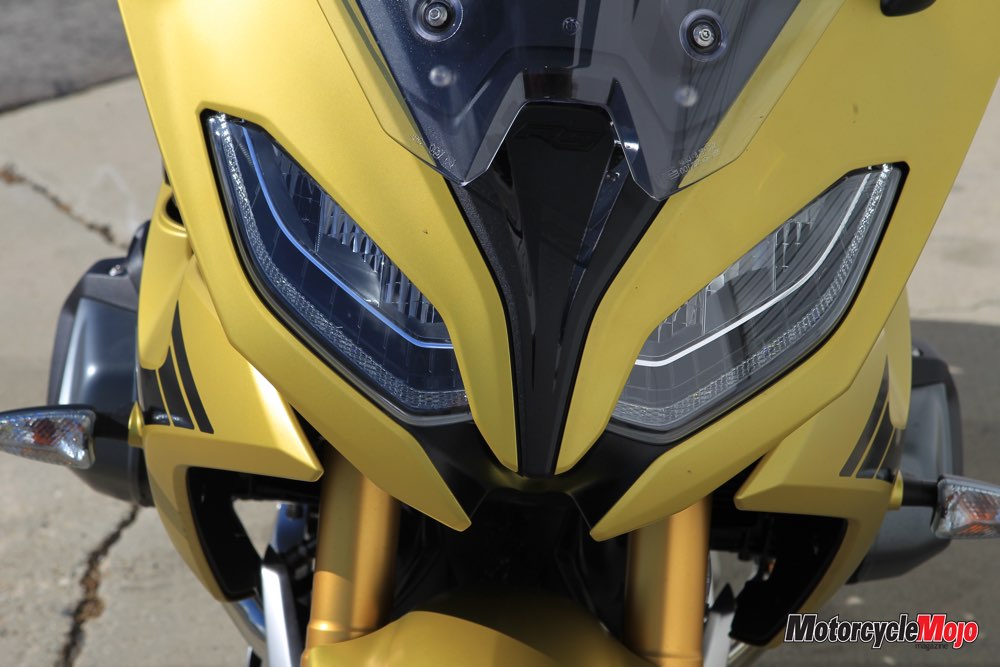 By all counts, the RS is a dedicated sport machine, although one marketed to be touring-friendly. Certainly, this bike is comfortable enough to ride for multiple days, as I did using it as my only means of transportation for several days. The RS also is sexy with its “let’s race” looks, although it’s not nearly as worthy of track-day bliss as something like its own sharper-edged S1000RR sibling.

That said, the RS a great middle ground between owning a dedicated sport bike or a bona fide sport tourer like BMW’s halo boxer, the R1250RT.

Having picked up the sporty RS from BMW first, I was enjoying it so much I was reluctant to swap it for the Roadster. Then I got on the R and kicked myself for not making the trade sooner.

Both bikes are that good, although in surprisingly different ways. Yes, the same delicious surge of power, the delightful snick-snick of the quick shifter, the pleasing responsiveness, cutting-edge electronics and infallible fit-and-finish, yet the R and RS were completely different in outward form and rider feel.

This contrast is mostly sleight of hand, of course: just ergos and outward appearance. Yet, for a buyer, the difference between the two models is a huge leap that comes down to vanity even more than intentions.

And the Favourite Is?

Personally, I would choose the more classic-styled Roadster with its all-rounder ergos and fierce posture. The R is the kind of ripsnorter that makes everyday riding more fun. Heck, just looking at its burly profile raises my heart rate.

Not to dismiss the RS. If I were looking for a mannerly sport mount that was comfortable for more than buddy-chasing, the RS would be on my radar. However, despite this model’s branding and smattering of travel amenities (features also available on the R), I find the RS lacking in touring chops and also bit bland in the styling department.

If I were shopping for a twin-cylinder
sport tourer and money wasn’t my main concern, I’d jump on the R1250RT, a test bike I put 13,000 contented touring kilometres on last summer. And if you don’t mind having more power and even silkier smoothness, my opinion is that BMW’s K1600GT is the best sport tourer on the market today.

Too Good, Yet True 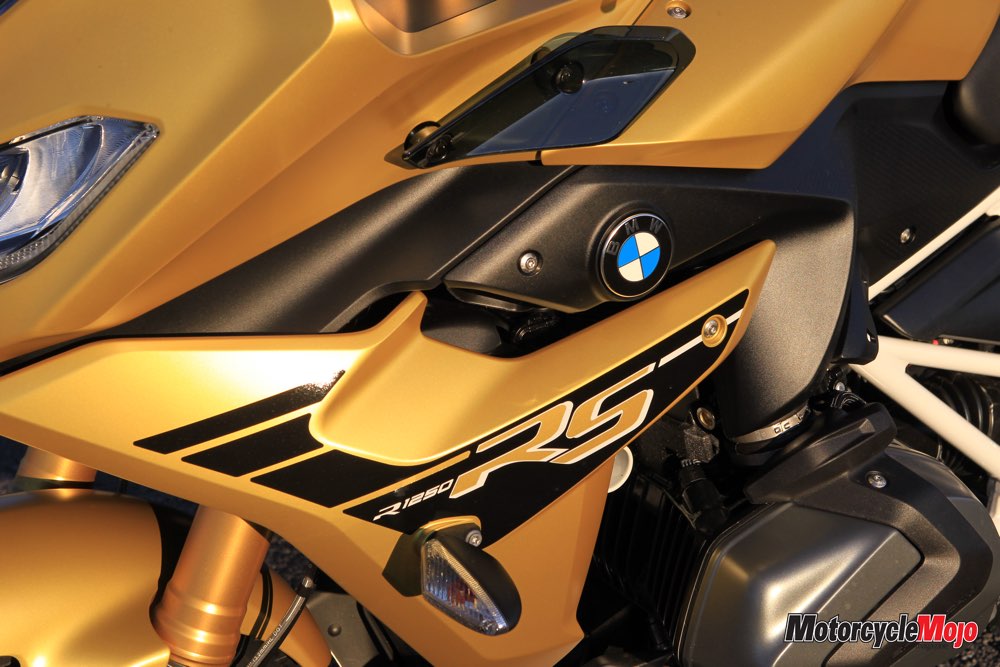 Back in the late 1980s, when I began testing motorcycles for a living, the challenge was often making excuses for a new model’s inefficiencies by playing up its potential fun factor. BMWs in particular were notorious for breaking down mid-test, usually because of the electrical gremlins that haunted the brand back in those days.

Much has changed. Both the RS and R are the calling cards of new era in motorcycling; a fast-approaching time when the machines are so advanced and well-finished, journalists will need to extrapolate wildly to unearth any inadequacies.

And while that may make my job as a writer more difficult (how to add weight when it’s all warm fuzzies?), riding the machines sure is more fun than ever.