Yamaha’s race-proven YZF-R3, now shorn of its bodywork, has been stripped down to become an entry-level street fighter.

I’ve always believed that when a motorcycle manufacturer takes a sport bike, strips off the fairing and alters the riding position for one that is easier on a rider’s body, the result is a much better motorcycle. The resulting naked bike retains the agility of the sport bike, but is tailored to accommodate a much broader range of rider. With that in mind, Yamaha’s designers took the popular YZF-R3 and converted it into the all-new MT-03.

“Converted the YZF-R3 into the MT-03” is a rather simplified statement, but for Yamaha, the redesign was a cost-effective way to add a new model to its lineup that is easily accessible and affordable for new riders. The new MT-03’s design also is good because the R3 has a proven track record, as seen by its dominance in the Lightweight Sport Bike road race championship, which the model was ridden by the championship’s winner in two consecutive seasons. With that kind of pedigree, the MT-03 was assured a solid basis on which to begin. 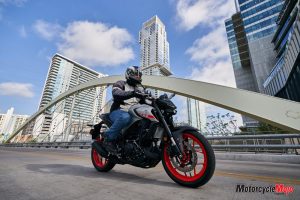 Aside from the pared-down bodywork, the main differences between the R3 and MT include a more street-friendly riding position and a softer fork. The handlebar, which is now a tubular-steel item instead of a set of clip-ons, is 39 mm taller and moved 19 mm more rearward. The foot pegs’ position hasn’t been moved, and, while the their location means their position is a bit cramped for a six-foot tall rider, there’s ample legroom for shorter riders. Seat height, at 780 mm, is also accommodating for shorter riders.

A tidy headlight nacelle and a new gas tank and side panels comprise the bodywork. The LCD instrument panel is the same as on the R3, and is easy to read. It includes, among other things, a gear-position indicator, as well as a convenient, rider-resettable oil change meter, which keeps track of mileage between oil changes. The meter also flashes “oil” in the dash at the initial 1,000 km, and then at every 5,000 km after that, to remind the rider that an oil change is recommended at that mileage. A programmable shift light is also standard, which can come in handy for a beginner rider who is still grappling with gear changes. LED lighting is standard, including LED turn signals, which are something the R3 – or any other bike in the MT-03’s class – lacks. However, the turn signals are Spartan in design, with only a single flashing LED that makes them a hard to see in daylight.

The 37 mm inverted fork is sprung lighter than on the R3, mainly due to the absence of a fairing and its mounting hardware and the altered riding position, which places less of the rider’s weight over the front end of the bike. The MT-03’s standard tires are the same Dunlop GPR300s as is on the R3, and those tires provide confidence-inspiring feedback and grip. A beginner can brake confidently knowing that ABS is standard.

Despite the MT-03’s manageable dimensions, the bike looks and feels like a full-size motorcycle, but without a big bike’s intimidating mass. Claimed wet weight is a scant 168 kg, including 14 litres of fuel when the tank is full, which is somehow a kilo heavier than the R3.

The MT-03’s 321 cc parallel twin has identical specs and EFI management as the R3 does. Yamaha Canada does not publish power numbers, but Yamaha Europe claims 41 hp at the crankshaft for the MT, which is unchanged from the R3. A comparison can be made with a few of the MT-03’s competitors, as rear-wheel numbers have been recorded on the CSBK dyno. According to the dyno, a stock R3 makes about 40 hp at the rear wheel; a Ninja 400’s on the same dyno is about 45 hp; and a Honda CBR300R’s is about 32. Those numbers transfer unchanged to each of those last two machines’ naked-bike equivalents — the Z400 and CB300R, respectively. In addition, KTM’s claimed crankshaft output for the 390 Duke is 43 horsepower. So all of these bikes but the Honda are in the same ballpark for power – although from experience, I can say that the KTM probably has the strongest bottom-end punch. 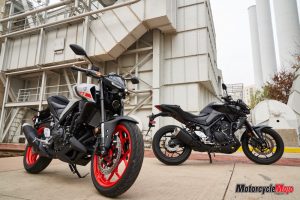 While the R3’s riding position is nowhere near as extreme as a true supersport machine and is pleasantly comfortable in an urban environment, the MT-03 is a way better choice if you don’t have your CSBK race licence. Even though the MT-03 is a kilo heavier on paper than the R3, the MT-03 feels much lighter because most of the weight has been removed from up top and forward.

A very low first gear makes launching the bike from a stop easy, and the bike can easily maintain 60 km/h in top gear, although accelerating from that speed will require that you downshift by at least two gears. While the engine lacks the bottom-end punch of a bigger engine, it compensates with surprising power up top, making the bike a lot of fun to ride if you let the engine spin past 9,000 rpm. There is a slight jump in the power band once the tach sweeps past 9,000 rpm, and the engine keeps pulling right up to its 12,500 rpm red line. If you’re in a hurry on twisty roads, this does prompt vigorous use of your left foot, but the six-speed transmission works precisely with a very light touch.

What I would add is that I really like this engine. Its rev-happy nature makes the MT-03 a lot of fun to ride, while the engine’s forgiving nature means novice riders can gain confidence easily. The engine is also mostly vibration-free, creating only some light buzzing at the handlebar and seat at higher than highway speed — at speeds below 120 km/h, there’s only mild throbbing to let you know you’re not riding an e-bike. And the engine sounds pretty good too.

As expected, steering is light and neutral while retaining confidence-inspiring stability at speed, even in the wind on the highway. Of course, there’s no wind protection for longer rides on the highway, which the MT-03 is perfectly capable of doing comfortably. And nothing should prevent extended rides on the MT, especially with the addition of a tank bag, saddlebags and other touring accessories that are available from Yamaha. In fact, many of the accessories that are available for the R3 will also fit the MT, including heated grips.

If you’re in the market for a lightweight, easy-handling bike that’s fun to ride whether you’re a beginner or even a seasoned veteran, the MT-03 is definitely worth taking a look at. Based on appearance alone, the MT-03 should appeal to a great number of riders, as it looks quite good. I prefer the sportier appearance of the KTM 390 Duke, but appearance isn’t everything. Yamaha has a better dealer network than the Austrian bike maker, which is an important factor when buying a first bike. The MT-03 is also more powerful than the CB300R, so a novice rider will probably be less likely to trade the MT-03 in for a bigger model as they gain more experience.

And the MT-03 is aimed at new riders, so it is priced accordingly. It retails for $5,899 for black or blue paint schemes, or $100 more for light grey with orange wheels. That’s $400 less than the R3, which slips the MT into a competitive category populated by bikes such as the $5,699 Honda CB300R and the $5,999 Kawasaki Z400 and KTM 390 Duke.
Like those bikes, the MT-03 also promises low cost of ownership, as most provinces offer reduced licensing and insurance costs for sub-400 cc bikes. The MT-03 also boasts low maintenance costs: the only thing that regularly needs a dealer to look is valve adjustment, which is set at 42,000 km intervals. About the only thing the bike lacks that new riders may appreciate is a USB port to charge up a smartphone; other than that, the bike’s features are quite complete.

Yamaha has a hit on its hands with the MT-03, which prompts me to ask: “Why not expand on the platform?” Putting that sweet engine in an affordable, easy-to-manage adventure bike chassis would open up the bike’s market to new riders of taller stature or those who like to explore off-road riding. And Yamaha doesn’t even need to change its name, given the MT already has the appropriate call letters for a future Mini Ténéré.