A man with no formal motorcycle education designed and built one of the world’s most renowned motorcycles.

The words “genius” and “tragedy” are often overstated, but it is surely beyond question that New Zealander John Britten was an engineering genius, and that his death in September 1995 at the age of 45 from skin cancer was a tragedy of significant proportions for the world of motorcycling. Although a crowded existence meant he had to combine family life with two full-time careers – as a commercial property developer (a business he took over after his father passed away) as well as a hands-on two-wheel visionary – Britten’s achievements have received just acclaim the world over. The motorcycles he developed, by their technological excellence and avant-garde engineering, would have been sufficient by their very creation to ensure Britten’s name is remembered. The fact that his bikes also won races around the world by defeating the products of established manufacturers having far greater resources only adds to the calibre of his achievement.

The fact that the initially weird, but later wonderful Britten motorcycles were created in Christchurch, capital of New Zealand’s South Island and the most remote outpost on Planet Earth from the mainstream of motorcycle evolution, only added to the mystique of Britten’s creations. But the extra dose of self-reliance that Kiwis get by being so remote from biking’s world stage added to Britten’s spark of dedicated enthusiasm and innovative thought and resulted in a series of machines that probably could never have been constructed anywhere else. The fact that such avant-garde, innovative motorcycles came to be built so far from the epicentres of two-wheeled development speaks volumes for Britten’s determination, which was fuelled by a healthy dose of traditional Kiwi self-reliance.

If you were a New Zealander who raced a Manx Norton in the olden days and you blew the engine, you fixed it yourself with locally made parts that often worked better than the originals. What Britten did was to go the extra mile and make the whole bike from scratch in the first place, using radical techniques and advanced materials – and all without a single formal motorcycle qualification to his credit; only his hard-earned experience in the school of life. 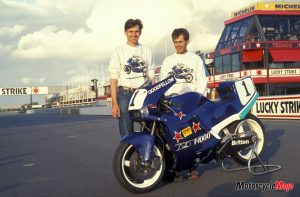 That self-tuition began at the tender age of 14, when Britten found a derelict 1927 Indian V-twin abandoned in a ditch, lugged it home on the train and restored it to running order. Shortly afterward, he did the same thing with a truck in similar condition, which he then drove daily to school.

Later in life, Britten forged his own multifaceted career, dropping out of college in favour of a long-haired hippy lifestyle in the N.Z. wilderness during his 20s, which ended in 1979 only when he bought an abandoned stable in a suburb of Christchurch that had been used by squatters. Britten used the stable as a base for making and selling glass lamps and other items of furniture. Hang-gliding, motorcycling, restoring old British sports cars he bought on the cheap had to be fitted into his schedule of restoring the stable as a future home during evenings after work and on weekends. In addition to doing all the work himself, he even cast his own doorknobs and bathroom taps because he couldn’t find any he liked.

Purchase the issue to continue reading.