An impromptu detour to northern Michigan leads to some worthwhile riding.

A factoid buried deep in the crevices of my mind, probably gleaned from a previous adventure in Key West, Fla., is that Ernest Hemingway spent the summer and fall of 1919 in the northern wilds of Michigan’s Lower Peninsula (LP) recovering from grievous First World War wounds sustained on the Italian front. I decided on a detour from my Northern Ontario ride on my Suzuki 650 V-Strom to see for myself what “Papa” Hemingway found so wonderful in northern Michigan.

I crossed the narrows of Lake Huron from Tobermory, Ont., to Manitoulin Island on the Chi-Cheemaun ferry. After touring the world’s largest freshwater island I headed west on the Trans-Canada Highway 17 from Espanola before dropping south from Sault Ste. Marie into the U.S. I was not exactly planning to follow Hemingway’s 100-year-old footsteps, but I wound up crossing his path in northern Michigan many times. While he was there to heal his mental and physical wounds, I was riding in Michigan to escape the stresses and anxieties of modern life and to seek the spiritual equilibrium that only a solo camping motorcycle ride can nurture.

In the summer of 1919, Hemingway enjoyed adventures in the Upper Peninsula (UP), which my wife and I had explored on our Kawasaki 1600 Nomad several years ago. (The UP is sandwiched between Lake Superior to the north and Lake Michigan to the south.) As I continued my current tour, the hour was getting late in the day so I headed south and set up camp in Straits State Park just in time to watch the setting sun dance over the Mackinac Bridge, which spans the Strait of Mackinac between the UP and LP.

An Unnerving Start to the Day 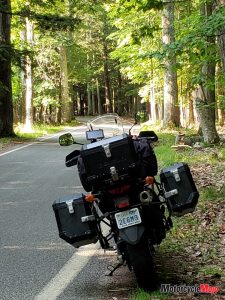 The next morning’s ride over the eight-km suspension bridge is not for faint of heart for anyone who is afraid of heights (that’s me) and that particular day’s traffic was diverted into the inner lanes of over a kilometre of roadway composed of steel grates that made navigating the strong crosswinds even more challenging.

Almost immediately, I turned off Interstate 75 onto Hwy 31 and connected to C66 west, having great fun weaving my way around decades of asphalt patches and recent potholes on my way to Cross Village and Michigan’s famous Tunnel of Trees. The first half of that stretch of S118 was absolutely mind-boggling, with a narrow ribbon of good pavement weaving its way through a dark tunnel of trees perched on an escarpment overlooking Lake Michigan. The rising sun, which dappled the trees’ upper branches, did not reach down to the roadway but occasionally lit up glimpses of Lake Michigan to the right. The road through the best part of this ride, which wasn’t much wider than a single lane, had no stopovers for photos, but no one riding a bike here would think of stopping once into their riding groove.

There was almost no traffic that morning, but toward the south end of the tunnel I met a large organized line of riders heading north. I stopped counting the bikes after 50 and I confirmed for myself the benefits of riding solo when I saw the group being alternately squeezed and expanded like an accordion as the serpentine line of big motorcycles tried to manoeuvre through the tight corners, thus ruining what should have been a magnificent ride. I finished off that section of my ride with a great pastry and coffee at the fabulous Cochon Gourmet Market and Coffee House in Harbour Springs at the bottom end of the Tunnel of Trees.

Continuing south, I entered the bustling lakeside tourist town of Petoskey, where Hemingway spent the fall of 1919. The town was bigger, newer and busier than I expected, but the large clapboard mansions overlooking Little Traverse Bay reminded me of similar buildings in Hemingway’s other home on Key West.

The Little Traverse History Museum, located in the old railway depot, provides a primer on Hemingway’s time in Michigan. I was glad when the road took me out of Petoskey, heading south along the Lake Michigan coast. Passing the drawbridge in Charlevoix, I stopped to look over the lake that Hemingway used as a base for his summer recovery a century ago.

I was told that you could still visit the general store he frequented in Horton Bay, on the north shore of Charlevoix Lake. A small Book Sale sign on the road through Elk Rapids drew me to the local library, a pretty white clapboard century cottage on a treed hill overlooking the marina, where I perused the shelves of used books. No Hemingway stories or novels, so I dropped my donation into the jar and picked up one of Lee Child’s Jack Reacher thrillers, which works for me as campsite reading.

I set up camp in Traverse City State Campground, but I didn’t see any other motorcycle campers in the 350-plus campsites, which I thought was unusual. Perhaps the other campers were setting up camp in the less expensive National Forest Campgrounds. During my walk northward along the waterfront – mainly obscured by beach hotels and condominiums – and toward a local tavern for dinner, I stumbled on to the Bayside Market. Some people in a stall in the market offered to prepare dinner for me to bring back to my campsite and I decided to take them up on it: steamed shrimp, fresh seafood salad, a wonderful pasta salad, a small charcuterie (spicy meat and cheese) with biscuits, topped off with an inexpensive bottle of ice-cold pinot grigio and finished with a homemade chocolate chip cookie and fresh strawberries. Now that was a campsite feast.

Produce, Oil and a …Sherman Tank? 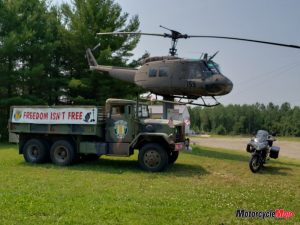 I rode toward County Road F-05, a trail that some motorcyclists say is worth the ride. I headed across S72 to pick up Hwy 131 North, which follows the railway past farms, orchards and, surprisingly, some oil wells. Many roadside produce markets beckoned, but one did reel me in – a young boy selling Fresh Washed Sweet Cherries. They were excellent, and the taste followed me all the way back to Canada. Passing through Mancelona, a typical strung-out railway town (the station shut down long ago), I was startled to see a Sherman tank pointing its muzzle right at me, a silent but firm request to slow down.

I was tempted to turn west again to see for myself where Hemingway hung out in Horton Bay, but I had not planned to follow in his footsteps and needed to be back in Canada that evening. I bypassed Petoskey again, got held up by construction and tourist traffic, then headed north on 31 to pick up S68 East. I rode right by the intersection for F-05, locally named North Black River Road, and had to backtrack to find it.

The road north and east to the Lake Huron Shore follows the slow curves of Black River and passes beside Black Lake. This was Hemingway’s route to his favourite fishing spots along the river. (I suppose I was following in his footsteps after all –some of the time, at least.) Before reaching Hwy 23, an impressive Vietnam Veteran Memorial in the middle of nowhere reminded me that “Freedom isn’t Free.” I decided I must take more time to ride this type of road.

Back to Canada, and the Bridge 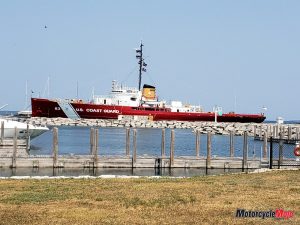 A quick stop at the port city of Cheboygan, then I was off to Mackinaw City. If I’d had time, I would have loved to take one of the ferries to Mackinac Island, which I’m told is a very historic and beautiful place to visit. I was sold on the idea immediately when they said, “No cars allowed; only bikes” – until I learned that motorcycles are not legal transportation either. That will have to be another trip. I did buy some of Mackinaw City’s ubiquitous fudge (sold in many local stores and dedicated confectionaries on Central Avenue), then sat down to a plate of Lake Michigan perch (my favourite fried fish) at Scalawags Whitefish and Chips.

I knew I had to cross Big Mac again, and I was a little anxious about that until I saw a construction crew directing traffic onto the outer paved lanes. However, my relief was short-lived; the higher I rode up the bridge, the stronger the wind. The westerly winds roaring down the strait took me broadside and I could not help myself from looking over the guardrail (rather than through it) at the choppy water 61 metres below. The wind was pushing me the same direction I was looking, and my unabashed fear of heights only added to the memory. However, I tried to be as relaxed as possible and made it back okay and set my compass northward, across the UP to Canada.

Heading home, I relived in my mind’s rearview mirror the beautiful sights, locations and vistas mentioned in so many of Hemingway’s stories and books.