With my front wheel pointed toward Rhode Island, the smallest of the U.S. states, I found myself stopping in Fall River, Mass., in front of the Lizzie Borden Bed and Breakfast and Museum. “Is this really a thing?” I asked myself. In 1892, Andrew Borden and his wife, Abby, were found dead in their home; their skulls smashed in by the blows of a hatchet. Although their daughter Lizzie had fiscal and emotional motive, she was acquitted in court and to this day the case remains unsolved. Inside the museum, the entire crime scene has been recreated and memorabilia can be purchased in the gift store.

The commercialization seemed in poor taste to me, and I certainly did not want to stay in either Lizzie’s or her parents’ rooms. So, with the rhyme still playing on a loop in my head, I hurried on. I preferred the more serene environs of wild camping to the north of town. 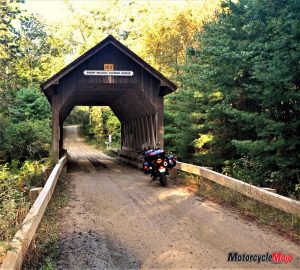 Crossing the Taunton River, I soon discovered Providence, the capital of Rhode Island and a beautiful little city. My first stop was the Roger Williams National Memorial at one end of a park named for the founder of the state.

Williams first came to Massachusetts Bay Colony in 1631 as a Puritan minister. But the Puritans, who had fled control and persecution in Europe, were, ironically, narrow and domineering in their own religious views.

Williams soon found himself in conflict with both the church and the government, and he ultimately fled to lands west. There he began a settlement that embodied his beliefs in the separation of church and state – a radical concept for the time (he was shunned as an incendiary with dangerous, anti-Christian ideas), but one that would be enshrined in the First Amendment to the U.S. Constitution more than a century later. Williams even defended the rights of belief and conscience among aboriginals – a demographic his contemporaries considered “heathen.”

On my way out of town, I passed the First Baptist Church in America, founded in 1638 (also by Roger Williams), and, at the other end of the liberal-conservative spectrum, the First Unitarian Church, established in 1720. The architecture of both buildings reveals something of their history: the first is quite simple and functional; the second is more ornate.

Cutting across the state to the west and following rolling country roads through forests of hickory, ash, oak and pine, I came to the tiny town of Foster. On the outskirts, I discovered a Town Pound, built in 1845. Such rock-walled enclosures were once used to keep livestock that had wandered away from home. In a time before private fencing on most farms, such occurrences were relatively common, and it was the pound-keeper’s job to care for the corralled animals – and collect a fine when the owner came to collect an unruly ungulate.

Dozens of these enclosures remain scattered throughout New England and often date back to the 1600s. Little known in our time, they have recently been gaining attention as important monuments to a departed way of life. As I explored the pound, a utilities worker and a police officer who happened to be there were so engaged in conversation that they hardly noticed me. I, however, enjoyed noticing their New England accent, which tends to drop the R on words such as car and chowder (which sound like “cah” and “chowdah”).

Nearby, I noticed a rugged roadway of dirt and rocks leading up an embankment among the trees. I decided to see if it would make for good camping, riding first through some greasy mud and finally up over a mound of rocks and roots. That ride was nothing that would qualify me for the BMW GS Trophy challenge, but I was glad to have my V-Strom fitted with Mitas E07 tires under me. 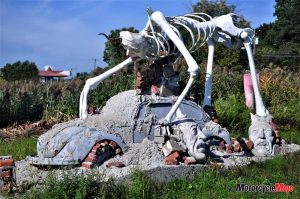 Although it was late September and the leaves were beginning to hint at change and the nights had been cool, this was a warm and quiet evening with few mosquitoes. An owl was hooting from somewhere deeper in the woods as I lay contemplating the swath of stars overhead. As I listened to a cricket, I tried to apply something I had recently learned: if you count the number of chirps in 14 seconds, and add 40, you will be able to calculate the current temperature in degrees Fahrenheit. I got 64, which seemed accurate.

I was awakened at dawn by the snorting of a large buck that was alerting others to my presence. I was especially surprised because I didn’t think I was far enough from the dense population of the coast. A heavy autumn dew had fallen, but it was still relatively warm despite the early hour.

Once my V-Strom was loaded, I jumped on to begin the day with 100 metres of “off-roading,” pressed the starter and the engine turned over lazily, as if I was trying to rouse her too early. On second attempt, I realized the battery was failing. I decided to pull the fuses to all lighting in the hope that I could coax enough power to at least get me started. That worked, and I was on my way – until I realized I would have to shut it off to refuel. And I needed to refuel.

At a corner gas station, I stopped to get some groceries and had a large, hot coffee while I let the battery rest. A local rider paused to chat. He asked me where I was from and where I had been. “I don’t like to go into Providence,” he said. “Too busy. I live in an old farmhouse here on the lake and I never go east of I-395.” He suggested I look for a new battery at the TSC in Putnam, Conn., just over the state line.

When I discovered the TSC had only batteries that still required a six- to 10-hour charge, a customer behind me recommended, “NAPA, just down the road. They’ll have what you need.” To my immense surprise, the bike started one more time and I headed to NAPA. Not only did they have what I needed, they had an EXT 12 AGM, a newer battery that, as the service manager explained, incorporates technology that dispenses with lead plates, which – especially on an off-roading machine – can rattle loose and short out. Other store patrons left me three parking spaces out front while I unloaded my gear and removed the seat in order to swap batteries, and I was grateful for the kindness of all these strangers – something I have found to be far more common than the nightly news would have you believe.

I followed a picturesque route north through tall forests to Webster, Mass., where I dropped the kickstand to admire Lake Chargoggagoggmanchauggagoggchaubunagungamaugg. The name, which looks like someone feel asleep on their keyboard, is the longest place name in the U.S. (third longest in the world), and is Nipmuc (a subgroup of Algonquin) for “English knifemen and Nipmuc at the boundary—neutral fishing place.”

I asked a couple of guys who were launching a boat if they could pronounce it. “Naw,” one admitted. “I just call it Memorial Lake” – for the Second World War Veterans Memorial Beach, where we stood.) When I asked a family who were relaxing on the deck of their boat, the teenaged daughter piped up, “I can! Lake Chargoggagoggmanchauggagoggchaubunagungamaugg! I learned it from my grandma!” I can only assume she was correct. Honestly, who could tell?

A Rider Around Every Corner 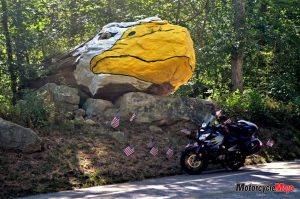 Highway 197 and then 198 toward Woodstock, Conn., and beyond were wonderfully winding and rolling paved routes, especially as they skirted the edge of Natchaug State Forest. The trees seemed to turn deeper yellow, orange and red every hour. Every rider in the state appeared to be out on his or her bike, perhaps sensing the season slipping away. Who could resist a perfect Sunday with a high of 25 C, the sharp visibility of low humidity, sunny blue skies and the faintest breeze? Leaves fell in swirls from overhanging oaks and maples. I count myself lucky not to have acquired repetitive strain injury from all the bikers’ waves I reciprocated.

Following Hwy 66, I pulled over in Middletown, Conn., at the sight of a VW Bug being consumed by some kind of skeletal monster. Behind that stood a decaying amusement park, complete with a haunted house that was collapsing in on itself – an attraction that truly was threatening. The road led on to Waterbury, at the base of a ridge of the Berkshire Mountains where another defunct park lay in ruins: Holy Land U.S.A. Built in the early 1950s by John Baptist Greco, who envisioned a roadside theme park devoted to God, the park was visited by 50,000 people per year at the peak of its operation. When Greco died in 1986, however, the park began to fall victim to time and vandalism.

I wandered the park’s steep grounds, noting all the scenes, now in shambles, that once depicted the life of Christ. Small signs gave the only indications of what the scenes meant. Most striking was an incandescent 20-metre-tall cross of steel and plastic overlooking the town below, and a Hollywood-style sign on the hillside. (There is a town joke that citizens grow up thinking Jesus was electrocuted on the cross.) Perhaps the park’s demise is a problem of location, I mused, as any realtor will tell you.

I recalled a similar, even larger park operating successfully in Eureka Springs, Ark., which I visited the previous year. There, the Bible Belt can sustain such an attraction. I have since read that Waterbury’s city council is working to renew Holy Land U.S.A. to attract tourists.

One plaque I noticed in the park referred to Jesus and Veronica – a wholly Catholic doctrine – and as I rode through Waterbury and, subsequently, Middlebury, Southbury and Danbury, along with their similarity in names, I noticed a high number of Catholic churches, with much evidence of a concentrated Latino population. I later learned that among those who claim a religion in the region, 35 per cent are Catholic, which outstrips all others by a huge margin.

That night, I found an out-of-the-way place to camp in the woods outside Danbury. After tangling myself in prickly ash, a thorny shrub that I initially mistook for some kind of wild rose, I relocated to a more open space under some hickory and basswood trees. In the falling dark, I nursed my wounds, made a little dinner and stretched out on my Thermarest cot, counting my blessings for these days of autumn riding and secluded camping. I thought of friends and family back home; while I would never want to live my life without them, I felt that to temporarily chase the dreams of a vagabond can be good for the soul.