A history of Australian Superbike racing in the 1970s and the world-class racers it produced.

The much spoken-of but still undiscovered Australian Rider Factory must surely exist somewhere in the vast island continent to allow a country with a population of fewer than 25 million to produce such a consistent array of world title-winning riders over the past half-century. In the U.K., more than one-third of British Superbike grids often are occupied by Australasians – so, yes, Kiwis too – who have travelled to the other side of the world to pursue their goals of winning races – and championships – and all too often, they do just that. This book tells the story of how that came about.

Although a healthy contingent of riders from Down Under had already become part of the Continental Circus privateer community in 1950s-60s Grand Prix road racing, it wasn’t until the advent of the Superbike era in the 1970s – a class of racing founded in Australia in 1972, as Vincent Tesoriero, its inventor, explains in this book – that Australasians began to really make their mark on the global stage. 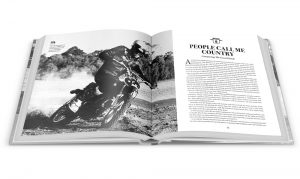 This magnificent coffee table volume recounts the often amazing story of how that dominance occurred, as told by authors Darryl Flack and Don Cox, two of Australia’s finest motorcycle journalists who were there when it happened. Included are a foreword by Wayne Gardner and 335 photos, many of which speak a thousand words. Check out Mick Doohan power-sliding his Suzuki RM80 in 1976 at age 11, or Mick Cole on his mile-wide Honda CBX six-cylinder leading a huge pack into Turn 1 in the 1978 Castrol Six Hours, already by then the most important production-bike race on the planet.

Australians witnessed an explosion of interest in motorcycling in the early 1970s, thanks in part to then-prime minister Malcolm Fraser, who was also a rider, and fuelled by a massive mining boom that put money in the pockets of young men who were in pursuit of speed and thrills on two wheels. More than 160,000 motorcycles were sold in Australia in 1972 and, in June 1973, Sydney’s Oran Park race circuit claimed a world-record weekend race program of 1,400 entries.

Cox and Flack have tracked down and interviewed many of the men involved in this explosion of talent to tell the story of those hell-raising days, vividly social nights and thrilling weekend races that eventually made grand prix team bosses look at Aussie and Kiwi riders as must-haves rather than could-bes. The early days of the Suzuka Eight-Hours recounted here were part of that, and together with the Swann Series, the Easter Bathurst races, the Castrol Six-Hours and NZ Marlboro Series combined to act as the crucible for the products of that rider factory.

The Yamaha TZ750, Suzuki RG500, Kawasaki KR750 and other smaller-displacement two-strokes form the bedrock of the story – but, come the second half of the decade and the big four-strokes (up to and including that six-cylinder Honda ultrabike) take pride of place.

To hear American Superbike star Wes Cooley describe his awe at seeing Graeme Crosby in action up close and personal for the first time is a nugget. And indeed Croz is one of the standout stars of this book, which includes a recount of his rise from obscurity as a Kiwi bike wrench to one of the most versatile racers the world has yet known.

Crosby shares that star billing with the likes of Kenny Blake – an Aussie version of Croz in terms of versatility – Warren Willing, Murray and Jeff Sayle, Stu Avant, Greg Pretty, John Woodley, Ron Toombs, Gregg Hansford and so many others, including a young Wayne Gardner.

Overseas stars play a part in the tale as well: besides Cooley, these include Pat Hennen, Mick Grant, Barry Ditchburn – the latter of whom liked Australia so much he later emigrated there.

Rich in vivid anecdotes and an empathy on the part of the authors with the time whose story Race Across the Great Divide tells, this book is a must-read for any fan of road racing in the past three decades of the 20th century because so many of the men depicted in the tale went on to make their mark on the world stage. It’s a truly gripping read.

Published by Bellbird Publishing. To order, go to bellbirdpublishing.net.