The throttle acts as if it’s either on or off and, with dubious handling, this race bike is a handful on the track. But one thing is certain, it does win races.

Australia’s Troy Corser marked the 20th-anniversary staging of the U.K.’s Goodwood Revival in 2018 by thundering to his first victory (together with Austrian teammate Herbert Schwab) in the Barry Sheene Memorial Trophy event – the world’s most prestigious Historic-class road race, which that year catered to pre-1954 bikes of up to 1,000 cc. The partners’ ride was the oldest bike in the race, a supercharged 1929 500 cc BMW R57 Kompressor boxer-twin owned and prepared by Herbert’s father, Paul Schwab, 72, whose hobby for the past 50 years has been restoring, tuning and racing vintage BMWs. “Troy is an extremely nice guy who’s incredibly skilled as well as so cheerful, and good to have around,” said Paul. “How he rides the bike is just unbelievable – with no testing beforehand, he was immediately fast when he rode it for the first time ever in qualifying at Goodwood.” 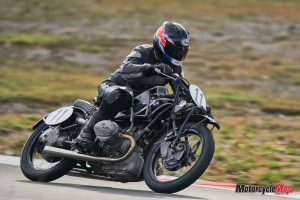 In the second of the two 25-minute races held on the Duke of Richmond’s historic 3.81-km Goodwood circuit, two-time World Superbike champion Corser came from behind to catch and pass the previous winners of this event, 23-time Isle of Man TT winner John McGuinness and teammate Glen English, who rode a 1953 500 cc Manx Norton. In scoring victory in Race 2 by 14.47 seconds aboard the venerable BMW, Corser and Schwab overcame the 8.40 second time deficit the duo had incurred in Race 1, held the previous day, when Corser stalled the bike at the Le Mans start and was only 15th out of the 30 starters at the end of the first lap. But by circulating four seconds faster than McGuinness to set successive lap records, and thanks to a 16 km/h top speed advantage over the TT ace’s Norton (203 km/h versus 187 km/h), he pulled the BMW up to third place before handing over to Schwab. The Austrian rider, a KTM development technician in his day job, bravely held that place to the finish, to reach the podium in his first visit to the fast British track. 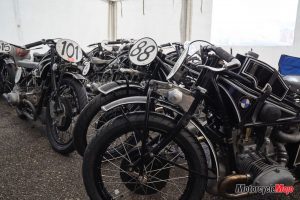 “I had to get permission from my boss at KTM to come here and race a BMW, even one my father built!” said a jubilant Herbert. “But [my boss] knew all about the race, and said there was no problem. So here I am on the podium. I think Papa did a good job!”

An even better result was to come in Race 2, in which Schwab held second place from the start behind McGuinness’s teammate Glen English before handing over to Corser at the halfway mark in the 16-lap race. The Aussie star broke his own lap record, set the day before, to catch McGuinness, giving him a playful pat on the bottom as he swept past him along the pit straight in full view of the 100,000-strong crowd of spectators [See it at bit.ly/3c4SM6R.] “I was going to pinch his bum, but I couldn’t get too close to him because of the BMW’s cylinder sticking out the side,” said Corser afterward, “so he just got slapped instead!”