A supercharger added to an already great engine in a naked bike means we have a new contender in the ring.

Motorcycles have always been more combustion-focused than their four-wheeled counterparts. Unlike cars, motorcycle engines are (very) seldom completely covered. Even full-boat touring rigs and aerodynamically sculpted superbikes usually have a clutch cover or cylinder head poking out somewhere. And normal bikes – motocrossers, dirt bikes, nakeds, cruisers and adventure tourers – all put their pistons and crankshafts front and centre. With cars, an engine is a specification; on a motorcycle, it is the styling focus – the focal point of all the design flourishes that surround it. Just for a moment, try to imagine a Harley-Davidson Softail with any engine other than a V-twin; the Asian manufacturers did, and look where that got them.

You sit right on top of the thing. Literally. On a typical motorcycle, your butt will be, quite literally, inches from furious internal combusting. Incredibly close. Hell, if said Softail blows a rear rod with sufficient enthusiasm, you just might find out whether 100 millimetres of Milwaukee piston makes a passable sex toy. You really are that close to all the furious goings-on.

Indeed, chances are that if you don’t like the engine, you won’t like the motorcycle. The aforementioned Harley is always a love-it-or-hate-it affair mainly because its engine is, well, a love-it-or-hate-it affair. Ditto for a screaming 600 cc four. And BMW’s big six quite literally dominates every aspect of the K1600’s appeal. To paraphrase the immortal Marshall McLuhan, the motor is the motorcycle. 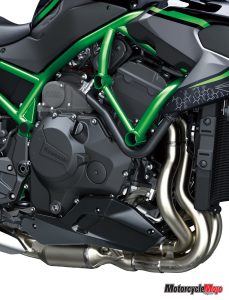 So, when I say that the best engine in motorcycling right now is Kawasaki’s supercharged 998 cc four, it’s important. Not just because it has a supercharger. Not because it boasts a claimed 197 horsepower. Or 101 ft-lb of torque. Because it’s the best motorcycle engine overall money can buy.

In fact, the truly amazing thing about Kawasaki’s H2 engine is it would still be one of the very best four-cylinder motorcycle engines even if it didn’t have a supercharger. Yes, what I am saying is that even robbed of said forced induction – and 20 or 30 per cent of its boost in power – the H2’s 76 by 55 mm inline-four would be one of the best engines in biking.

It is, for example, wonderfully smooth, certainly the most vibration-free four in Kawasaki’s lineup. The engine also “carburates” better than most fuel-injected bike engines these days. There’s no softness off idle, no spitting through throttle bodies on overrun or hypersensitivity in rapid on/off transitions. Every motorcycle manufacturer – I’m looking at you, Honda and Triumph – should get its EFI calibration so right. The H2’s engine is even quiet, more frugal than you’d think and, because it’s a Kawasaki, it should be as robust as hell. Like I said, even without forced induction, it would be a great, great motor.

Of course, the engine does have that supercharger, which takes what would be an excellent example of the breed and renders it perhaps the best engine since Ducati slapped four extra valves on its 90-degree L-twin. Even in this whimpiest guise, Kawasaki’s supercharged four’s 197 claimed horsepower is scary. In other guises, notably the H2R, this engine will pump out as much as 310 horses – that’s more than most MotoGP bikes, by the way – the main difference among the various models being tuning specifics such as cams and exhaust plumbing. The supercharger remains 69 mm in diameter throughout the lineup – although the turbine vanes in the H2R are more aggressive – and its gearing (spin it faster and it’ll pump harder) is identical for all four variants. In other words, there’s not all that much separating the already stupendous from the downright silly.

Impressive on the Dyno

We backed up that supposition on the Riders Choice Bazzaz dyno – shoutout to Matt McBride for giving the big Kawi a thorough wringing out – and found that the supercharged Z pumps out 182 rear-wheel horsepower. Considering that’s only an 8 per cent drop from Kawasaki’s official crankshaft claims, either the H2 is particularly efficient or Team Green is underestimating the big Z. Even more impressive – and in complete contrast with the screaming 1,000 cc superbikes that can manage around the same rear-wheel horsepower – the Z H2 peaks, according to the dyno, at a comparatively calm 10,400 rpm. And while many motorcycles claim a “flat” torque curve, the Z H2 only has the slightest of humps to interrupt the linear flow of pound-feet; it almost looks like someone used a straight edge to create the Z’s dyno chart.

But, here’s the thing: there’s almost assuredly a lot more fun to be had. Unlike virtually every horsepower curve that I have seen, once the Z H2 hits those 182 ponies at 10,400, it continues to make almost exactly the same amount of power for about another 800 rpm or so. (We didn’t spin it up any harder because we were “encouraged” by Kawasaki Canada’s marketing boffins to not blow it up.) Normally, of course, once an engine hits its peak, power then slowly – or abruptly – begins to taper off. One has to suspect that there’s some form of artificial stifling happening. Maybe the route to further horsepower liberation is as simple as a freer-flowing exhaust (those aforementioned marketing types’ contention) or it might require some form of electronic fuel injection jiggery-poo (my contention). But, whatever the solution, there would seem to be even more to the Z H2 than currently meets the dyno. 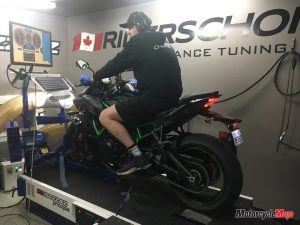 Not that this bike needs it, of course. Indeed, for anyone not making his or her living in professional stunting, it’s probably the exact opposite. For one thing, a supercharger is driven by gear or belt, so has none of the lag of a typical turbocharger. That translates into immediate throttle response. By 2,000 rpm, the Z H2’s big four already feels “healthy.” Somewhere around 3,500 rpm, it transitions to decidedly muscular. And by five grand, it’s seriously steroidal.

Indeed, were it not for the fact that the top end is so gawdawfully silly – those 182 rear-wheel horses I mentioned – one might label its 998 cc as torquey. Of course, then, around 6,000 rpm, the H2 begins trying to tug your shoulders out of joint like Jordan Szoke’s ZX-10R on full boil. This is all made worse – or better, depending on your view – by the Z’s relatively higher handlebar, which makes keeping the front wheel on the ground that much harder.

Popping top-of-third-gear wheelies may no longer be my thing, but for everyone who’s ever wanted a bike that can mono-wheel on command just by rolling on the throttle, your bike has arrived. This is to know almost MotoGP silliness mated with supercharged grunt. Married with an almost electric ease of use, the H2 is an incredible engine – the best, as I said, in the biz.

The rest of the Z H2 is in keeping with its intended purpose. The frame, although outwardly similar to the H2 and the SX, is different from both; its wheelbase a little shorter; its steering a little tighter. Ditto for the suspension, which, to keep the price down, is all mechanically adjustable. In fact, there’s not even a hydraulic preload adjuster, mainly because, I suspect, that no one at Kawasaki expects Z H2s to ever carry a passenger or get loaded down with luggage. This is a hoon’s bike, expected to spend an inordinate amount of time mono-wheeling around on its rear Pirelli. 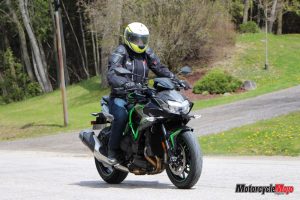 That might explain one of my few complaints: namely, that the rear suspension is overly stiff. The front 43 mm Showa SFF-BP fork, for its part, is firm – superbikishly so, perhaps, but not extreme. The rear, however, feels like the suspension designers expect its Showa Uni-Trak to carry the weight of the entire bike for extended periods of time. Any Z H2 owners willing to corroborate my mono-wheel damping theory via miles-long wheelies over bumpy roads, please write courtesy of the editor; I always love having hypotheses confirmed. I, unfortunately, am far too sensible – as in “too old” – for such antics.

If one presumes that the stiff rear suspender is by design and not miscalibration, then my only real complaint is that the front brakes, which lack stainless-steel lines, can be quite squishy. Not that they aren’t powerful; Brembo M4.32 calipers gripping 320 mm discs generate tons of stopping power. But there’s lots of lever travel to it and if, like stubby-fingered me, you like to both run the lever as far back as possible and two-finger brake, there will be some jamming of the pinky. I’d make a bigger deal about it except that this is a supercharged Kawasaki for less than 20 large ($19,599 for its base paint trim; $20,199 if you opt for the tri-colour version). And by the way, the front 120/70ZR17 Pirelli Diablo Rosso III — there’s a 190/55ZR17 version in the rear — generates plenty of traction for stoppies.

While I am picking nits, the seat – both rider and passenger portions – is a plank, the dashboard is a little too small and could you please, Kawasaki, put those awful, government-mandated warning stickers somewhere other than on that beautiful lime green trellis frame.

Other than that, the Z H2 is pretty darned good naked bike powered by the best engine in motorcycling. Indeed, I am going to end this by pointing out that I think it is the Z H2 – and not that Z900 RS thing – that is the most fitting tribute to the 1973 Z1. Yes, I know the Z900 has the orange and brown gas tank that nostalgists demand. But, New York Steak – that was the company’s internal code name for the bike that forever changed Kawasaki – was all about that glorious, industry-dominating engine. The Z1 was the first true superbike, 903 hard-charging cubic centimetres of “letting the good times roll.”

I think this supercharged Z is its true spiritual heir.