A style of racing that incorporates three isciplines of racing onto a single compressed track provides non-stop action for racers and spectators alike.

Last summer while visiting my old stomping grounds in beautiful Victoria, I found myself sitting on a lakefront dock with my kids wondering what we were going to do that night. I called my friend, Mike Nickerson, who said he was going to Western Speedway to watch the Victoria Supermoto races and that I should go as well. He thought the kids would love it. I contacted another old friend, Scott Collins, to see if he or anyone else I knew was going to be racing.
“You should race too!” said Scott.

I tried to tell him that I didn’t have a bike or any of my own riding gear with me, but none of that seemed to matter to him. “I’ve got stuff for you. Just get here,” He practically ordered me. “All you have to do is show up and race. See you tonight!” So just like that, it was settled and I headed to Western Speedway with both my kids to apparently race! 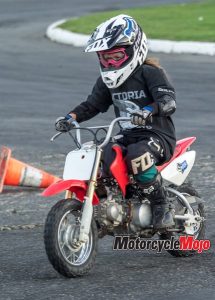 Supermoto racing blends three styles of motorcycle racing and track surfaces all mashed together: the high-speed style of paved road racing, the sideways sliding style of hard-packed dirt tracking and the action-packed motocross-style of dirt jumping.

Races are typically held on small road-racing circuits or go-kart tracks with the infield section made of dirt. Usually it’s about 70 per cent tarmac and 30 per cent dirt, although oftentimes the races are run 100 per cent on pavement, as was the case with my races. One benefit of this type of racing is that courses can be fairly easy to set up on any large, open section of asphalt. Parking lots and unused runways can be transformed with cones and corner barriers into portable and inexpensive racetracks that offer fun and challenging layouts.

Various sizes and models of dirt bikes are used with road racing (slick or DOT) tires as opposed to knobby dirt tires. Riders can choose to race with a flat track or motocross body position or knee-down road-racing style, and the competition is usually close with a lot of passing and opportunities to practise skills and racing craft.

Not only is the event fun for competitors, but it’s an excellent way of training or getting extra seat and practice time for other motorcycle disciplines as well. Oliver Jervis, national motorcycle racer and OMRRA Number 1 plate-holder, uses Victoria Supermoto as an important aspect of his training regimen before, during and after his race season. He says, “Besides actual seat time on a superbike, I think supermoto is the next best thing for improving or just maintaining riding skills and sensations.”

Luckily Victoria is home to one of the healthiest supermoto clubs in North America. Part of this is because of the close proximity to the track – Western Speedway is just 10 to 15 minutes from downtown Victoria. Western Speedway, founded in 1954, is a 4/10-mile paved oval track and is considered Western Canada’s oldest speedway. The other part is because of the excellent management from Calvin van Elsakker, the club president, and all the dedicated volunteers who complete tasks such as sweeping the track, setup and takedown, flagging, administration and safety. Because of them and their hard work, the club sees an average of 35 to 40 riders showing up for weekly practice evenings and races.

Practice nights are every Tuesday evening from April through to the end of September, and the races are run on the last Tuesday of each month. There are about 40 track layouts that the club rotates through depending on both track conditions and who is helping out on that particular day, so riders are challenged and things are kept exciting – you never know what the configuration will be! Setup for the races begins at 4:30 p.m., the mandatory riders meeting is at 5:50 and racing begins at 6:00. 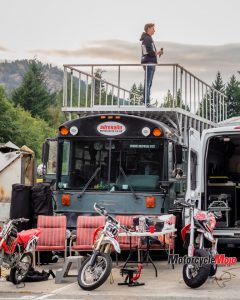 I arrived at the track around 5 p.m. and was excited to see a lot of familiar faces from when I lived and rode in Victoria almost 20 years ago. Scott and his girlfriend, Steph, greeted me right away, took me to their zombie-decorated racing/travelling bus and showed me the CRF150R (big wheel) I was to ride. Then they decked me out in some leathers, boots and gloves (I happened to have my own Arai dirt helmet with me, thankfully) and led me to registration. There I was able to get special race approval from the club president based on my previous race experience. I paid my entry fees, about $55 for the night, and was ready to attend the riders meeting.

There is no charge for spectators, and that night there were quite a few. My two kids were extremely excited to be allowed to climb up to the top of the zombie bus to watch the racing action and cheer me on.

Bike sizes ranged from 110 cc to 625 cc and the classes were broken down by the skill of the rider, not the size of the bike. This is because the Victoria Supermoto club has riders that are very competitive on smaller-displacement bikes, and with the constantly changing track layouts, larger bikes are not always an advantage for the rider.

I was put in the novice group, which only meant that the riders in novice that day were experienced, but with slightly slower lap times. Most of my competitors were on bigger bikes, so they figured with me on the 150 it would even out the field. I didn’t particularly care what class I rode in; I just wanted some seat time and to experience the thrill of racing with good friends.

At the start line, my intention was to take it nice and easy for the first race to learn the bike and the track and to be super-respectful of the borrowed equipment. However, as most racers will tell you, once the flag dropped, all that responsibility melted away and instinct took over. It was game on, and I wanted to win.

I got a decent start and was flying into the first very tight turn of the course when I grabbed the front brake and realized quite suddenly that my bike wasn’t slowing down as quickly as the 2019 BMW S1000s I’m used to riding. Time to turn, but I hadn’t yet slowed enough, so I tucked the front end and was down, sliding across the pavement. I jumped up, picked the bike up, restarted it and took off again, now in last place. I was angry with myself and a little embarrassed, to say the least. Not my greatest moment, but the riding and racing was still incredibly fun.

The second race went much better, with me keeping things upright and enjoying the challenge of tightening my lines and closing the gap between the lead riders and me. I ended up with a third-place finish and was even awarded a nice plaque at the end of the evening during the informal awards ceremony.

A Great Night Out 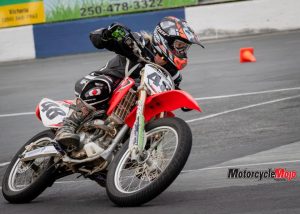 What was most amazing were the smiles and laughter of the participants and the fans. My kids thoroughly enjoyed running around, playing with other kids and watching the races. I enjoyed the friendly competition, the camaraderie and the excitement. Participating didn’t cost much, no one got hurt, no one was too bothered by the bike going down, as nothing was damaged or broken on it. The evening turned out to be extremely family-friendly and entertaining.

“[The event] is local, inexpensive, plentiful riding and racing with great people and lots of heart,” said Scott, my good friend and the 2019 overall club champion. “Fans come out and take pictures that make us look amazing. If this was a Comic Con, we would all be superheroes!”

I would suggest any enthusiast who’s ever wondered about supermoto should check it out. The skills learned in a controlled environment translate directly to helping with street or dirt riding and can also make you feel a little like a superhero for a night.