The intake and exhaust valves must be in good condition as they play an extremely important part in how the engine perform.

So, your mechanic tells you your bike needs a valve job. What exactly does that mean? To understand what a valve job is, you must first understand how valves do their job. The camshaft takes care of when and by how much the valves open and close. The valves allow the intake mixture to enter the combustion chamber, and the spent gasses to exit after combustion. However, the most important job valves do is to seal the combustion chamber so that the intake mixture can be compressed and ignited. That’s pretty much it.

A valve is made of two main components: the stem and the head. These two items are welded together seamlessly and give the valve its mushroom-like shape. Looking at a valve with the head facing downward, the parts of the valve include the tip, which is the hardened flat part that is pushed on to open the valve; the keeper groove, which locks the spring retainers (the spring closes the valve); the stem, which rides in a valve guide in the cylinder head and keeps the valve aligned; the fillet, which is the radius that blends the stem to the valve face; the valve face, which is the angled sealing surface of the valve; the margin, which facilitates airflow around the valve and helps dissipate heat; and the combustion face, which comprises part of the combustion chamber roof. Another critical part of the valve is its mating valve seat, a cylindrical piece that is press-fit into the head and, when properly mated to the valve face, forms an airtight seal. 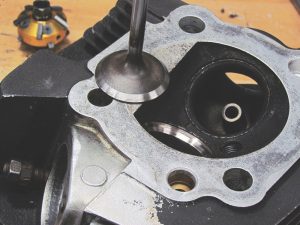 One indication that an engine might be due for a valve job is oil puffing through the exhaust when the throttle is closed and the engine is revving down, indicating that the valve guides are worn and oil is seeping between the stem and guide when engine vacuum is high. Another is a leak-down test, in which leaking valve seats are discovered by a poor gauge reading and the sound of air escaping, either through the exhaust, through the intake bore or both.

Usually, when valves leak, it is due to a pitted valve face and valve seat. Some pitting is normal and causes minimal to no leakage, but severe pitting causes excessive leakage, which results in poor engine performance and poor fuel economy. Things that cause pitting include excessive heat, excessive carbon buildup (usually due to oil consumption) and valves that are adjusted too tightly, the last of which prevents the valves from seating long enough to dissipate heat into the cylinder head.

Aside from the hardened valve and seat surfaces, other factors that help reduce valve seat pitting are the width of the valve seat contact area – a seat that is too wide is prone to pitting– and the angle of the seating face. The factory spec for the valve face is angled at 45 degrees, while the seat is angled at 46. This degree of difference allows only the outer edge of the valve seat to contact the valve, which theoretically helps break away any carbon buildup on the valve-seat mating surface.

A valve job will include either replacing the damaged or worn parts or, if the parts are not too far gone, refacing the valve face and tip, recutting the valve seat and verifying the guide-to-stem clearance. This job requires specialized equipment. A valve-resurfacing machine does just that with great precision. Just enough material should be removed to eliminate the pitting while maintaining the minimal margin; the more a valve is ground, the thinner the margin gets. 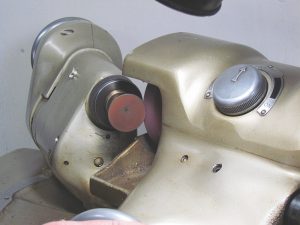 Manufacturers include specs for valve-seat width and its location on the valve face. A specialized valve-seat cutter is used to recondition the valve seats. A basic valve seat has three angles: 30 degrees on the combustion chamber side, 46 degrees where the valve seats and 60 degrees on the port side. These different angles are used to adjust the width of the valve seat as well as its location relative to the valve face. They also provide a smoother transition from port to combustion chamber to improve airflow through the valve-seat area. Again, a minimum of material must be removed so as not to recess the valve too deeply into the combustion chamber, which is detrimental to airflow. Also, the valve stem will protrude more on the cam side, which will require a valve clearance adjustment. If a valve protrudes beyond spec, an unfavourable rocker arm or cam-lobe angle will cause excessive wear on all the related parts.

Done properly, and considering that the components from the head-gasket surface on down are in good condition – again, a leak-down test will confirm this – a properly performed valve job will restore an engine’s performance to the level it was just after its original break-in.