It’s easy to say that the Yamaha Ténéré 700 was one of the most anticipated motorcycle models of 2020, and with the company’s early-deposit program generating even more hype for the bike, it no doubt has made a name for itself in the adventure segment before anyone had even seen the bike or ridden it.

An appealing price point, a bare-bones approach to how the model was outfitted from the factory, toned-down electronics and a slim rally-inspired profile attribute to the huge appeal of the Ténéré 700. It’s been a long wait to have something simple again; we’ve adapted to all of the new options and electronics that have been slapped on bikes to help with the ride, handle any condition and any terrain – but is that what we want? Making adjustments to suspension, throttle response, ABS, traction control, anti-slip – all while just trying to ride a motorcycle. Are we moving further away from the basis of adventure riding and more into showcasing technology? Are we becoming more passenger than rider? 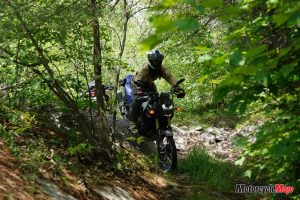 I had the chance to put the T7, as it’s come to be known, through its paces during a week in Ontario and Quebec, from long highway hauls to loose rocky terrain, from deep sand to wide water crossings. As my companions and I rode about 2,300 km during the week, we explored gravel and trails north of Montreal and the off-road ATV and snowmobile network near Bancroft, Ont.

When first sitting on a T7, understanding why it would perform well is easy. Its tank tapers down to a slim seat, making the T7 feel like you’re sitting in the bike instead of on it. It does prove itself in versatile riding conditions and is comfortable, both when sitting and standing. The slim seat keeps your hips straight and aligned, putting you in a more comfortable position when your feet are down. The slim seat also means the bike feels nimble while you’re standing on the pegs. However, the seat can be uncomfortable over long distances, not to mention the lack of wind protection can strain your neck and shoulders.

The handlebar height is ideal for a wide range of riders; it’s comfortable when sitting for long distances, but also encourages assertive body position while standing. If you’re 5’6” or shorter, you can lower the handlebar slightly to get a better off-road riding position, but overall the handlebar is placed very well.

The seat height is 875 mm, which is manageable for a shorter rider, but not if you prefer to stand flat-footed. A low seat or rally seat are options. The low seat option offers a height 20 mm lower than stock and costs $318.95. The rally seat option, priced at $567, sits at the same height as the stock seat, but offers high-grip sides to help you maintain a more aggressive riding position. Both seat options are said to be narrower than the stock seat, which I already found to be quite narrow, and I feel would cause pressure points on long hauls. While these optional seats would offer better off-road performance, I think they would decrease comfort even more while on the highway.

During my rides, I noticed myself struggling to ensure my feet were placed firmly on the pegs. Part of the reason could be the overall slimness of the bike; but I think it has more to do with the right-hand engine guard: I consistently had to move my feet to feel the pegs while riding, I was constantly rubbing the engine guard with my boot when reaching for the rear brake and I had to turn my toes inward to ensure I hit the rear brake. I only noticed this while wearing my dirtbike boots, but not when I wore low-calf slim riding boots. Some riders with larger feet or who ride often with off-road or adventure boots may notice the engine guard more.

Back to Basics Display 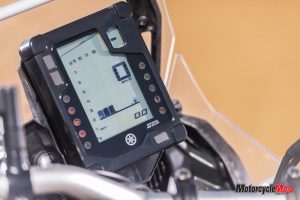 The T7 has a simple, almost retro LCD display. With only three buttons on the display, you can turn your ABS on and off and filter through your odometer, trip meters, fuel economy and ambient and engine temperature. There is a thumb toggle placed on the right side of the handlebars, although scrolling through the menu while keeping the throttle steady is quite a trying task. I would prefer to see the toggle on the left-hand side, so I used the buttons directly on the display instead.

The front spoked wheel is equipped with Brembo dual-piston calipers and a pair of 282 mm discs, while the rear wheel has a single-piston Brembo caliper and a 245 mm disc. I found the brakes to be responsive but a bit soft. The Ténéré’s front and rear ABS can be turned off in about five seconds while stopped by pushing and holding a button on the display. The ABS resets to on when the ignition was turned off or the kill switch is activated, which reminded me just how much I stop – and forget to turn the ABS off again while riding off-road. The ABS is, however, predictable and handles well in gravel when it is on, but having the option to turn it off is nice. The process is simple and you know what to expect, not to mention losing the rear end a little in gravel corners can be a thrill.

The front wheel is a 21-inch and the rear an 18-inch and both have tubes, which is a unique contrast to most of the T7’s midsize adventure competitors and appeals to more dirt-oriented riders who may be more familiar with carrying tubes. Repairing a flat by the roadside tends to be far more difficult than for a tubeless tire. Some T7 owners have switched to tubeless tires, although that means having to replace the front rim, as it’s not equipped for tubeless tires. The stock rims are fitted with Pirelli Scorpion Rally STR tires, and they faired very well through the various terrain we rode on, proving themselves extremely durable over sharp shale rock and handling well on the highway and in wet conditions.

Both the fork and the shock on the Ténéré are fully adjustable. The fork’s stock setting is stiff; you may want to adjust it as soon as you get your bike in your garage. I say “in your garage” because the compression adjustment is at the base of the lowers and may take additional “groundwork” to adjust the fork and shock to your needs. At highway speeds, the stock suspension setting felt rigid and harsh when riding over potholes or cracks; off-road, it eased up and felt more progressive.

The stiff shock became responsive on gravel. At one point, we found a trail entrance that began on a fairly steep rock face and I was surprised to feel the fork be quite forgiving at lower speeds. Overall, it does the job, but having a more performance-based fork integrated into the rally design would be nice.

The bike’s slim profile makes the T7 easy to handle in technical sections. I found the tank width to be good, but I had trouble gripping the tank and seat with my knees while standing. Yamaha sells accessory side pads for the tank to help with gripping the tank.

In tight, slow manoeuvres, the T7 is top-heavy, even though its wet weight is relatively low at 204 kg. The front end feels a little unpredictable in tight turns, especially when the tank is topped up. On the road, however, the Ténéré feels stable and comfortable when blasting around corners. 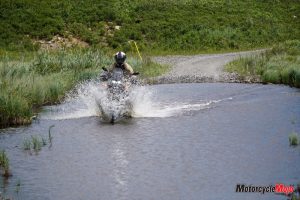 The T7 uses the same exceptional engine as the MT-07 but tuned differently to improve the bike’s adventuring capability. Horsepower and torque specs aren’t provided on Yamaha Canada’s website, but, according to European specs, the parallel twin pumps out 72.4 hp and 50 ft-lb torque – more than enough power to get through long hauls, yet offering smooth, non-intimidating power on technical trails. The engine is one that both novice and advanced riders can enjoy.
I found the transmission was a little clunky when up- and downshifting in lower gears. The gear ratio offers shorter-range snaps of power to adapt to trails, while third gear and up are smooth and forgiving for the road. Fuel mileage is quite good on the T7: four litres for every 100 km on average, so its 16-litre tank gives an estimated fuel range of around 400 km.

The four LED headlights and two LED position lights give the Ténéré an unmistakable face and offer bright visual coverage in the dark. The rear turn signal stalks vibrated a lot while riding. They were quite flexible and I doubt they would break from a fall, but their flexibility meant the base popped out of its mount. After riding just on light gravel and the highway, I had to pop one of the turn signals back in place twice.

Concluding that the $12,399 price tag is a fair price is difficult, as there’s nothing quite comparable to the Ténéré. It’s a great machine that has style and can handle itself in most situations, but it lacks the creature-comfort electronics, performance suspension and other components that would be so valued on this machine.

With the increasing number of rally events around North America for recreational riders, there’s no doubt this rally-styled machine is welcome at this time. From the face to the tail, the Ténéré 700 offers an aggressive minimalistic design to inspire riders going back to just riding. That was exactly Yamaha’s goal: to offer an affordable and capable midsize adventure bike that can be easily upgraded with many accessories from the company. And you can bet that the aftermarket will be producing many components for the T7 as well. Yamaha’s back-to-basics approach has proven successful in producing a capable and affordable machine that will appeal to such a large group of riders.