This author had passed through Kentucky on his way to other places, and he promised himself he would return to explore the state one day. Promise fulfilled!

The fading sun left behind the sparks of a million fireflies as I pulled into Kentucky Horse Park, just north of Lexington. I had come to Kentucky on my 650 V-Strom to fulfill a promise to myself. I had passed through the Bluegrass State frequently on interstates to somewhere else, but had never stopped to explore. So, I was back. And I was about to discover that if ever I had been looking to practise graceful and technical cornering in an idyllic setting, then Kentucky was for me.

As I set up my bivy, I thought back on the day’s ride. I had delayed my departure due to a bank of turbulent weather, wondering if I was just being a wuss. But rolling into Dayton, Ohio, I discovered a curtain of tornadoes had made national news for the destruction they had just unleashed on the city. Cleanup was underway, and I rode through neighbourhoods without roofs, where large trees lay in tangles and city crews were using snowplows to clear debris off the roads. In parking lots, numerous churches and agencies had set up relief centres offering food, water and clothing. Businesses stood in darkness. Amazed though I was, somehow it seemed disrespectful to take photos. I moved on, counting my blessings and thinking of a riding buddy who had recently been caught and injured by just such a storm in the U.S. Midwest. 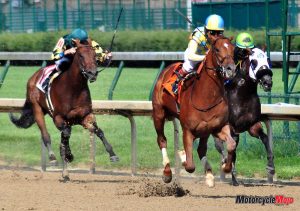 Before setting out the next morning, I took some time to wander in the park, which was home to several national horse and jockey associations, a museum and a track. Standing at the foot of a monument to Man o’ War (one of several horses buried here with honours) whisked my thoughts back to my childhood craze for all things equine. Back then I read novels, books, training guides and, after working at the nearby racetrack as a mucker of stalls, I even persuaded my parents to let me buy a horse with my earnings.

My old flame was further stoked by my ride past sprawling, manicured horse farms on narrow winding country roads – all paved, I noted, and in excellent condition. I especially admired the dry stone fences that lined many of these roads. These walls were made of limestone carefully stacked without mortar by skilled masons (many of whom were enslaved) and are part of the most extensive network of dry stone fences in the U.S. The fact that only 10 per cent remain hints at how common they once were.

The World’s Most Famous Chicken

Steep and rolling hills covered in bluegrass led me to Shelbyville just as the multitude of churches were letting out (this was, after all, in the Bible Belt) and families were collecting at Claudia Sanders’ Dinner House. Claudia was the wife of none other than Col. Harland Sanders, who, while they lived in Corbin to the southeast, had perfected a recipe for fried chicken. After a good run, he sold his restaurant. But when the corporate suits changed…