A family visit to England results in an unusual birthday gift.

Cheryl Grunsell leaned across the front seat of the car and gave her husband, Paul, a quick kiss. While doing this, she discreetly pushed the button on the garage door remote control and said, “I’ve got one more surprise for you.”

Returning home from a dinner to celebrate Paul’s 50th birthday, the couple had just pulled into their suburban Calgary driveway. As the door slowly went up, Paul saw feet, then knees, and then a garage full of their closest acquaintances.

“I thought this was a surprise party and went in and said, ‘Nice to see you’ to a couple of people and shared a few hugs,” Paul recalls. “That’s when the crowd parted, and I stood there speechless.”

Speechless because what the group of 30 or so friends had been concealing was a 1951 Royal Enfield Model G, a 350 cc single-cylinder motorcycle that had once belonged to his Uncle Dennis. It was a machine Paul had last seen just a year before in England while visiting family.

“Paul was born in Peterborough, England,” Cheryl explains. “He moved to Ontario with his parents in 1977 and left behind most of his family.”

Back Across the Pond

In 2018, Paul’s dad, Dave, had been undergoing cancer treatments. At one point that year, Dave mentioned that he’d like to go back to England one last time with his wife, children and grandchildren to visit family in the old country – and that trip became a reality late in 2018.

“While visiting Auntie June in Nuneaton,” Cheryl says, “she asked if we’d like to see Dennis’ workshop.”

Unfortunately, Dennis had died in October of 2017, but during his lifetime he had been a keen motorcycle enthusiast. June knew that Paul shared that passion, so she thought he would be interested in seeing the shop.

First Bike was a Car 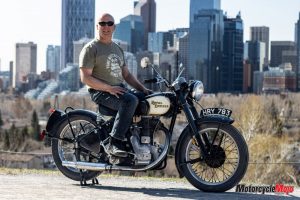 Although Paul was not a lifelong motorcyclist, he has always been interested in them. He was 18 years old when his friends were getting into motorcycles and Paul had saved some money to buy a bike of his own.

“That’s when my dad said he’d match whatever money I’d saved if I bought a car instead,” Paul recalls. “So, I bought a 1986 Mercury Capri. It wasn’t until I was 38 that I got on a motorcycle after taking the Canada Safety Council training program.”

Paul’s first machine was a 1991 Suzuki GSX1100G. He confesses it wasn’t the right first bike, but that didn’t hinder his interest in riding. One year later, Cheryl took the training program too, and got her Class 6 motorcycle permit.

The Grunsell family now owns 10 motorcycles, including Paul’s 2012 Triumph Tiger XC and several smaller bikes that get used by the couple and their children, 18-year-old daughter, Erin and 16-year-old son, Nathan, at their summer cottage.

“When we were with Auntie June, she hadn’t been up to Dennis’ workshop since he died,” Cheryl says. “We had to wrestle with the weathered lock and skeleton key before we could open the door.”

Paul adds, “It was like we were stepping back in time. His tools were all laid out on the bench and his boots were there, just waiting to be stepped back into.
“His runabout Triumph 955i Daytona was there, and we rolled it out to admire it in the daylight. I then noticed another bike, covered and safely tucked away in the back corner. June followed my gaze and told us it had been Dennis’s pride and joy. I removed the cover and rolled out the Royal Enfield Model G.”

Paul and his uncle had exchanged occasional emails to share stories about machines and riding. Although Paul had known about the shop, and about the Royal Enfield, seeing everything as last used by his Uncle Dennis was an emotional experience. Paul put everything back, locked the door and the family went back into his aunt’s house and shortly afterward returned home to Calgary. 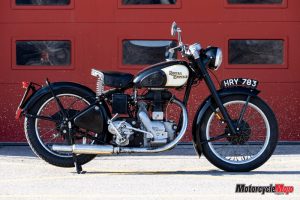 Cheryl picks up the story again.

“In June of 2019, I began to wonder what I was going to do for Paul’s 50th birthday,” she says. “Any idea of getting another bike, particularly the Royal Enfield, didn’t even enter my mind while we were in England. But to celebrate a milestone like that, I began to think about it and I sent a note to Auntie June.

“I tentatively asked, ‘Forgive me if this is too early, but if you’re ever thinking of finding a new home for Dennis’ Royal Enfield motorcycle, would you consider selling it to me for Paul’s 50th birthday?’”

June didn’t respond right away, and Cheryl began to wonder if she’d stepped out of line by asking.

However, June replied the next day and suggested that Cheryl’s timing was uncanny, as June had recently decided to begin selling some of her late husband’s possessions.

“I didn’t know the logistics of importing a bike, so I asked some of Paul’s friends if I was crazy for thinking about even trying to do this, or would it be an epic birthday gift? They all said it would be absolutely epic,” Cheryl says with a laugh.

Cheryl and June agreed on a value of £3,000 and plans were put in motion to have the motorcycle delivered via Motorcycle Express. That company put the bike on a pallet and shipped it from Gatwick Airport in London to Calgary.

“June’s and Dennis’ daughter, Sarah, was instrumental in helping [set that up] and her older sister, Rachel, helped get the paperwork in order. It really was a family effort,” Cheryl says.

The bike arrived in October 2019, and Cheryl had to go through Canada Border Services to get the motorcycle cleared for release. Two of Paul’s closest friends, Wes Hill and Kris Petterson, loaded up the Royal Enfield and Kris stored it in his garage until the day of the reveal on Nov. 8.

After the reveal, and having toasted Uncle Dennis with some rum, Paul began a quick history lesson about Royal Enfield and the Model G.

The motorcycle company was co-founded in the late 1880s by Albert Eadie and Bob Walker Smith. They joined forces and bought out a company that produced light machine parts and bicycles. Shortly after that, the partners took on a contract to construct rifle components for the Royal Small Arms Factory at Enfield in Middlesex.

After successfully completing the rifle contract, the company designed and built a new bicycle and marketed it under the Royal Enfield brand. By 1893, the company adopted their famous field gun trademark and the “Made Like a Gun” advertising slogan.

As mechanized transportation began to flourish, the firm became the Enfield Cycle Co. Ltd. of Redditch and built quadricycles and tricycles powered by De Dion 1-3/4 horsepower and 2-1/4 horsepower single-cylinder engines. Given the firm’s background in bicycles, however, grafting an internal combustion engine onto a Royal Enfield two-wheeler was the next logical step.

Motorcycle development quickly expanded, and by 1932 Royal Enfield had introduced the Bullet, a name given to two single-cylinder four-stroke sporting models of 350 cc and 500 cc capacity. In 1933, a 250 cc version was added to the lineup. 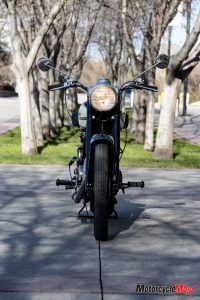 After undergoing several design changes following the Second World War, the 350 cc Bullet came to the attention of India’s government, which was looking for a motorcycle the police and military units could put into service. In 1954, India’s government placed an order for 800 Bullets, straining the Royal Enfield factory to its limits. The quota was met, but when another, larger order was placed, the English company sought to establish a factory on Indian soil.

At first, the Bullets were sent in kit form for assembly in Madras (now known as Chennai), but eventually the Enfield India Ltd. factory was producing complete motorcycles – and continues to do so, albeit with several improvements and some new models.

Royal Enfield (in England) continued to offer the Bullet while refining its range of machines. By the mid-1960s, the company was constructing powerful motorcycles with parallel-twin engines, notably the 750 cc Interceptor. However, by the late 1960s, the Redditch Royal Enfield factory ran into financial difficulties and closed its doors in 1970.

A Brother to the Bullet

Paul’s Model G is not a Bullet, but it is a close relation. In 1951, the 350 cc Bullet had swingarm rear suspension and was called the Model G2. The Model G, originally introduced in 1936, cost less to purchase because it had a rigid frame and a 350 cc engine in a lower state of tune than its Bullet sibling. Even the Amal carburetor on the G was smaller, at 15/16” versus the 1” carb on the Bullet.

“I started reading up, wondering what all the levers on the handlebars were for,” Paul says of his Model G. “There’s an air control, a magneto lever, a valve lifter and the gear shifter is on the wrong [right-hand] side of the bike.”

After checking fluids, adding fresh gasoline and following advice from a Royal Enfield handbook, Paul got his Model G to start without much fuss. Shortly after that, winter descended on Alberta, but Paul continued to tinker with the bike until this spring. That’s when he was finally able to get it insured and through its Out of Province inspection before properly registering the motorcycle for the road.

Henry Becomes Part of the Family
“We kept the nickname, Henry, that Dennis had given the bike, inspired by the original English registration number,” Paul says, then adds, “Henry and I are still getting to know each other, but I’ll ride the Royal Enfield to vintage bike nights and around the neighbourhood. Our son has really taken an interest in motorcycles, and one day it could be his. We’re so happy we could keep Henry in the family and give him a new lease on life in Canada.”

Sadly, Paul’s father, Dave, was not able to attend the birthday celebration or the reveal in November and he died on March 3, 2020. Paul says although he has been a Canadian most of his life, a piece of his heart will always belong to the U.K. He adds that his father was proud that his children and grandchildren are interested in preserving and celebrating their British ancestry – and that includes looking after the old Royal Enfield.

Cheryl adds, “It’s been so much fun doing this all for Paul.”

At which point Paul concludes, “I’m definitely a lucky man.”