Alan Cathcart brings us the most lust-worthy bikes from around the world.

The engine in this purpose-built racer bears an uncanny resemblance to the V-Rod’s engine, which was introduced nine years later.

Exactly 25 years ago, in 1995, Harley-Davidson’s production of the motorcycles that made Milwaukee famous broke the 100,000 annual production barrier for the first time. Moreover, the new-for-’95 30th-anniversary Electra Glide became the first volume production Harley-Davidson model to feature electronic fuel injection. But one year earlier, besides the Sportsters and Fat Boys, America’s finest had briefly added a new, radically different customer streetbike to the company’s catalogue that also featured EFI: the VR1000 Superbike.

For the first time ever, you could buy a V-twin Harley road bike that was: a) liquid-cooled; b) had anything other than a 45-degree angle between the cylinders; c) used some means other than pushrods to work the valves; d) featured EFI; and e) could break the U.S.’s 55 mph speed limit then in force (until December 1995) in second gear. The fastest street-legal production motorcycle ever made in America could have been yours for just $49,490 – a huge sum back then – in exchange for which you had to promise you’d never ride it on U.S. streets. 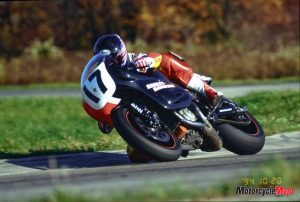 Germany was okay, though – because that’s where the street version of the bike that brought Harley-Davidson back to road racing in 1994 was homologated for everyday use in 1993. Well, AMA Superbike rules didn’t say where a bike had to be approved for street use for it to qualify for homologation; only that it must be so somewhere in the world. That, and you had to build at least 50 bikes with lights and a…