Whether riding cross-country or digging trenches on the forest floor, this 160 horsepower beast does it all in style and comfort.

You don’t add a qualifier like “super” ahead of a noun if you don’t mean it. Well, there’s no doubt that KTM chose the word correctly when naming the 2020 1290 Super Adventure R – it is truly the superbike of adventure tourers.

The Super Adventure R is the Super Adventure S’s off-road-oriented sibling, priced identically at $20,199. The R features 20 mm more suspension travel, at
220 mm front and rear, and a dirt-ready wheel combination of 21-inch front and 18-inch rear, as opposed to the S’s 19- and 17-inchers. The R’s spoke wheels, like the cast wheels on the S, are tubeless. And unlike the S’s semi-active suspension that is electrically adjustable, the R features manual adjustability front and rear for compression and rebound damping, as well as preload, the rear of which is conveniently done via a knob. The taller suspension and larger wheels on the R raise seat height to a lofty 890 mm from the S’s already tall 860 mm.

The R’s riding position is roomy and upright, and the midsection is relatively narrow between the knees considering the bike’s overall size. The riding position can be altered slightly, as the handlebar is adjustable by 10 mm fore and aft via reversible risers, and the foot pegs are adjustable diagonally to two positions over a 10 mm range. Unlike the S, which has a height-adjustable seat, the R’s seat has only one position.

The height-adjustable windscreen is smaller than on the S model – it’s tiny, in fact – but this facilitates stand-up riding: you won’t knock the windscreen with your helmet when hitting big bumps. Raising and lowering the screen can be done while riding via a knob on either side of the instrument panel.

Electronics to Keep You Busy 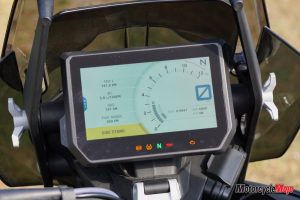 The instrument panel is a 6.5-inch TFT screen, which, aside from the prerequisite speed and engine RPM, also displays time, gear position, air temperature, oil temperature, battery voltage, trip computer info (fuel consumption, range, etc.), ride modes and service interval mileage (which is set at 15,000 km). Don’t worry, you won’t be overwhelmed by the plethora of available information; the screen is configurable to display the info you want to see. The display automatically changes contrast from the daylight level when it’s dark out or you’re riding through a tunnel.

One gripe I have with Super Adventure R’s HMI (Human Machine Interface, in science speak) is that you have to scroll through several layers of menus using the left-hand combination switch to perform some basic tasks. Turning on the optional heated grips, for example, requires scrolling through the menu until you find the heated grip screen, then selecting the heat level. The heated grip menu remains visible unless you back out of that screen to the general information screen. You then have to repeat the process to change the heat level or turn off the heat.

This same procedure is used to select ride modes. It’s all rather tedious, although with time you get familiar with the controls and the process gets quicker. It does, however require you to look at the screen while riding, which is a big no-no for such simple tasks, especially when a single button can do the job more efficiently.

Highly convenient features include LED headlights with lean-sensitive cornering lights, self-cancelling turn signals, cruise control and illuminated handlebar switches. There’s also a 12-volt accessory socket below the instrument panel and a USB socket in a watertight phone case located inside the right side of the fairing. 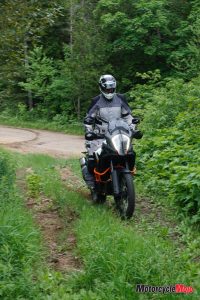 Among the things that make the Super Adventure R the superbike of adventure tourers is its 1,301 cc, 75-degree V-twin, which claims 160 horsepower and a whopping 103 ft.-lb. of peak torque. That’s huge torque for any motorcycle, and well above the 85-ish ft-lb of modern 1,000 cc inline-four supersport machines. This makes the Super Adventure R a pure brute when twisting the throttle wide in Sport mode (the three other ride modes are Street, Rain and Off-road). The engine stretches your arms relentlessly as the tachometer sweeps to red line, regardless of which gear you’re in.

Speaking of gears: the six-speed transmission shifts with a light touch and a short throw of the shifter when using the clutch, or you can opt for clutch-less gear changes up or down because the bike is equipped with a quick shifter. The quick shifter works very well with a light touch on the R, which isn’t something I can say about other KTM models with this feature I’ve ridden, some of which had a firm shifter and provided jerky gear changes at lower speeds. The slipper clutch is very light to operate, as the slipper mechanism also enhances spring pressure when accelerating, thus enabling the use of light springs.

Electronic rider aids include cornering ABS and lean-sensing traction control, both adjustable. When venturing off-road, switching to the aptly named Off-road mode softens throttle response and limits power, and turns ABS intervention way down at the front and turns it off at the rear wheel to allow sliding into tighter corners. The mode also allows the rear wheel to spin at twice the speed of the front wheel for controlled drifts. Traction control can be turned off; the ABS cannot – at least, not completely.

Don’t Stop When the Pavement Ends

Despite the Super Adventure R’s size and 217 kg dry weight (approximately 242 kg full of fluids), the bike is remarkably adept on dirt, allowing a modestly fast pace without overtaxing your mental capacity. The R is not a sharp-handling, enduro-like machine like the 790 Adventure – the latter of which I’d pick as my all-round adventure companion – but the R steers precisely and quickly enough to avoid fast-approaching obstacles, and the suspension is compliant enough to react to such obstacles without bottoming or throwing you off the seat if your reflexes are too slow. And the rims are tough, as I discovered after hitting a rut hard enough that it almost knocked my teeth out, but didn’t put even the slightest ding on the front rim.

On pavement, even with the suspension adjusted on the soft side after some off-roading, the Super Adventure R handles like a tall, albeit cushy sport bike. It carves sweeping curves without wavering, but is a bit slow in tight turning transitions and dives considerably when braking hard. Of course, firming up the damping would improve both of those situations. And the brakes – Brembo four-piston radial calipers with 320 mm discs up front and a two-piston caliper on a 267 mm rear disc – are supersport-strong, the front capable of bulging eyeballs with a two-finger pull on the lever. The ABS is completely non-intrusive in Off-road mode on dirt.

During our test, the bike bettered its claimed 5.5L/100 km fuel consumption by sipping just 4.9 litres of fuel per 100 km, which would take it about 465 km before the 23-litre fuel tank ran dry. 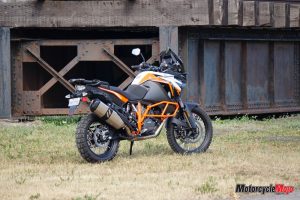 Do you really need 160 horsepower on an adventure bike meant to venture off-road? No. No, you don’t. You can wander into the wilderness with just 44 ponies on KTM’s own 390 Adventure, then roll back onto pavement with a grin that’ll stretch from ear to ear. But if your needs require more than just enough power, or you plan on crossing the continent loaded with luggage, the 1290 Super Adventure R is a much more sensible choice, especially if your cross-country trek takes you off-road. Or if you’re just a glutton for horsepower and enjoy launching rocks off the rear tire like missiles, it’ll work for you too.