There’s nothing like riding with your best friends. Evoking a few smiles along the way is just an added bonus.

In 2017, mortgage broker Brian Korzenowski decided to move back to Victoria from Saskatchewan with Zeus and Apollo, his two Rottweiler dogs. His dogs were his life and they accompanied him everywhere, so he often wondered how he could incorporate his two best friends into his passion for motorcycle riding. That’s when he thought of a sidecar.

“[Riding with the dogs] was kind of an iffy thing,” Brian explained. “The dogs were already seven years old. What if they didn’t like the sidecar? What if the motorcycle was too loud or they were too scared?”

It was a bit of a gamble, but Brian did it anyway. He bought a bolt-on sidecar to fit his 2007 Harley-Davidson Road King. When it arrived, he put the body of it in the garage and told his dogs, “Zeus, Apollo. Get in there.

“Both dogs got in the sidecar right away. Honestly, the rest is history. They absolutely loved it!” says Brian with a laugh. “Who says you can’t teach an old dog new tricks?” 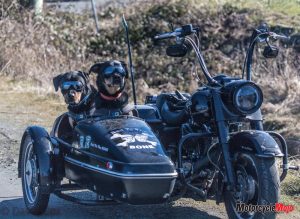 After a few slow trial rides around the neighbourhood with the dogs in the sidecar, Brian had to figure out how to belt them in. “Those boys were like my children!” he says. “I had to keep them safe.” He had some steel plates made with loops on them, which he bolted to the frame of the motorcycle; those loops get attached to dog harnesses Zeus and Apollo wear so they always are safely hooked in.

Soon they were going for longer rides. After two months or so, Brian decided the dogs needed something to protect their eyes. Brian tried sunglasses, but decided better protection was needed. He ordered a product called Doggles (goggles for dogs) and, believe it or not, Zeus and Apollo wore them for the entire ride.

“They were so happy just being in the sidecar,” says Brian. “I think it was a combination of the wind in their face, being with their owner and just being out and about instead of being stuck in the yard or stuck inside having to stare out a window.”

Brian also outfitted the dogs with full-body rain suits and jackets – one red and one green. For the next three years, the trio rode together everywhere on Vancouver Island. A man and his dogs. A motorcycle and a sidecar. 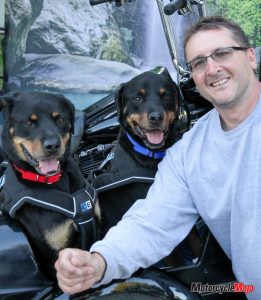 Brian, Zeus and Apollo often rode around downtown Victoria and whenever they stopped to hang out and watch the tourists walk by, the trio would draw a crowd. Smiling people would ask to take pictures and pet the dogs.

As Brian got to know more riders in the Island’s strong riding community, he began attending bike nights, toy runs and other motorcycle fundraising events. He and his dogs were all about participating in anything that involved raising funds or bringing money to a group or cause.

A favourite event was the Santa Claus Parade in downtown Victoria two years ago. Brian decorated his motorcycle with several strands of…