I really don’t think BMW needed to focus-group hundreds of first-generation S1000XR owners to glean that the most significant improvement it could make to its original adventure sports bike was reducing the revvy, superbike-derived engine’s incessant vibration. Pretty much every motorcycle journalist told them that five years ago, when the XR was introduced, and I’m guessing the company’s dealers also heard it from customers.

Not anymore. The new inline-four is not only better balanced, but BMW also rejigged the handlebar mounting to better isolate the massively oversquare 80 x 49.7 mm four’s natural secondary vibrations. Throw in longer gear ratios in the top three gears – the engine revs about eight per cent less in sixth gear – and one has a becalmed S1000XR. It’s not a perfectly balanced K1600 six, but where the previous generation adventure sportster was downright annoying, the 2020 XR is now suitable for the sport touring with an edge niche BMW carved out for it. 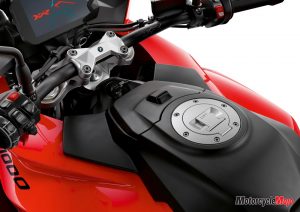 Part of that “edge” will be suspension that is right at the top of the adventure bike class, given the XR’s Dynamic ESA Pro electronic suspension adjustment system having a wider range than ever. The top-of-the-range Dynamic mode is almost S1000RR-firm, while Road is more accommodating than the softest damping available on the first-gen ESA system. Besides the reduction in vibration, the biggest improvement to the 2020 XR is its wider range of damping adjustments.

Said versatility is backed up by boasting no fewer than six seat height options. Ranging from the standard 840 mm to a low of 790 mm and a high of 860 mm, there is quite literally a seating arrangement for a wider percentile of riders than virtually any adventure bike I can think of.

That said, unlike every other adventure bike I have tested, the new XR has a deeply sculpted – and surprisingly firm – almost touring-oriented “bucket” seat. I found it quite comfortable, but it does tend to lock you into one place. Those who like to move their butts around a flatter seat may find the tight constraints a little confining. And there will be far less “hanging off” the S1000XR during cornering, with the pronounced edges of the seat limiting Marc Marquez-style knee-down heroics. 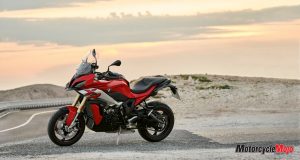 The odd thing about BMW’s choice of seat contours is that while the saddle seems more touring-oriented than before, the riding position is decidedly sportier. BMW foresees much of the XR’s clientele as disaffected superbikers with aging lower spines no longer able to tolerate below-the-triple-clamp clip-ons. Nonetheless, these riders don’t like the “sit up and beg” riding position of traditional adventure bikes, so BMW rendered the new XR more comfortable – er, familiar – for them by lowering the 2020 XR’s handlebar by 10 mils and moving it forward by another 20 compared with the outgoing model.

That’s a noticeable stretch compared with the previous XR and, as I said, most other motorcycles claiming adventure status. Indeed, the S1000XR now feels more like a naked bike with an adventure tourer’s fairing. There’s a little more control in the corners, but less comfort on the highway. BMW says this is what XR riders want. Personally, I predict someone is going to make a killing making S1000XR bar-back handlebar risers because, as it is, the seating position will probably be the biggest impediment to purchase.

Jewel of an Engine 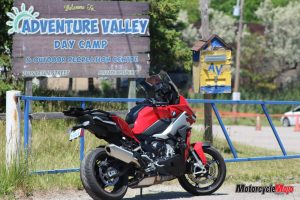 Okay, enough with all these creature comforts considerations. The real reason anyone buys an S1000XR is that great honking engine. Well, thankfully, while all that annoying vibration has been largely banished, the big four’s eagerness to rev has not. Oh, there’s enough low-end torque – “plenty” would have been too strong a word, especially with the taller gearing in the top three gears – but, if you’re an ex-superbike rider, you’re just going to love the way this engine claws for revs.

BMW deliberately didn’t include its ShiftCam VVT system, but one still feels a dramatic “coming on the pipe” around 7,000 rpm as the XR responds with two-stroke-like frenzy. One minute, it’s all mild-mannered FZ1; the next, it’s doing a fair S1000RR impression. Oh, The XR’s 162 hp may seem be muted compared with the 205 horses BMW’s superbike boasts, but compared with other adventure bikes, it’s a monster. An addictive monster. I may not have liked the new riding position, but that might be a good thing because I don’t think my driver’s licence could survive a comfortable S1000XR. If you like your adventure bikes “super,” the S1000XR is right at the top of the class.

One last thing to like about the new S1000XR: it turns out that S1000 owners are a little more Scrooge-like than most of BMW’s traditionally bucks-up clientele. The previous-generation XR’s comparatively bargain pricing was, according to BMW’s research, the most popular reason for purchase. For 2020, the XR starts at $19,750 and, while that is some $1,650 more than the previous version, it’s still $1,445 less than Ducati’s cheapest 1260 Multistrada and even undercuts the Kawasaki Versys LT SE by a couple of loonies. Enough perhaps to afford a set of those bar-back risers I mentioned.