Three brothers who rode together as teenagers reunite for a ride several decades later.

I’m cruising at 30,000 feet in one of Air Canada’s wide-body planes and somewhere beneath me is my motorcycle. We will land in Toronto five hours after departing Vancouver, which is a lot faster than my planned return trip. Shipping my bike was one piece of a larger puzzle that would lead to a 10,000-km ride.

My two older brothers and I rode motorcycles as teenagers. John and I never stopped riding and, over the years, have made a number of big trips together. But when Allen, our eldest brother, bought a motorcycle, all our interests aligned again.

Over the previous winter, a number of emails were exchanged about the possibility of a Maritime tour and because I live on Vancouver Island, it was up to me to make the big commitment. I looked at shipping options and Air Canada was the best choice.

The boys confirmed the dates, and I booked my shipping and my own ticket. At the end of June, I was at Vancouver airport with my 2007 BMW R1200GS, saddlebags mounted and loaded with my tools and riding gear. The bike had to be checked in with Air Canada Cargo a minimum of six hours before the flight time, so I arrived with the required “dangerous goods” certificate, my bike’s weight and dimensions, proof of ownership, a list of what would be travelling with the bike and only a quarter tank of fuel; I boarded the plane later with my carry-on bag. Air Canada personnel checked over my bike, then strapped it to a shipping palette. 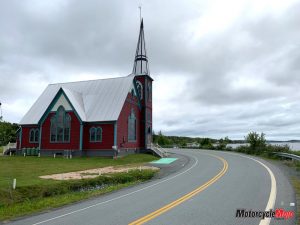 Forty-five minutes after landing in Toronto, I’d made my way through the airport, got a cab to the cargo building and was presenting my paperwork to the woman at the front desk. I’d been warned it could take up to four hours to get my bike back, so I was ready to sit and read.

“Yes, your motorcycle is already here, Mr. Peters” she said with a smile. That was faster than my last flight unloaded my suitcase. Into the warehouse with more paperwork in hand, and soon I could hear a forklift bringing my bike to me.

I had been filled with apprehension about the shipping and was pleasantly surprised to see my concerns were for nothing. The very friendly and efficient staff at both airports made the process easy and my bike arrived without a scratch. 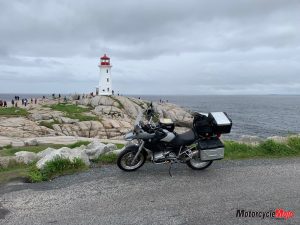 Twenty minutes later, I’m wearing my riding gear and heading out to face what felt like the most dangerous ride of the trip. Feeding onto Highway 401 around midnight with its multiple lanes, construction closures and aggressive drivers meant going straight to full alert. Next was the exit onto Hwy 400 North with more construction, repeated lane changes and a fast ride up to Barrie, where John lives.

You are not allowed to ship your personal items with your bike, so clothes, toiletries and such must travel with you. Therefore, I had to pack my saddlebags again.

The first day of riding saw John and I weave our way across southern Ontario’s back roads to Marmora, where we turned south on Hwy 14, then onto Hwy 62 to Picton, then rode Hwy 33 alongside the St. Lawrence River to Gananoque.

The next morning began with a lovely ride on the 1000 Islands Parkway, then…