A snapshot of a man who has devoted his adult life to supporting and nurturing the sport of trials riding in Western Canada.

Some say that pursuing your passion and staying active can keep you young, and although it won’t turn back the wicked hands of time, I believe this outlook on life to be true. Seeing is believing, of course, and watching the 83-year-old weathered grin sweep across Dave Rhodes’ face as we rode trials bikes reinforced my belief.

This isn’t a tale of winning titles or becoming the best rider; it’s merely the tale of a humble man who has dedicated his life to trials riding. Rhodes has spent much of his life growing the trials community in Alberta and the interior of B.C., just one of many achievements throughout his lifetime. In 2018, Rhodes was inducted into the Canadian Motorcycle Hall of Fame for his promotion and growth of the trials community.

Throughout the years, Rhodes has gained such nicknames as Mr. Trials and Outlaw Dave – with good reason. Rhodes formed his legendary life as a modest Welsh photo engraver, and later planning the course for the first FIM Canadian World Trials Championship.

The Life of Dave Rhodes 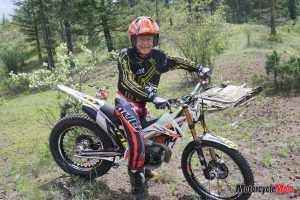 Rhodes left school at age 15 to become a photo engraver. He first found his passion for motorcycles at this age as well. He recalls a knock on his door one day in 1953; it was a schoolmate garbed head to toe in motorcycle gear and with a brand-new BSA 125 cc Bantam competition model. One look at the bike and Rhodes was hooked. He and his best friend decided they would save their money for a new bike and, in late 1954, Rhodes bought a 197 cc James and his friend bought a Francis Barnett.

“That was how it all started,” Rhodes says. “We were out riding all the time around the Welsh countryside. Then one Sunday we went to watch a trial and followed the competitors all over the muddy terrain (with our street tires) and, again, I was hooked. I traded in my street bike for a competition model. Soon I was riding trials and also had a go at scrambling.”

Rhodes developed his skill in photography through his work in photo engraving. He recalls when photography moved to the 35 mm format: “I couldn’t afford a Pentax, so I bought a Rangefinder camera to go to the local scrambles. [In the] first couple rolls, the riders were just pin dots in the background because of the small lens on [my camera]. So I’d go and wait, then stick my head under the ropes until I could see the whites of their eyes to get the photos. Of course, after some time, I graduated to a better camera and then could stand a bit further back.”

Throughout the years, Rhodes has published articles in various motorcycle publications about the Scottish Six Days Trial as well as feature stories about the Alberta motorcycle racing scene. 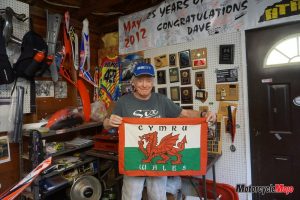 Motorcycles weren’t Rhodes’ only love. He soon crossed paths with the lovely Barbara Jones, and followed love of a more conventional kind. Competition took a back seat while he built a life with his wife…