A point-and-shoot enduro that does exactly what it’s told.

Earlier this summer I was invited to go single-track riding in Squamish, B.C., with some new friends. I brought the only dirt bike I own, a 2006 Yamaha YZ125 that has seen some off-road trails and a few motocross tracks. While I tried to tell the group that I didn’t have much experience riding super-tight single-track, they forged ahead and in the first 10 minutes of the ride, I experienced some of the hardest terrain I’d encountered thus far.

I was like an ungraceful deer as I attempted to ride up and over some gnarly roots and rocks in the middle of a technical mossy-green trail. The ring-ding-ding of the two-stroke rang in my ears as I struggled with balancing throttle and clutch, trying to propel myself up the seemingly never-ending path of dirt, large rocks, step-ups and tree roots. I tipped over because the bike is several centimetres too tall for me. I stalled. I struggled. I kicked it over and over to start it, and somehow managed to make it back to the truck, utterly exhausted.

Need a Bike That Fits 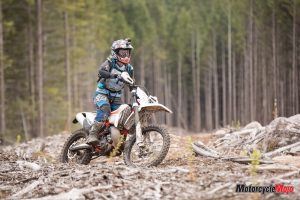 “We need to get you a proper trail bike,” said Phil Lay, executive member of the Squamish Dirtbike Association as he handed me a beer. What ensued was a long conversation about what bike he and others in the group, thought would be the perfect trail bike for a rider like me.

I’m a 5’4” intermediate trail rider with the potential to grow into a bike. The issues I’ve struggled with in the past when choosing a dirt bike that will fit me physically (seat height, weight, manageability) are often too underpowered or limiting. I need something physically smallish, light and manoeuvrable with enough power to grow with me but not enough to overwhelm and exhaust me.

To be honest, I’d not heard much about Beta before and, incredibly, two days later I was standing next to one, ready to ride. Serendipitously, Steven Howland of Beta Canada had been on his way through Squamish when Phil called him inquiring about a demo 200, so Steven generously dropped off the bike. Icing on the cake was that also on short notice, Jordan Junck, a childhood friend, was able to join us to take some wicked photos.

It has electric start with a backup kick-start option available from the factory. In fact, the Build our own Beta program allows you to choose a prebuilt package or add your favourite parts to completely customize your 2020 Beta, with no extra labour charges for adding those parts.

I love the crisp, clean lines and the simple, traditional colour scheme. And while the 93 cm seat height means that my toes are closer to the ground than on my 125, I’m nowhere near able to have both feet touch at the same time. 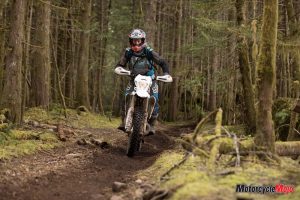 That being said, as we took off down the path, I instantly felt comfortable. Power came on smooth and linear without being abrupt or surprising. As we crossed a narrow bridge and began heading up a tight, flowing trail of loose rocks and minor twists and turns, I noticed that the bike felt effortless when climbing; low down-grunt and second-gear steadiness. I didn’t have to feather the clutch; I didn’t have to pin the gas. Steadily, she climbed.

Same thing as we turned and entered a steeper, tighter trail with bigger rocks and roots: steadily, she climbed and braaaped over everything that I encountered. I didn’t blindly launch myself over obstacles like I did previously on my own bike, but I was able to choose lines more carefully and purposely and pick where I wanted to go. The Beta 200 went wherever I told it to go, with excellent handling and precision.

Suspension felt plush and compliant – never too hard or rigid. I seemed to flow over gritty, rutty stuff with ease and comfort – not like my usual bouncing and ping-ponging ride over things with accidental success.

At the top of the hill, Phil looked proud and said, “You’re riding way better on that Beta already!” He beamed.

“I feel like I’m riding a cheater bike!” I said. “Climbing is so easy!”

With a dry weight of 97 kg, the Beta 200 RR felt very light and nimble with excellent, agile handling through all of the tight sections. The biggest difference I noticed between the Beta 200 and my YZ125 was when stopping and starting on a hill. Whereas my 125 struggled, the Beta has the low-down torque that allows it to power over steep, rutty stuff from a standstill.

While I loved the way that the Beta climbed and maintained that small lightweight feel, I did notice that on the downhill sections, I could feel the weight difference between it and my 125 a little more. My YZ is like a mountain bike with an engine; the Beta is a little thicker and meatier. I’d trade, though, for the ease and manageability of the climbing. I was able to ride to and experience more places instantly on the 200.

Shifting was smooth through the gears, but I could never find neutral (which was a bit annoying), but with the electric start, that didn’t seem to matter much. Thankfully, I didn’t have to kick-start it; instead, I used all that saved energy to ride longer. 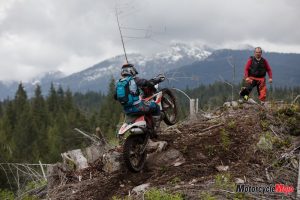 While I didn’t crash nearly as much as I do on my 125, I did have a few get-offs and the bike proved fairly indestructible, with nothing broken or bent out of shape (except maybe my ego).

The Beta 200 RR doesn’t have the counterbalanced engine, so it does vibrate a bit (but much less than my 125) and the turning radius seems quite limited, which became very obvious when I had to turn the bike around in the narrow trails for photo ops. This could become challenging in super-tight technical switchbacks, but we didn’t encounter that extreme kind of riding during the two days I rode the Beta. This would probably bother only an advanced rider.

The front brake was a bit grabby, which got me flustered a few times, but that is not a deal-breaker. Overall, the bike was extremely user-friendly and easily rideable. A lot of people on the trails commented on it and the Beta brand in particular, with one rider calling it the “quality boutique brand of enduro motorcycles.”

This bike has a great balance between power, agility and playfulness that is not only suitable for newer, smaller or younger riders, but it’s a bike that even seasoned and advanced riders can fully rail on. The Beta 200 RR is mellow enough that a rider like me isn’t going to “whisky throttle” themselves into a tree, but zippy enough to blast through more wide-open terrain and still keep up to the bigger bikes. The bike is steady and reliable, nimble and agile, light and manageable, and pretty much ticks off all my boxes.